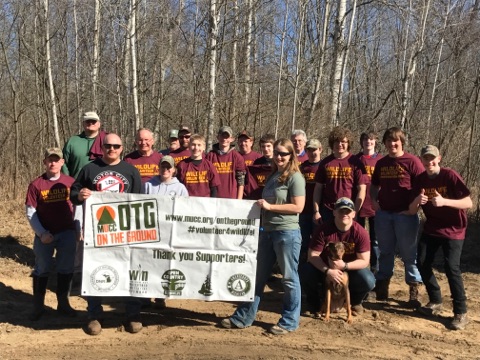 Another successful year of wildlife habitat improvement projects completed by volunteers and partnerships with MUCC’s On the Ground program has gone by. A total of 25 wildlife habitat improvement projects were completed, including 3 OTG Jr events, engaging 452 volunteers and students and investing 121 project hours (54,692 volunteer hours) into habitat work on public lands. The program reached 19 different public land areas including State Game Areas, State Forests, Grouse Enhanced Management Sites, and State Wildlife Areas. Approximately 531 acres of public lands were improved by planting 3,100 trees, building 75 brush piles for rabbitat habitat, restoring 178 acres of wildlife openings, and installing 25 wood duck boxes. See the full list of project locations and event details below to see the positive impact volunteers have made by volunteering for wildlife this year! 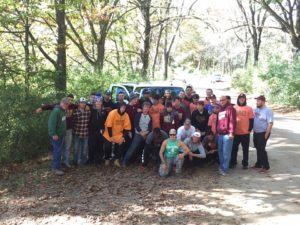 We worked with the Jackson College JETS Baseball Team to build a tracker chair accessible, natural hunting blind near the Sharonville Barn Unit and built 5 large brush piles for rabbitat near the area using black locust trees cleared from the area. 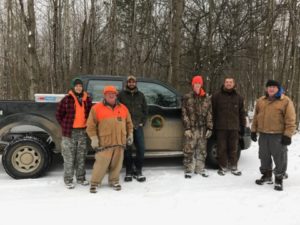 We continued efforts to promote aspen regeneration near the Fennville Farm Unit. Over-mature Aspen trees were cut to allow sunlight through for young aspen growth and 6 large brush piles were built for rabbitat. 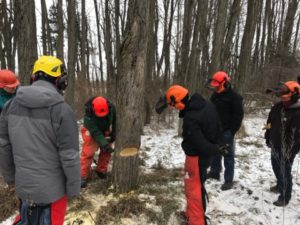 We hosted a chainsaw safety training, open to the public, and for volunteers that plan to attend future wildlife habitat improvement events. Topics covered involved why each sawyer must have a safety system, the elements of a good safety system, mental aspects of safety, safer chainsaw handling techniques, and the state-of-the-art safest way to fall a large diameter tree. There was also a second training offered on Sunday, January 8th at the Rose Lake SGA to see a demonstration of proper tree felling techniques, as well as practice skills of bucking, felling cuts, and more. 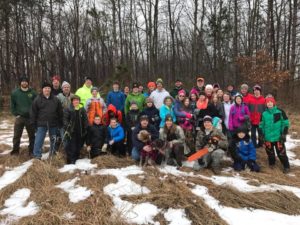 Over 40 volunteers built 50 brush piles for rabbitat with Boy Scout Troop 253 out of Vicksburg, MI as one of the scouts’ Eagle Scout project. 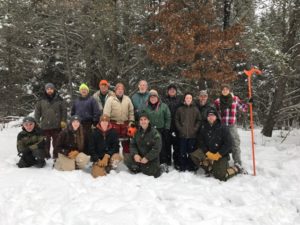 A group of 16 volunteers continued efforts to restore snowshoe hare habitat in the Grayling State Forest by hinge-cutting over 350 conifer trees to provide horizontal cover. 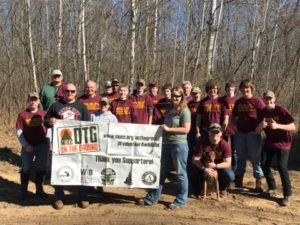 A group of 18 volunteers, including members of the Midland-Dow High School Conservation Club, continued habitat work on a wildlife opening by clearing encroaching brush and timber and stacking it into brush piles on the edges of the field. 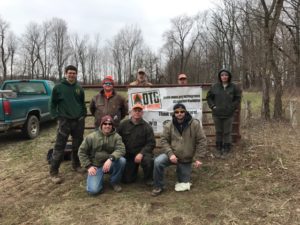 A group of 13 volunteers built 10 new brush piles for rabbitat in the North end of the Fulton SGA. 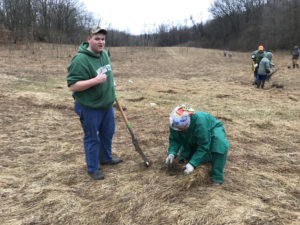 A group of 20 volunteers planted 800 crab-apple trees in the area to provide browse for wildlife. 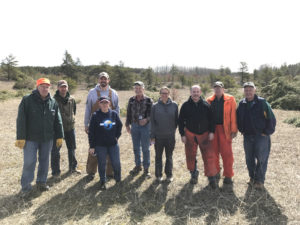 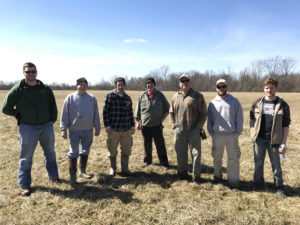 A Group of 6 volunteers built 12 brush piles for rabbitat in the Chesterfield Mini State Game Area. 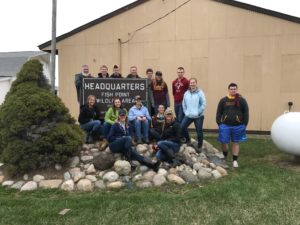 We teamed up with 16 members of the Reese High School Out-of-Doors Club to maintain and place new wood duck boxes in the area. 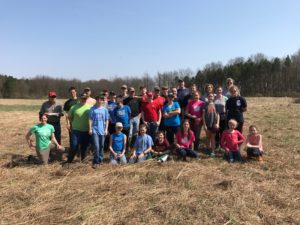 A total of 42 volunteers with Brandon Thomas from Boy Scout Troop 253 out of Vicksburg, MI to plant 1,100 trees to complete his Eagle Scout project. The trees planted by this group of Boy Scouts and Girl Scouts will provide thermal cover for deer and small game in a wildlife opening. 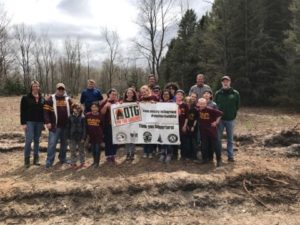 We teamed up with 16 members of the Grand Traverse Academy 5th & 6th Grade to plant a total of 93 trees for wildlife in the area. 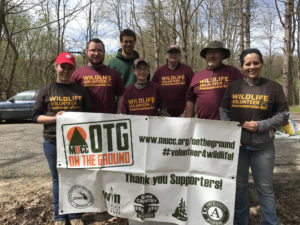 A group of 6 volunteers contributed to Earth Day by planting 600 mast-producing trees and shrubs in the area to provide browse for wildlife. 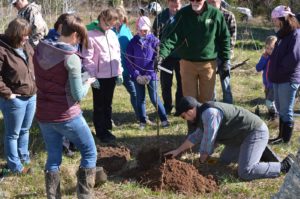 A group of 20 volunteers planted 130 crab-apple and other apple tree varieties in the Gwinn State Forest in the Southern part of Marquette County to provide browse for wildlife. 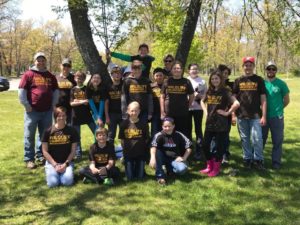 We teamed up with 16 members of the Cramer Jr High Community Service Club to remove invasive species from the area including 30 trash bags of garlic mustard, glossy buckthorn, rose bush, autumn olive, and Japanese knotweed. 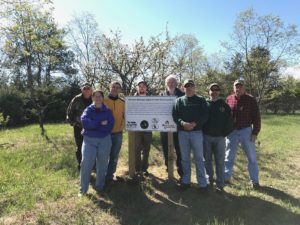 A group of 9 volunteers pruned dead branches from ~150 apple trees in a large orchard within the Grayling State Forest. 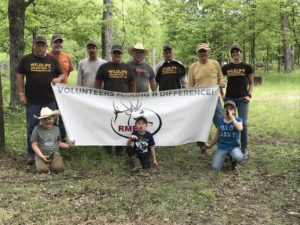 We partnered with 15 volunteers from the Rocky Mountain Elk Foundation to remove debris and completed the first phase of restoring a site for wildlife in the area such as elk, whitetail deer, and black bear. 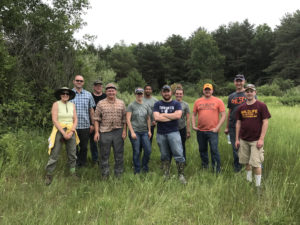 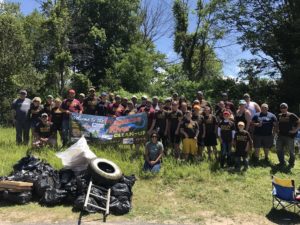 A total of 63 volunteers participated in the 3rd Annual Manistee River Clean-up to improve fish habitat and spawning areas. We partnered with Roger Hinchcliff of Steelhead Manifesto and the Metro West Steelheaders for this event and every volunteer earned some very generous prizes as donations from local companies like Lamigals, Smith Optics, Hank & Son’s Tackle, D-Loop Outfitters, Auto Value, Voodoo, Raven Tackle, Lick’em Lures, and many more! 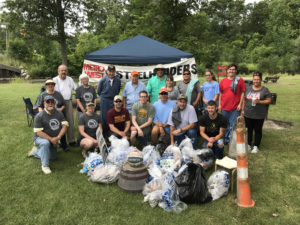 A group of 20 volunteers partnered with the Metro West Steelheaders for the fourth year to clean up a popular stretch of the Clinton River and removed ~200lbs of trash and debris! 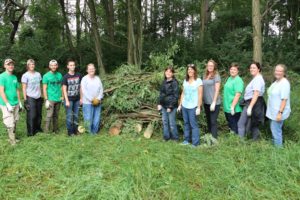 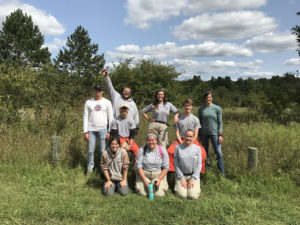 A group of 12 volunteers joined the NCCC Maple 5 crew to remove remaining timber left from a controlled burn at Inspiration Point. Herbicide was applied to the stumps after the small trees and shrubs were cut. 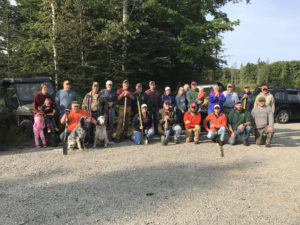 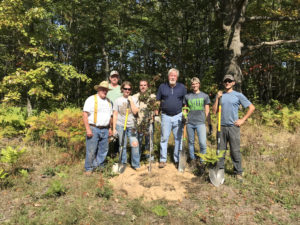 A group of 6 volunteers planted 70 crabapple trees in Camp Grayling for a project partnered with Camp Grayling, the Department of Natural Resources, and the National Wild Turkey Federation in the Grayling State Forest.

Thank you to all of the volunteers, students, hunters, trappers, and anglers that dedicated one or multiple days to improving wildlife habitat; you are an integral part of Michigan’s conservation community! Also, thank you to each of the organizations that participated in the program and continues to support our efforts. This year’s partner organizations include the Michigan Department of Natural Resources Wildlife Division, the National Wildlife Federation, the National Wild Turkey Federation, the Ruffed Grouse Society, the Metro-West Steelheaders, the Rocky Mountain Elk Foundation, Huron Pines AmeriCorps, Learn to Hunt, and MUCC affiliated clubs and members. More wildlife habitat improvement projects with OTG will be scheduled for the 2018 season soon at www.mucc.org/ontheground