As hunters, we live for the moment we might get to harvest an animal that we talk about the rest of our lives. Each hunt is special but we all know and love those stories…the ones that we know will be told around campfires and to the next generation of hunters. Maybe it’s shooting the last bird over the back of your old dog, maybe it’s the buck of a lifetime, or maybe it’s an animal so biologically unique that you might never see something like it again.

This is exactly what happened for Phil Smith, a leader of the Hendee Drain Deer Cooperative, on November 10, 2018. In campfire fashion and on deer season eve, here is his story…

“I had gotten a picture of a deer still in velvet last December and another early this fall. After studying the picture from this fall I thought the deer was an antlered doe or a buck with a testosterone issue. I estimated the age of the deer somewhere between three and four years old and sent the picture to a couple of deer managers I look up to. They verified my thoughts and I added this deer to a list that I would harvest if given the opportunity as I target bucks three years old and older.

On Saturday, November 10th I set out to hunt all day on a mobile setup. As dark faded to light, I put on my last lone wolf tree stand strap, jumped into my coveralls and climbed back into the stand. The deer were active that morning as I watched bucks chase does and a couple two-year-olds were on a mission. After passing multiple deer I noticed some movement to my left. I caught a glimpse of antler as the deer were closing in. They entered my shooting lane – a doe two fawns, and a spike in velvet.

He had a decent size body and it hit me that is was the velvet spike I intended on shooting if given the chance. I was already drawn back because this area of the property is so thick and shooting lanes are minimal. I didn’t want to miss the opportunity if it presented itself.

As I identified the deer, I released the Easton arrow and watched it fly true almost in slow motion until the fletchings disappeared. Chaos broke loose; the deer fled in every direction. Then there was silence and the flood of emotions pulling at me. ‘What a great shot,’ I told myself. The next thing I thought of was ‘I hope I identified that deer properly.’

Sitting, scanning and listening intently I decided to get down and look at the shot site. Quietly, I approach my arrow. It looked painted with rich red blood. A feeling of relief came over me and I took up the track twenty yards in.

I decided to back out to take down my stand and head up to the house. The deer went to the north, I headed to the south property line and proceeded to cross a blood trail. Did I mention it was thick? I followed the trail with my bow in hand until I reached the property line. As I look ahead I see a deer piled up 20 yards into the neighbor’s property. My phone was dead so I continued to the house and charged my phone. After taking care of my gear, I called to obtain permission to cross the property line and recover the deer. I explained the deer I had shot to the neighbor. He was very interested in seeing the unique deer.

My dad and I headed back on the old Ford 3000 to recover the deer. We walked up to it, verified velvet antlers, spread the legs and found no testicles. Strange. We loaded him up into the bucket head up to the house where the neighbor was waiting. We talked about the deer for a little while then field dressed him, rinsed him out, weighed and pulled the lower jaw for age confirmation. At initial glance,  I knew he was at least two or maybe three years old. He weighed 145 pounds. I sent a picture of the jawbone to a person I respected and he said it appeared to be three years old. I referenced my jaw aging poster and came up with three years old as well. Still wanting another opinion and a chance to talk to a DNR biologist,  we loaded the buck into the truck and head off to the Waterloo field office check station. The DNR technicians ask if I wanted the deer submitted for CWD testing. I replied yes.

‘I have an interesting one here,’ I told them. I pulled the deer out and chatted with them as I handed them the lower jaw. We settled on three years old. Unfortunately, the biologist was at a different check station but I’ll be in contact soon to answer a few questions I have about the deer. The technicians said it was the strangest deer they had ever seen.

After leaving, I went over to a buddy’s house to talk about the hunt. The buck was hung at his house and will be broken down over the next few days. CWD test results will be received in seven to ten days.

I’m very thankful to have been introduced to the great outdoors by my father and to become obsessed with such a wholesome activity that makes me feel like I am connected to a fascinating animal. Here’s to my first spike.” 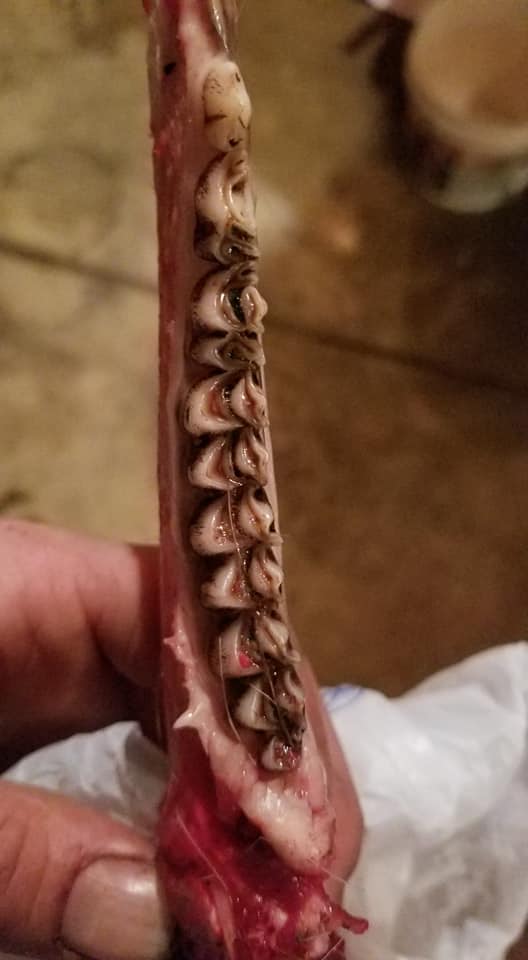 Although not a buck Phil probably planned on sharing with the hunting community, it doesn’t just serve as a great story. This buck is a testament to the hard work and power of deer knowledge.

Phil knew this deer existed because he puts time and effort into trail camera surveys that help him better understand the deer population on his land which allows him to identify specific animals.

So what about this biologically abnormal buck? The most likely scenario is that this deer suffers from cryptorchidism. Severe situations may result in both testicles remaining in the abdominal cavity. This condition results in a reduction of normal testosterone production and the antler hardening cycle. Cryptorchid bucks don’t participate in what we would consider normal buck behavior during the breeding season.

Phil also demonstrated the significance of learning how to age a buck on the hoof and by using the jawbone tooth replacement and wear method. Not only does this help with data collection, it allows a hunter/manager to get an idea of the local age structure. Cooperatives often use this information to set harvest goals when combined with other trail camera and observational data. Many people mistake a spike for a young deer; Phil was able to place him in a higher age class based on body composition and confirmed his estimate by examining the jawbone. This buck fits the age class harvest goals.

It’s also important to note that not all spikes will remain spikes. This deer, in particular, is a special case if he was, in fact, suffering from cryptorchidism. The condition would cause him to never shed his antlers, therefore remaining a spike for the duration of his life.

Congratulations on a special buck, Phil! Thank you for allowing us to share your story. You showed discipline, enthusiasm, and dedication in your harvest of this deer. I think we can all learn something from this bow hunt.