Over the last several months, there has been a great way to get kids involved in the heritage of waterfowling and keep them interested during the non-hunting season.  Both the Federal and Michigan Junior Duck Stamp contests just finished accepting applications for the year. The contests run annually and entries must be submitted by March 15, each year.  The Junior Duck Stamp Program is administered by the United States Fish and Wildlife Service and it is hosted in Michigan by the Shiawassee National Wildlife Refuge.  This is a fantastic opportunity to get your kids involved and have them show off their artistic talents.  More information can be found in the press release below.

The U.S. Fish and Wildlife Service have held a Jr. Duck Stamp Contest in Michigan since 1995 (23 years). Each year thousands of students across the nation enter the contest. In 2017, 230 students in grades K through 12 participated in Michigan. Public schools, private schools and students from home schools were represented. At each state, territory or district competition, 100 winners are chosen with one top winner, called the “Best of Show.” The Best of Show’s then compete in the national competition. One image is selected to become the Federal Junior Duck Stamp

This dynamic educational program uses principles in both conservation and design to teach wetland habitat and waterfowl biology to students in kindergarten through high school. The program provides an opportunity for students to artistically showcase their knowledge of the diversity, interrelationships and beauty of wildlife. 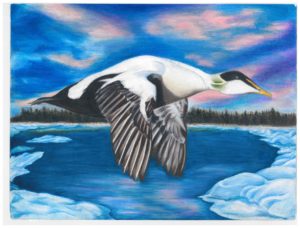 During the contest, students will be judged in four groups according to grade level: K-3, 4-6, 7-9, and 10-12.Three first, three second and three third place entries, along with 16 honorable mentions will be selected from each group. Contest judges select a “Best of Show” from the twelve first place winners, which will be submitted to the Federal Duck Stamp Office and entered into the National Junior Duck Stamp Contest held in April. The winner of the National Junior Duck Stamp Contest, along with his/her parent or guardian and teacher will receive a free trip to the First Day of Sale ceremony in late June/early July.

The first place art from the national contest is used to create a National Junior Duck Stamp each year. The Junior Duck Stamp is available for $5 from the U.S. Postal Service and from many National Wildlife Refuges. Proceeds from the sale of the stamps support conservation education and provide awards and scholarships for participating students, teachers and schools.

For additional information or if you have questions regarding your student’s or school’s participation in the Jr. Duck Stamp contest, please contact your Jr. Duck Stamp State Coordinator Lionel Grant, (989) 759-1669, Lionel_Grant@fws.gov.

If you weren’t able to get an entry in this year.  Keep it in mind for next year!