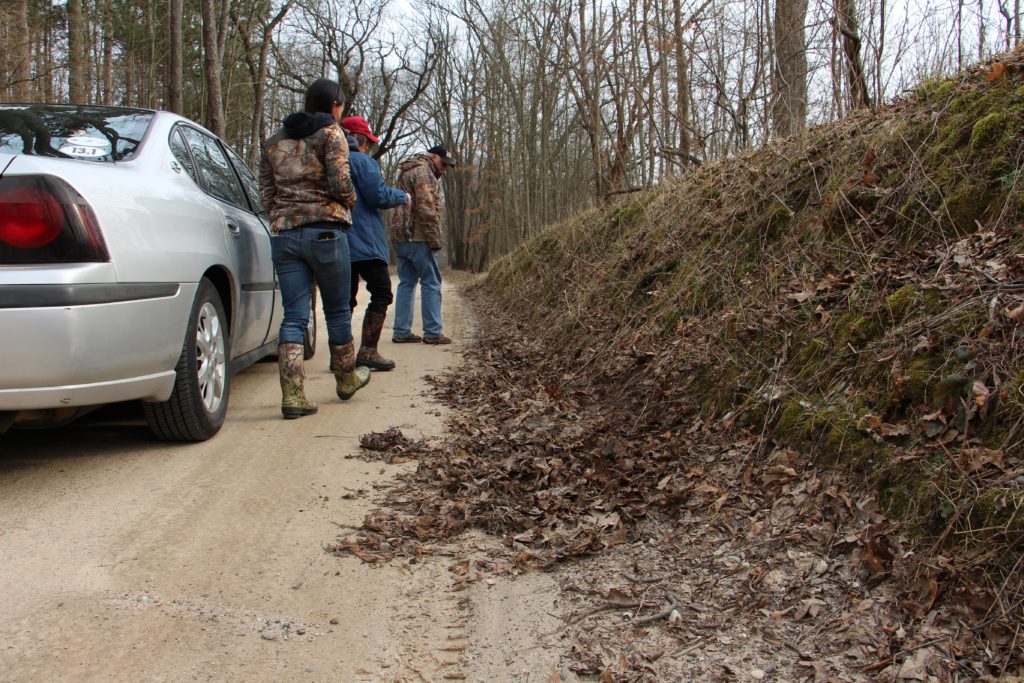 I recently read a few articles about hunting heritage and how hunting is being portrayed differently in the modern day by media to the future generation of hunters. One of the articles mentioned the importance of introducing hunting to a new person each year; how else are we going to diverge from the misconceptions of hunters that are portrayed by anti-hunters and poachers? That person you introduce to hunting may be a friend, a co-worker, spouse, a family member, or a complete stranger you choose to share your experience with. Reflecting on the past few hunting seasons, I feel pretty darn good about the experiences I’ve shared with new hunters. Just last night I took part in the second phase of the Learn To Hunt: Turkey program as participants scouted for turkey signs in the Barry State Game Area.

Steve Sharp, Al Stewart, and a few other mentors demonstrated different bird calls that turkeys will often gobble back to, described the difference in hen and gobbler tracks and scat, and described various signs to look for in the dirt that turkeys make. The twelve participants and four mentors split up into four small groups to scout different parts of the Barry SGA last night. Each group was given a checklist for a scavenger hunt that included turkey tracks (for both hen and gobbler), dusting bowls, scratchings, strut zones, turkey feathers, scat, and various other bird calls as well. You’d be surprised how much you can learn about your surroundings in nature from a hunter, from the soil, the vegetation, the wind and weather, to the many sounds and calls of other birds and wildlife. Each of these are essential aspects to pay attention to when you’re scouting or hunting; not just the species itself that you’re hunting. 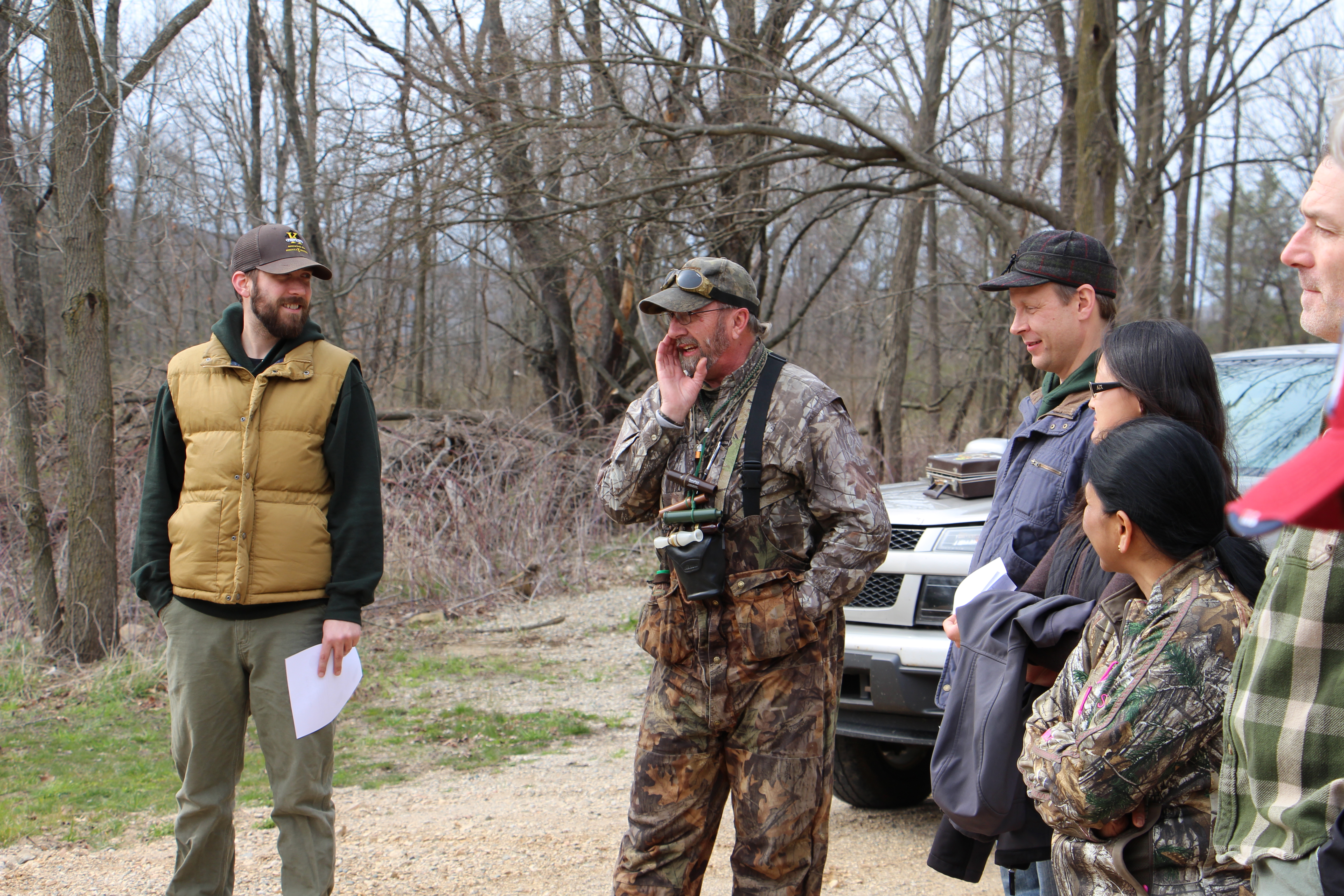 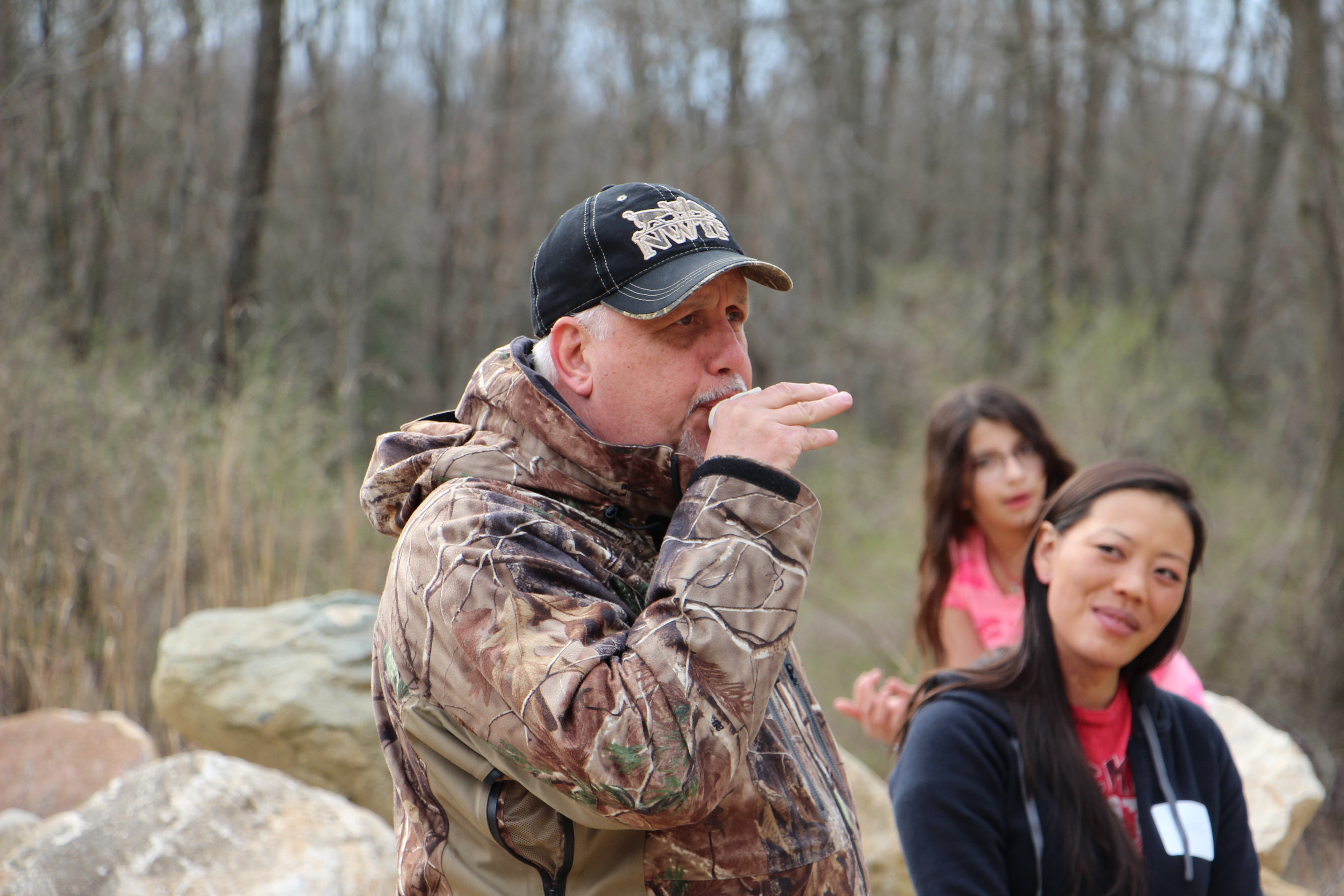 I paired up with mentor Steve Sharp of NWTF, Johanna Dart, and participant Donna. Donna is an avid deer hunter but has never hunted turkey before. She is participating in the Learn To Hunt: Turkey program with her sister, Dawn. The four of us started off down the paved road towards a destination Steve had in mind to begin our scouting scavenger hunt. There’s just something about the sound tires make when they’re transitioning from pavement to a dirt road that has always felt like an immediate rush of freedom to me. Any stress I’ve carried through the day, any worries I have, they don’t dare leave the paved roads. In fact, you can do a great amount of scouting for game just by driving around. 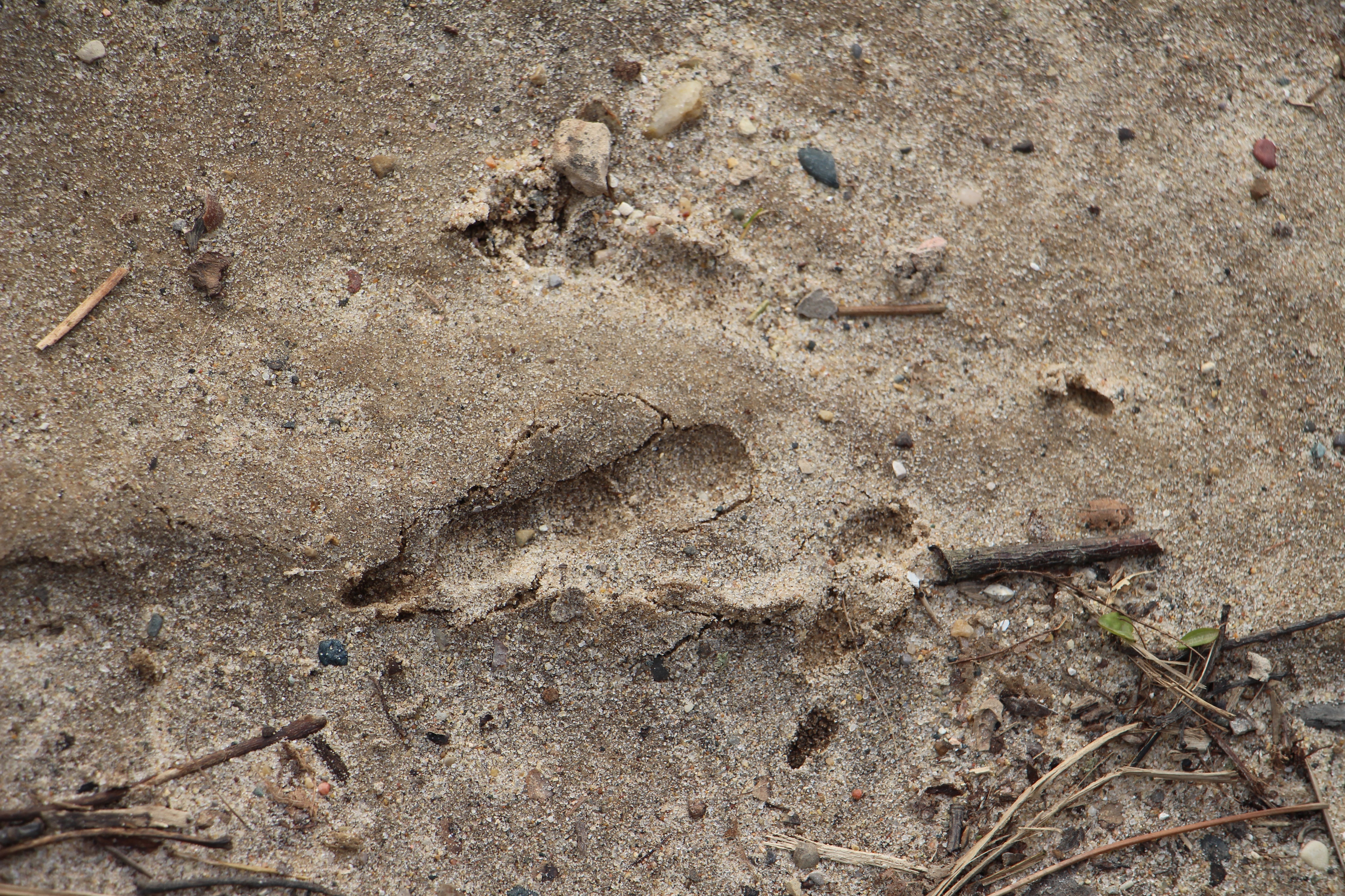 Just a short distance down the first dirt road we turned down, Steve pointed out what just looked like a pile of leaves that had blown across the road. We stopped and got out of the car to investigate. The leaves strewn across the road were the result of a turkey scratching, the gobbler tracks to prove it weren’t far off either; two things checked off our list! As we drove further along, our surroundings seemed to become wilder as various sounds of birds became louder and we spotted more wildlife; sand-hill cranes, turkey buzzards, crows, and squirrels. Not all of our scouting was able to happen from the car, though. 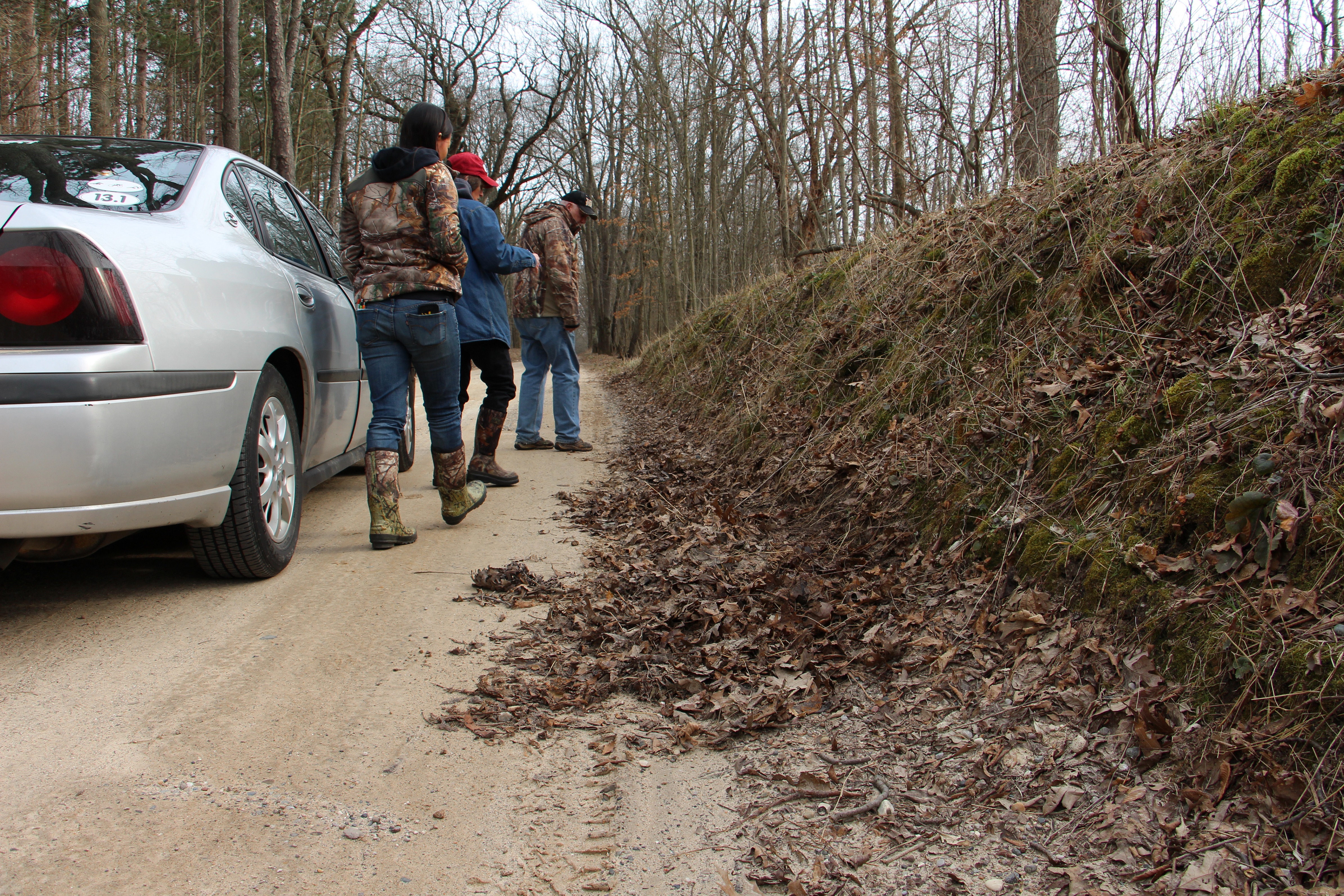 We walked into a secluded food plot and along the way found several other tracks including turkey, coyote, and deer. We observed where deer had browsed buds off of small shrubs and tree branches and where turkey had found some plant shoots to eat along the roadside. We walked stealthily in hopes of seeing a gobbler and his hens in the food plot, stopping a few times for Steve to imitate a barred owl call to get a response from any nearby turkey. The turkeys weren’t feeling social this evening, but they were definitely there. We found old and fresh scat, tracks, and even a dusting bowl complete with a feather nearby! It was all very humbling and exciting as we walked in silence just taking in all of the wild sounds, scents, and views. We walked out just as the sun was setting; a beautiful end to a beautiful evening. 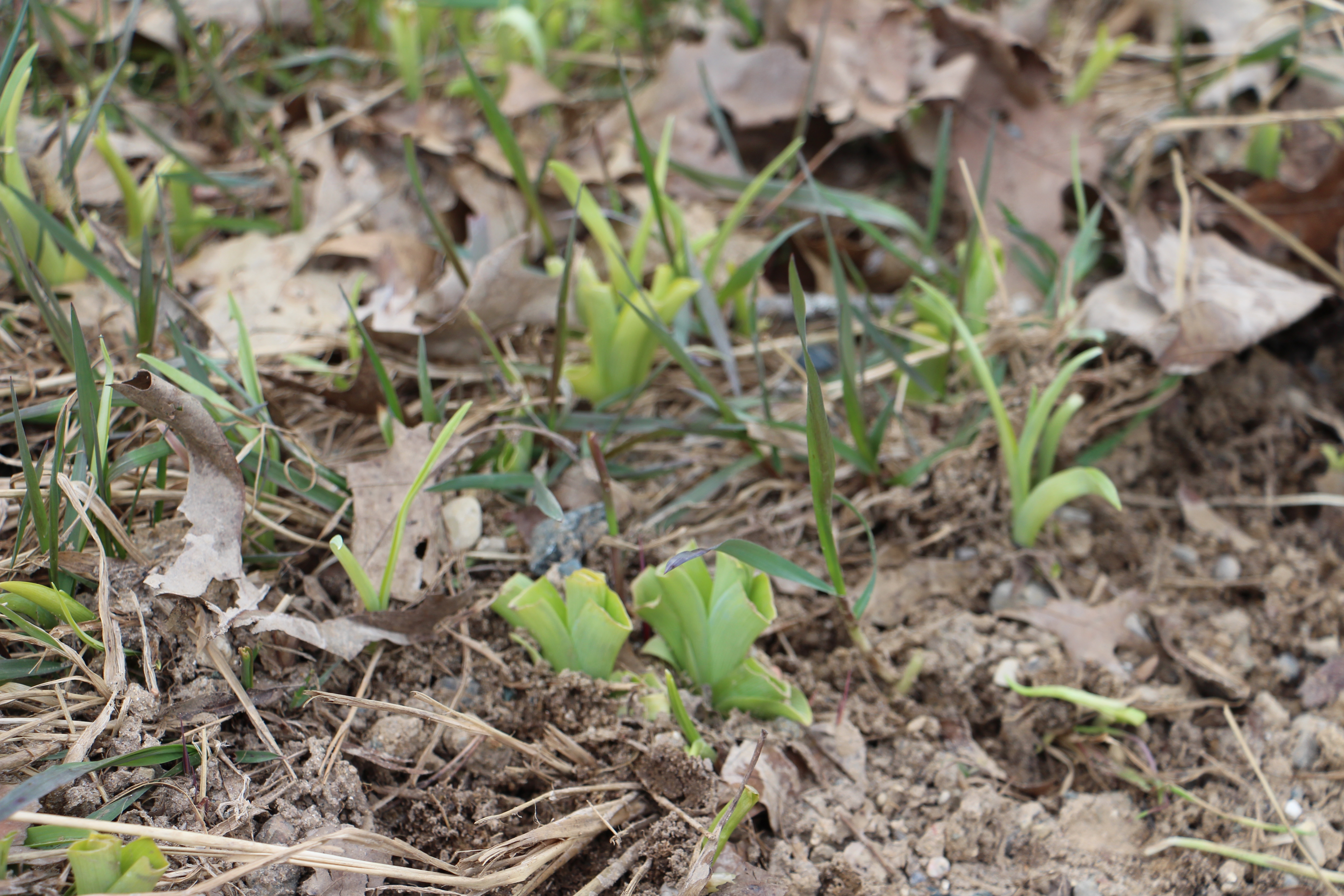 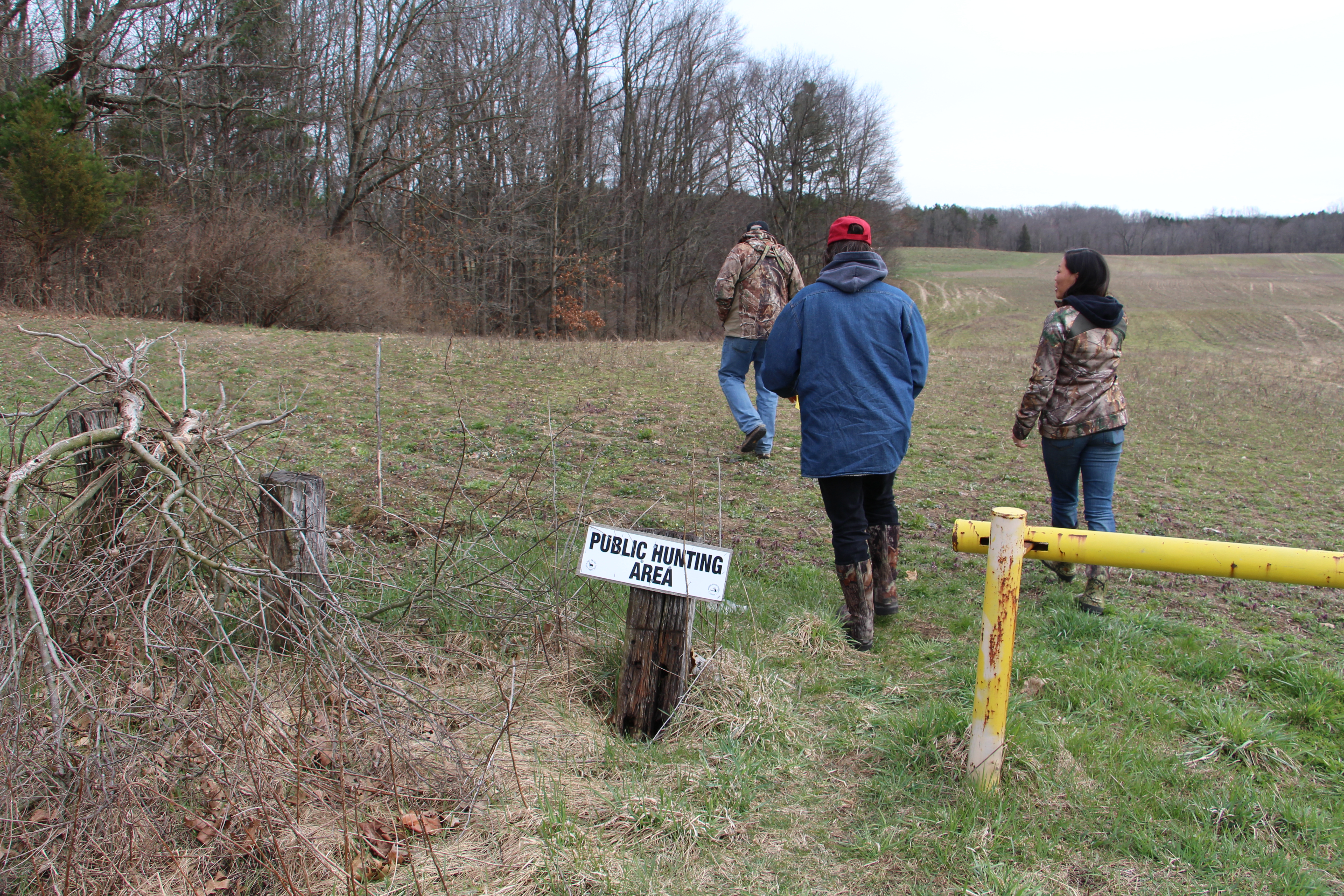 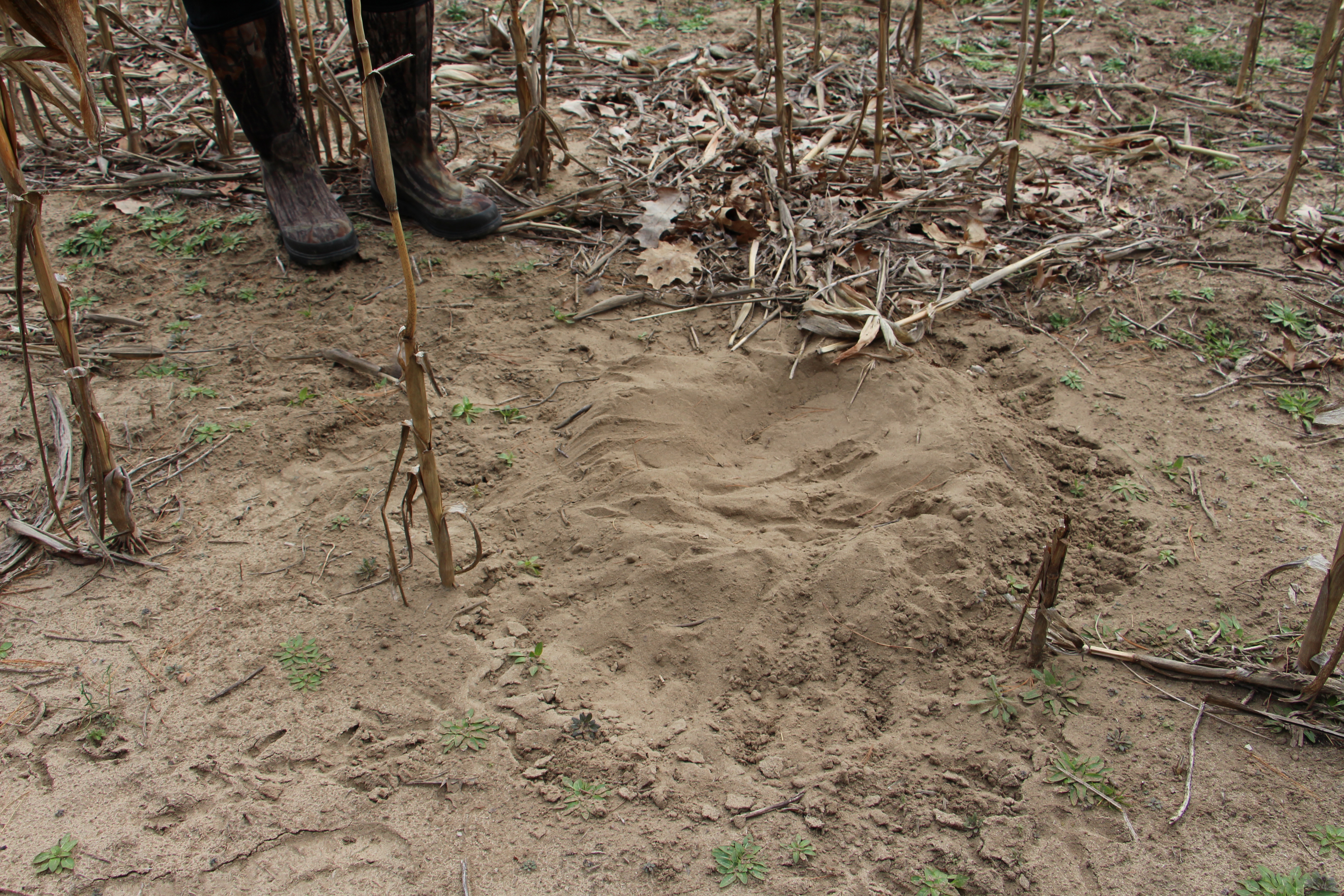 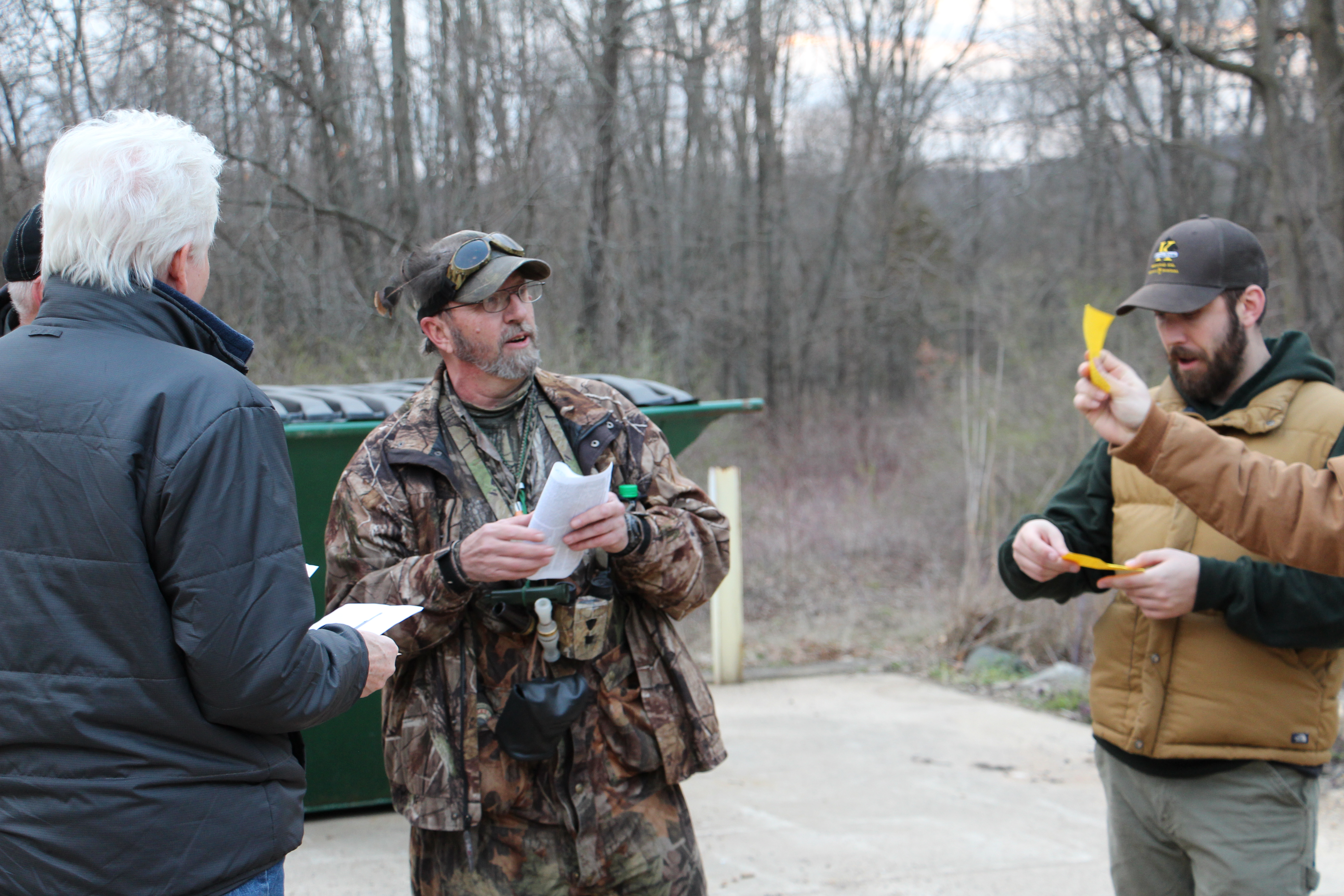 Every group found a majority of the items on their checklists and became more than amped up for the mentored hunt weekend at the end of May. I look forward to attending the weekend event that will be filled with opportunities to pattern shotguns, hunt, learn more about hunting ethics and turkey biology, and sit around a campfire with a great group of new hunters. I’m continuously grateful for public land and the opportunity to promote hunting in a good light through events like this. These are the ethical hunters that will continue to portray a good image for hunters and give back to these public lands by buying licenses and supporting wildlife habitat programs. Check out the upcoming opportunities to volunteer with MUCC’s wildlife habitat program here!