Michigan’s 2015 black bear hunting season came to an end in October, and we now have the preliminary registration results. Statewide 1,625 bears were harvested by state-licensed hunters in 2015 (which does not include tribal harvest of another 71 bears), meaning bear harvest increased about 12% since 2014 as success rates climbed yet again.  However, Michigan’s current harvest level remains about 30% below the peak harvest occurring in 2006 of 2,400 bears. Regulations and quotas are on stabilized 2-year cycles, so no changes are supposed to be made until 2017. But that didn’t stop many bear hunters and the DNR, at the most recent Bear Forum meeting in St. Ignace, from proposing lots of ideas on how to ensure a stable to growing bear population in the face of higher success rates and address other issues regarding commercial guiding and bait. 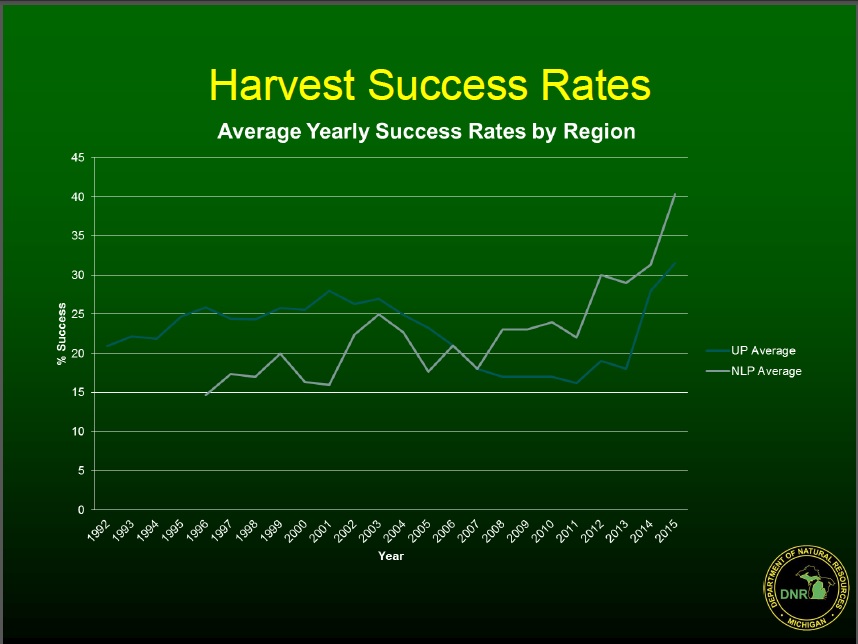 With the recent trend of increased success rates, 2015 was no different.  Zone 1, which includes all of the Upper Peninsula, had a licenses quota of 6,131, and a desired harvest of 1,126 bears.  With an increase in expected hunter success rates,  1,317 bears were registered across the U.P., meaning that Zone 1 was 17% over the desired harvest recommended by the DNR.  The average hunter success rate across the U.P. was 21 percent, but this varied widely from a high of 60 percent success rate in the Amasa Bear Management Unit (BMU) first hunt period to 9 percent success in the Gwinn BMU third hunt period.

In Zone 2, located in the Northern Lower Peninsula, there was a license quota of 820, with a desired harvest of 248 bears.  The bears registered for the NLP ended up being 308, which resulted in being 24 percent over the desired harvest for the year.  Again, hunter success varied widely, ranging from a low of 23 percent success in Gladwin BMU to a high of 61 percent success in Baldwin BMU.

Of the bears harvested in both the zones, the sex distribution’s ranged from 33 to 56 percent of the harvest by unit made up of female bears.  Statewide, 923 male bears were harvested and 716 females, resulting in 43 percent of the take consisting of females. In the two zones, the tribal harvest totaled 71 bears registered, with the highest number of bears (36) coming from the Newberry BMU.

This increase in success rates across many BMUs has many hunters talking about how that might (or should) impact future license quotas. At this time, there will be no proposed changes of quotas based on these hunting results until the 2017 regulation cycle. However, tribal license allocation is set to increase to 12.5 percent of the total license quota in 3 BMUs due to an automatic trigger outlined in the 2007 Consent Decree, which negotiated terms with the tribes over their hunting and inland fishing rights. This will likely reduce state licensed hunter licenses available in 2016, although that change will go through the process of the Natural Resources Commission this spring.

In addition to quotas, the other hot topics discussed was commercial guiding, the use of chocolate in bear baits, and the 2 percent cap on non-resident licenses.

MUCC will continue to be engaged in and follow these discussions as they may provide opportunity for action in the coming 18 months.

Posted in Policy
← INVASIVES ALERT: HOW YOUR AQUARIUM MIGHT HAVE A "RIPPLE" EFFECT IN MICHIGANDNR CONSERVATION OFFICERS SEEK INFO ON BARAGA COUNTY MOOSE POACHING →