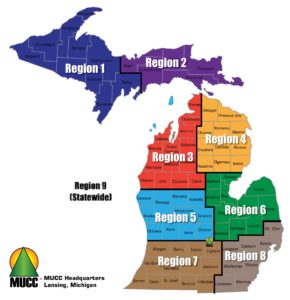 At the 2015 Michigan United Conservation Clubs (MUCC) Annual Convention, delegates approved a major restructuring of the Board of Directors, organizational structure, and the governing bylaws for the 78-year old organization. These changes will preserve the opportunity for continued involvement with MUCC members as well as protect the “grassroots” nature of conservation policy adoption and engagement, while at the same time securing the organization’s future through an improved governance process.

“The future of the organization is our responsibility”, said the MUCC’s newly-reelected President Ron Burris to convention delegates. “The new structure will provide stability to ensure that MUCC is well-prepared to thrive for another 78 years in uniting citizens to conserve, protect and enhance Michigan’s natural resources and outdoor heritage.”

Under these changes, MUCC’s twenty districts across the state will be combined into eight geographical regions and 1 “region” consisting of affiliated clubs that have a statewide membership and mission (see map on reverse).

The new Executive Board will be a 17-member body that will handle the governance and fiduciary responsibilities of MUCC, including:

A complementary Conservation Policy Board will be established consisting of up to 40 voting members and chaired by the Vice President:

The Conservation Policy Board is a new concept designed to increase the reach and involvement of affiliate clubs and individual members across the state—while there are elected members of the Board, any MUCC member will be invited to attend, learn, and voice their opinions on hunting, fishing, trapping and other conservation issues. At their quarterly meetings, the Conservation Policy Board will interact with experts on emerging topics through presentations and panel discussions and the Board will vet proposed policy resolutions to move on to the voting delegates of the Annual Convention. MUCC’s Annual Convention will continue to invite every affiliate club to participate in the only grassroots policy development process of its kind.

These new bylaws will go into effect next summer to allow for the election of officers of both the Executive Board and the Conservation Policy Board to occur at the 2016 Annual Convention, which will be June 17-19, 2016.