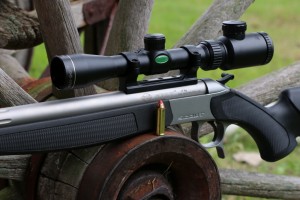 Pictured is a typical gun chambered for .44 that will be allowed this fall. Special thanks to Gabe VanWormer (photos) and Mark Klett for their assistance!

There are some changes to this year’s firearm deer hunting regulations that hunters, law enforcement, and local government officials in Southern Michigan should be aware of, but not be concerned. For 2014, a new regulation has allowed the use of certain low-powered rifles and air rifles in the traditional “shotgun zone.” This rule change was strongly supported by MUCC members at their 2010 Annual Convention, and was promoted by Rep. Matt Lori (R-Constantine) through HB 4283, and ultimately adopted by the Natural Resources Commission this summer.

In short, the relevant language redefines the “shotgun zone” as the “limited firearms deer zone” and adds the following to the list of allowable firearms in Southern Michigan:
“(d) A .35 caliber or larger rifle loaded with straight-walled cartridges with a minimum case length of 1.16 inches and a maximum case length of 1.80 inches.
(e) A .35 caliber or larger air rifle or pistol charged only from an external high-compression power source such as an external hand pump, air tank, or air compressor.” 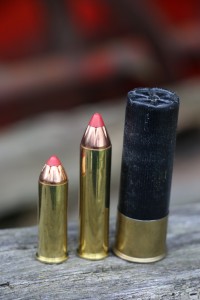 A comparison of a (left to right) .44mag, .460 S&W and a 12ga shell. The .44 will be the most popular cartridge and the .460 will be the upper end of the size allowed.
These new deer hunting regulations were carefully crafted to only include rifles and ammunition that are lower in power than existing shotguns and muzzleloaders that have been in use for ages. These same firearms have also been in use in the Northern two-thirds of Michigan and Indiana for a number of years. From a safety standpoint, these are no more powerful, louder, or long ranging that the existing tools available. But what it does provide is more opportunities for youth and smaller hunters that prefer a better fitted firearm with less recoil, as well as air gun enthusiasts anxious to use their unique firearms in the field.

So what kind of firearm/ammunition fits within this definition? Any cartridge that meets the length requirement and is not bottle-necked, which includes most of those currently allowed for handgun hunting in Michigan.The real list of cartridges that will be used is actually very short, simply using the parameters in the regulation. By far the single most popular and (relatively) easy to find offering will be the .44 mag; Then the .357mag and .45 Long colt. Those such as the .460 S&W, .500 S&W, .41 mag, and a few other obscure cartridges are only open to those that handload ammunition, and are custom single shot barrels only.

We hope that if you have any neighbors or local officials with concerns about this expansion of new tools in Southern Michigan or deer, deer hunting or firearms in your community, that you can point them to this information or refer them to Michigan United Conservation Clubs and any of our staff would be happy to answer any questions at 517-371-1041.