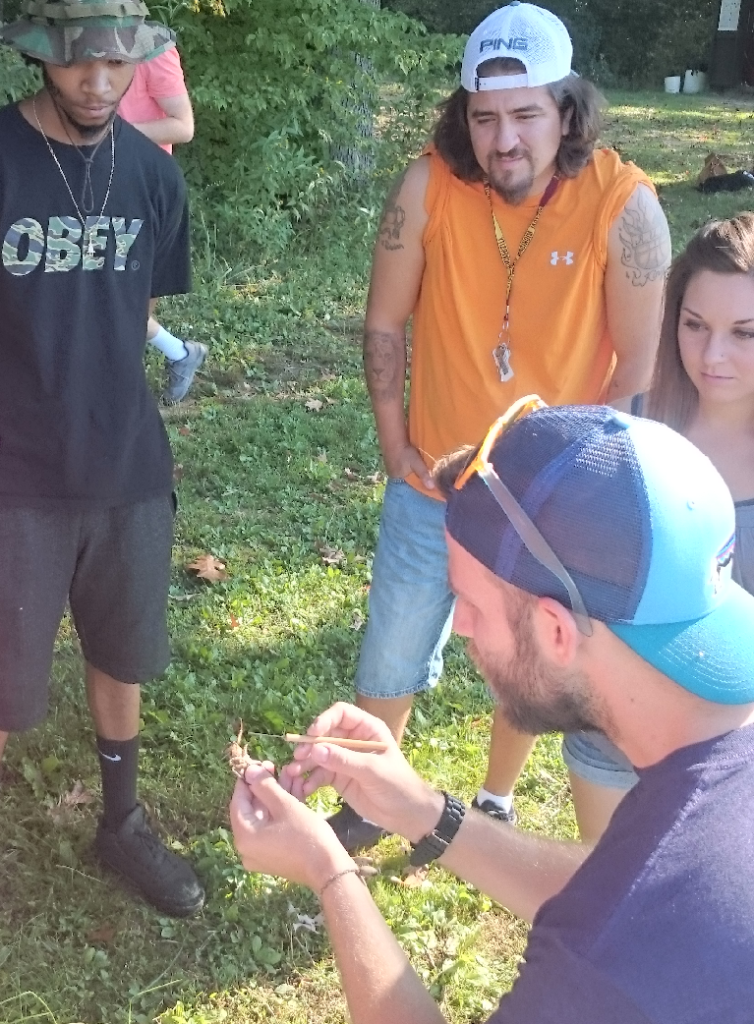 Introducing people to the outdoors is one of my favorite parts of the work I do.  During the last week of September, Camp Director Tyler Butler and I had a chance to work with some non-traditional students from the Lansing area.   We held an outdoor education day for a group of students from the Lansing School District Workforce Investment Opportunity ACT Program.  These students range in age from 18-22 and have returned to school to complete their studies for a GED.

For the students, the day started with a one-hour bus trip heading out of Lansing and down to camp in Chelsea.  During this time, they played macroinvertebrate bingo, to prepare for some of the activities when they got to camp.  Upon arriving at camp, the students started with an icebreaker game so Tyler and I could learn their names and introduce them to the facility at Cedar Lake.

Once introductions were over and the students had a feel for how the day would go we headed down to the lake.  On a day where the late September thermometer was going to hit 92 degrees, the lake was going to be a high activity area.  At the lake, Tyler was waiting to run one of his favorite programs.  He had a 5-gallon bucket full of macroinvertebrates ready to show the kids.  After talking about biotic and abiotic components of an ecosystem, he started pulling the macros out of the bucket.  He showed the students, dragonfly larvae, large water beetles, and even a couple crayfish.

While some of the group was freaked out and not impressed by the insects, others readily grabbed nets and headed into the water to catch some bugs for themselves.  Even one of the group’s teachers Mr. Dickerson rolled up his pants and joined the students.  The students caught several different species of aquatic insects, but the highlights seemed to be a small frog and a baby snapping turtle.

Moving on from the lake, we headed to the archery range.  In this group, most of the students were first time shooters, so we focused on an introduction to the equipment and getting arrows on target.  As the session progressed, several of the students had improved enough to hit the bullseye and turned around to see big smiles and applause from their peers and instructors.

After archery, we had a quick break for lunch and a time for us as instructors to talk about the path we took to get in our careers.  We also spent a bit of time talking about how public lands are funded, and how the license fees for activities like fishing pay for the management of the resources.

With just a few hours left in the afternoon, we took the group on a hike of the property and gave them some time to observe the woods and feel the stillness of the forest compared to the hustle and bustle of the city.

We wrapped the day up back at the lake, giving the group a chance to hit the water to do some fishing.  The bite was a bit slow during the middle of the afternoon.  However, a few of the students caught fish and one student swears a huge fish broke his line. 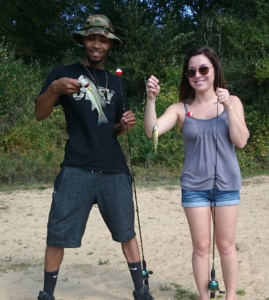 Students show off their catch of the day!

As the day concluded, it was nice to reflect on another successful event. This group is an often-overlooked population because they are not “typical kids” and they may have had a bumpy road to get to the point they are in their life.  However, they should be commended for trying to get things back on track in their lives. At MUCC, a focus of our mission is connecting people to engage in the outdoors and we were happy to have the chance to work with this program and get them outside.