In appropriate fashion, volunteers celebrated the official first day of Autumn on September 22 out in the field constructing rabbitat at Keeler State Game Area.  It was a crisp, cool start to the morning as nearly twenty volunteers made their way to the meeting point for the morning. Under the direction of Nate DeVries and myself, we sent the group off to start felling trees that would become the rabbitat structures later in the day.

Many of the volunteers that day were from the Michigan State University Ducks Unlimited chapter.  These college students awoke before the sun and made the nearly two hour drive to come down to southwest Michigan for the sake of conservation, which speaks volumes to their organization and the quality of individuals involved. Others who came out were from the surrounding area who have been hunting the area for many years and came to do their part for their local landscape. 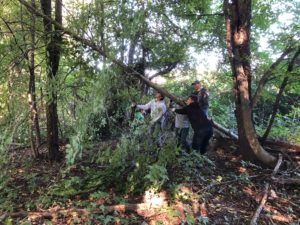 Throughout the morning, the individuals worked in groups to build piles around the state game area and made quick work of the task at hand.  When lunchtime rolled around, there were over twenty piles built and ready for their inhabitants to make their homes within.  Over lunch deliberations, it was decided that we would call it a day, as many volunteers had plans for the afternoon and the quality and quantity of work done was deemed satisfactory by all.

We would like to thank both Nate DeVries and Don Poppe from the Michigan Department of Natural Resources for working so diligently with the On The Ground program and ensuring the success of the day. Relationships and willingness such as this are what allow the program to continue thriving and succeeding.

Coming up next for the OTG program is two junior events: one at Rose Lake State Game Area in Bath on October 3, and another at the end of the month at Petobego State Game Area near Elk Rapids. We’re ready and anxious to get outdoors with the kids in the cooler, crisper fall weather.

Posted in On The Ground
← Tips for Hunting with your kidsIn the Field: 5 Ways to Become a Better Deer Manager (from your tree stand) →