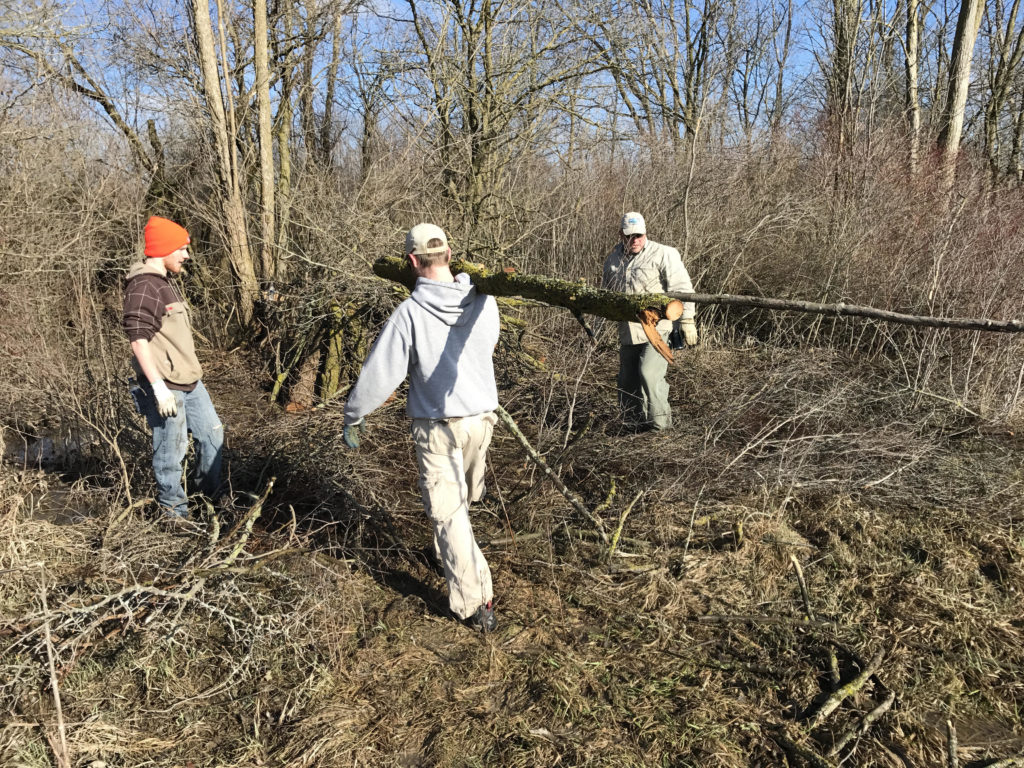 Volunteers with MUCC’s Wildlife Habitat Program have already completed three wildlife habitat improvement projects in the past week and a half! Crabapple trees were planted in the Southwest region, brush piles were built for rabbitat in the Southeast region, and Scotch pine was removed from a Jack pine plantation and brush piles were built in the Northeast region of the state.  Volunteers local to each area dedicated a day to make a lasting impact on the areas wildlife habitat. Each project was determined in coordination with the areas DNR Wildlife Biologist or Technician based on the current Wildlife Management Plan. There are several more upcoming events to improve wildlife habitat in various regions of the state; see details and RSVP to volunteer here! 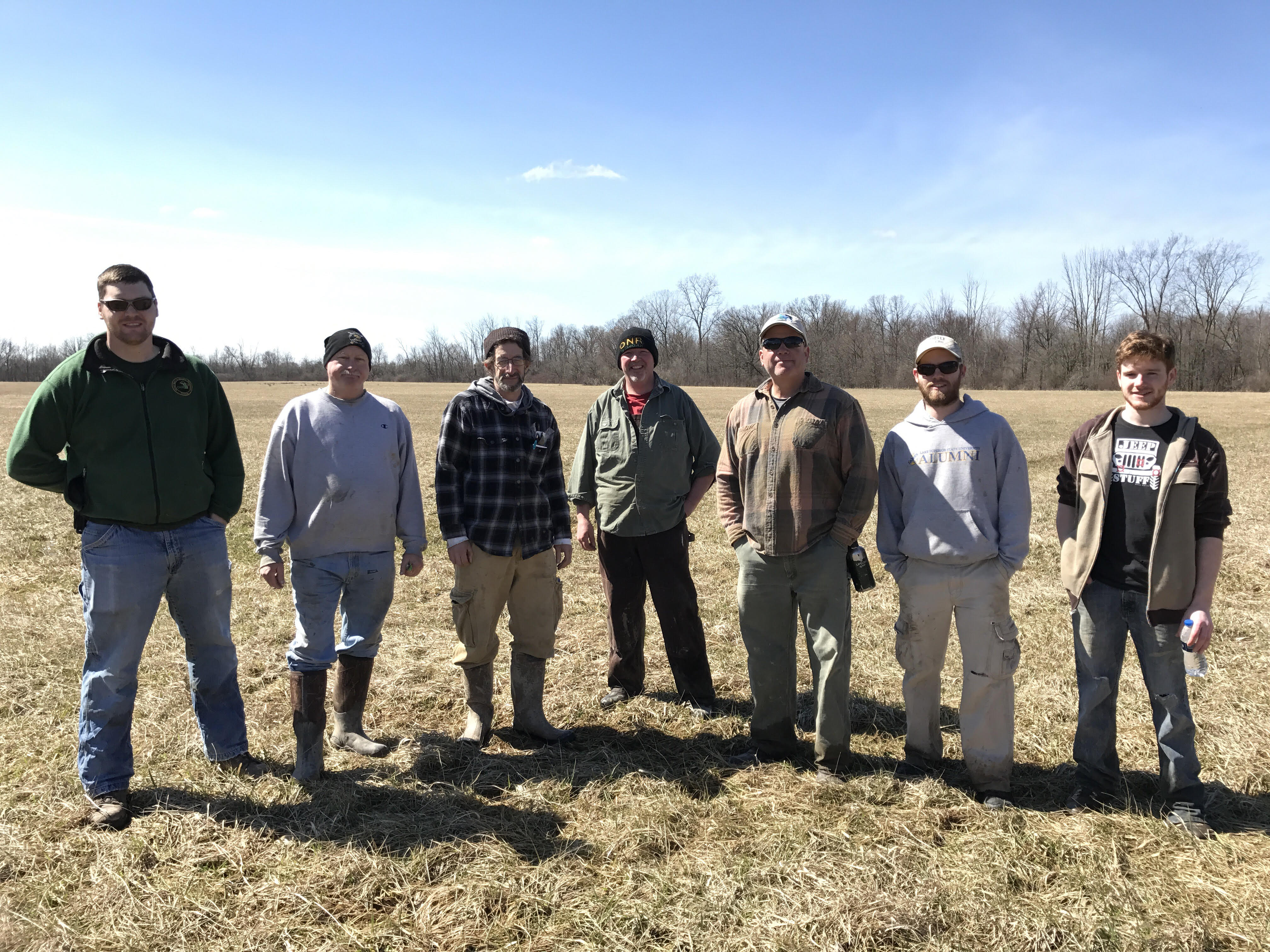 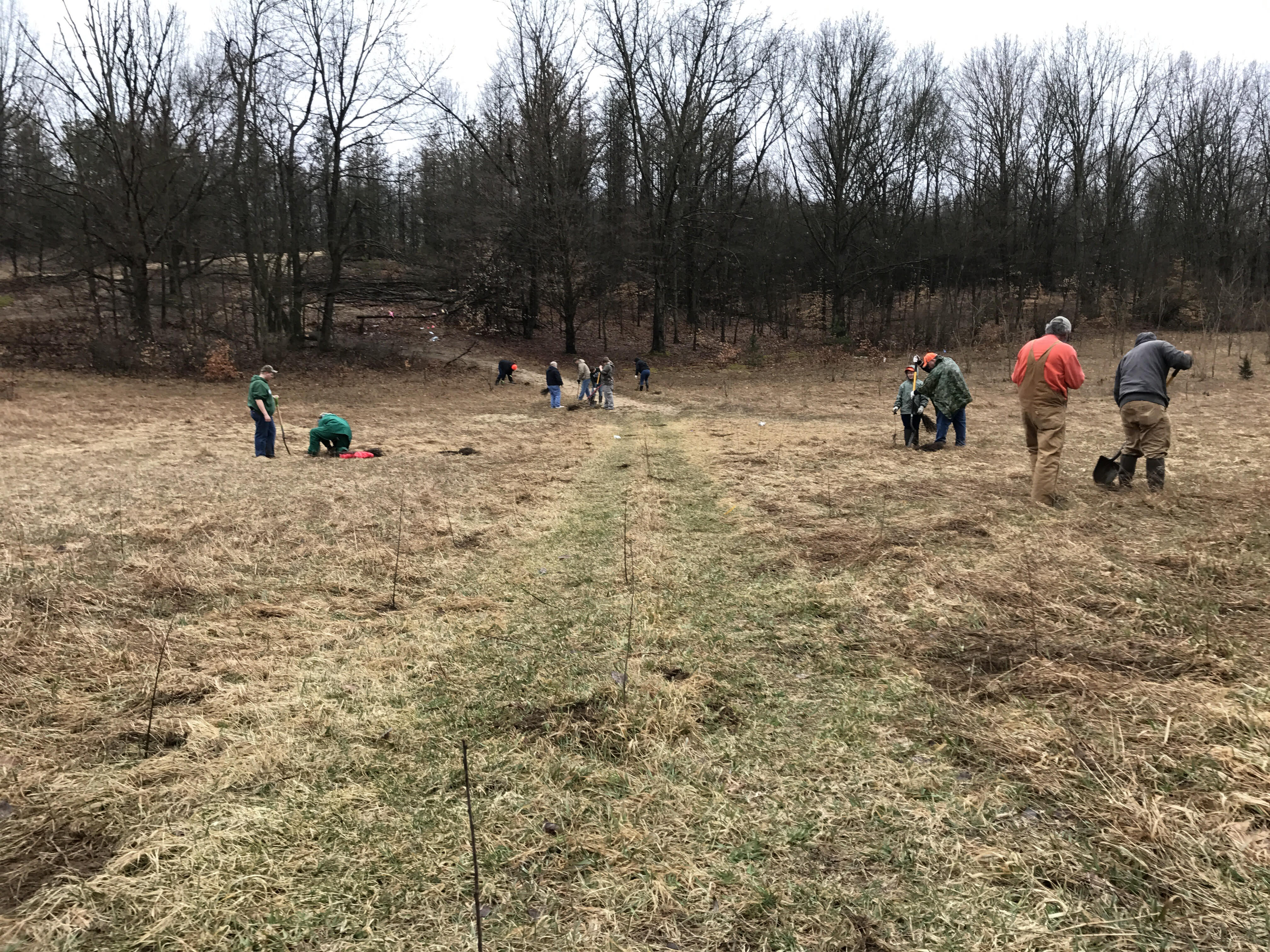 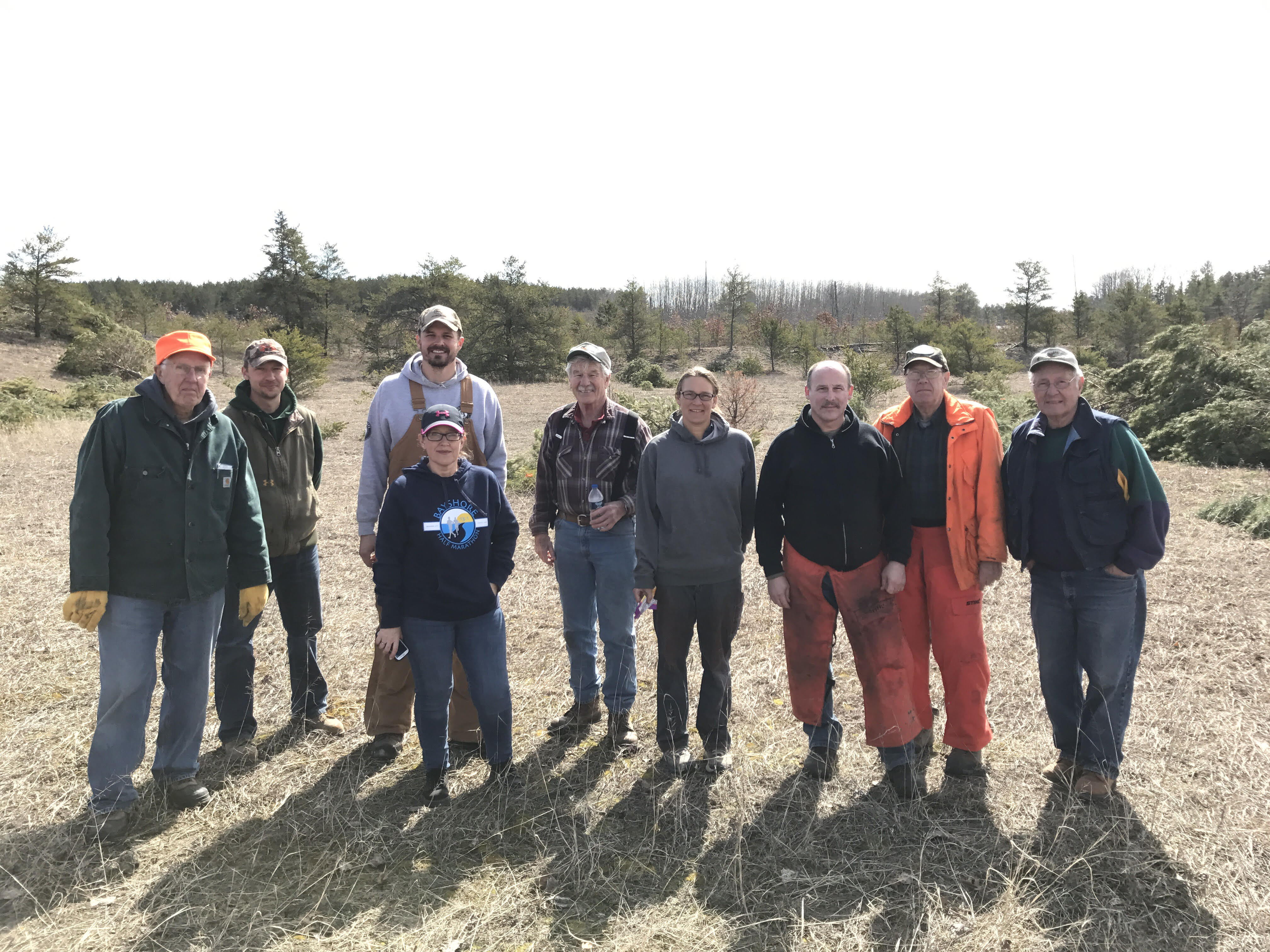 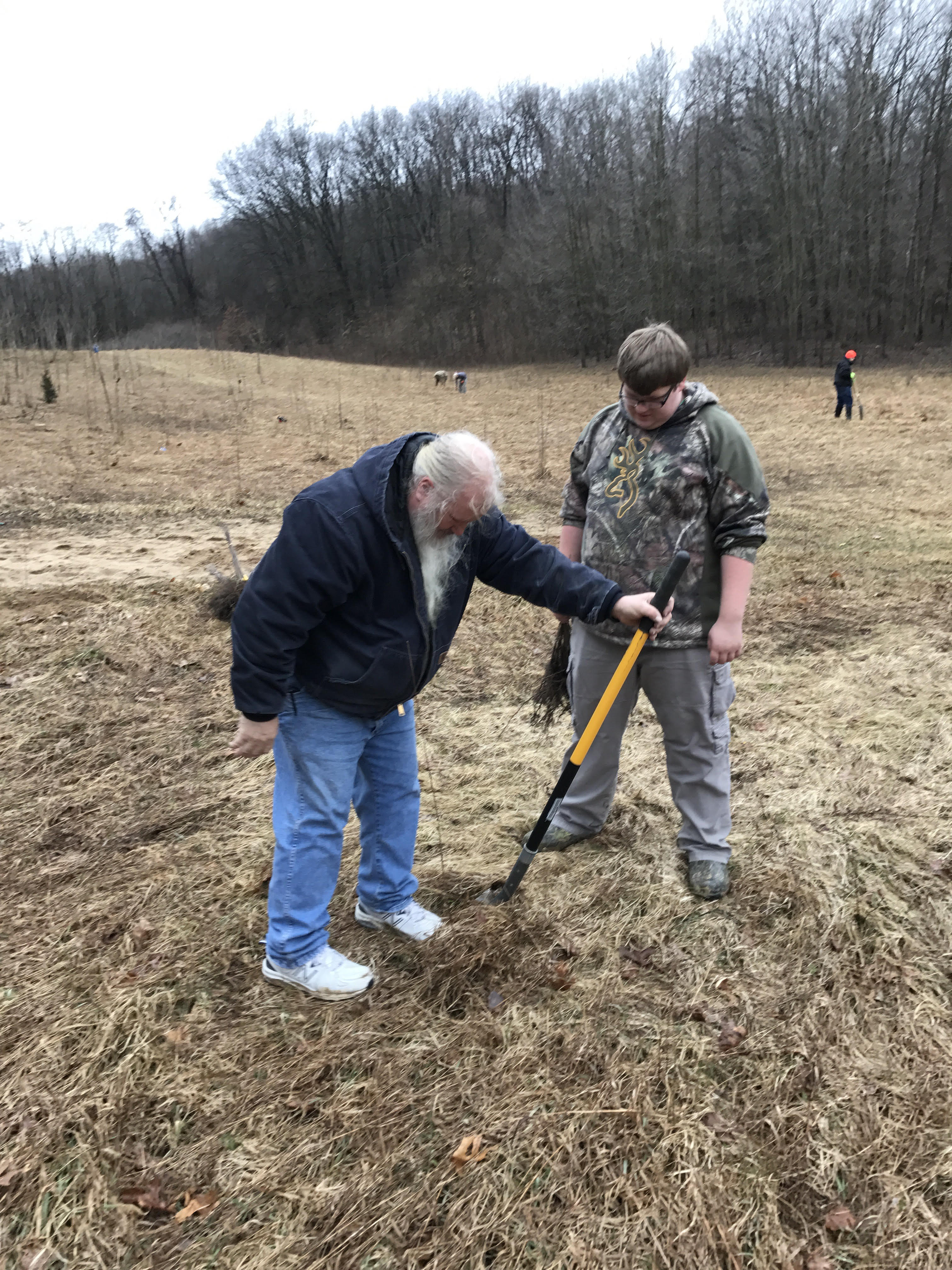 Last Saturday, on March 25th, a group of 20 volunteers planted 800 crabapple trees in the Middleville State Game Area. Many of the volunteers were local to the area while some traveled from the Grand Rapids area. This was the first time visiting the Middleville State Game Area for almost all of the volunteers. The area being planted was a wildlife opening that has been having access issues from vehicles tearing up the area. These trees will not only provide browse for the area’s deer and turkey, but also deter vehicles from driving through the opening. This project area was determined by the areas DNR Wildlife Biologist, Randy Heinze. 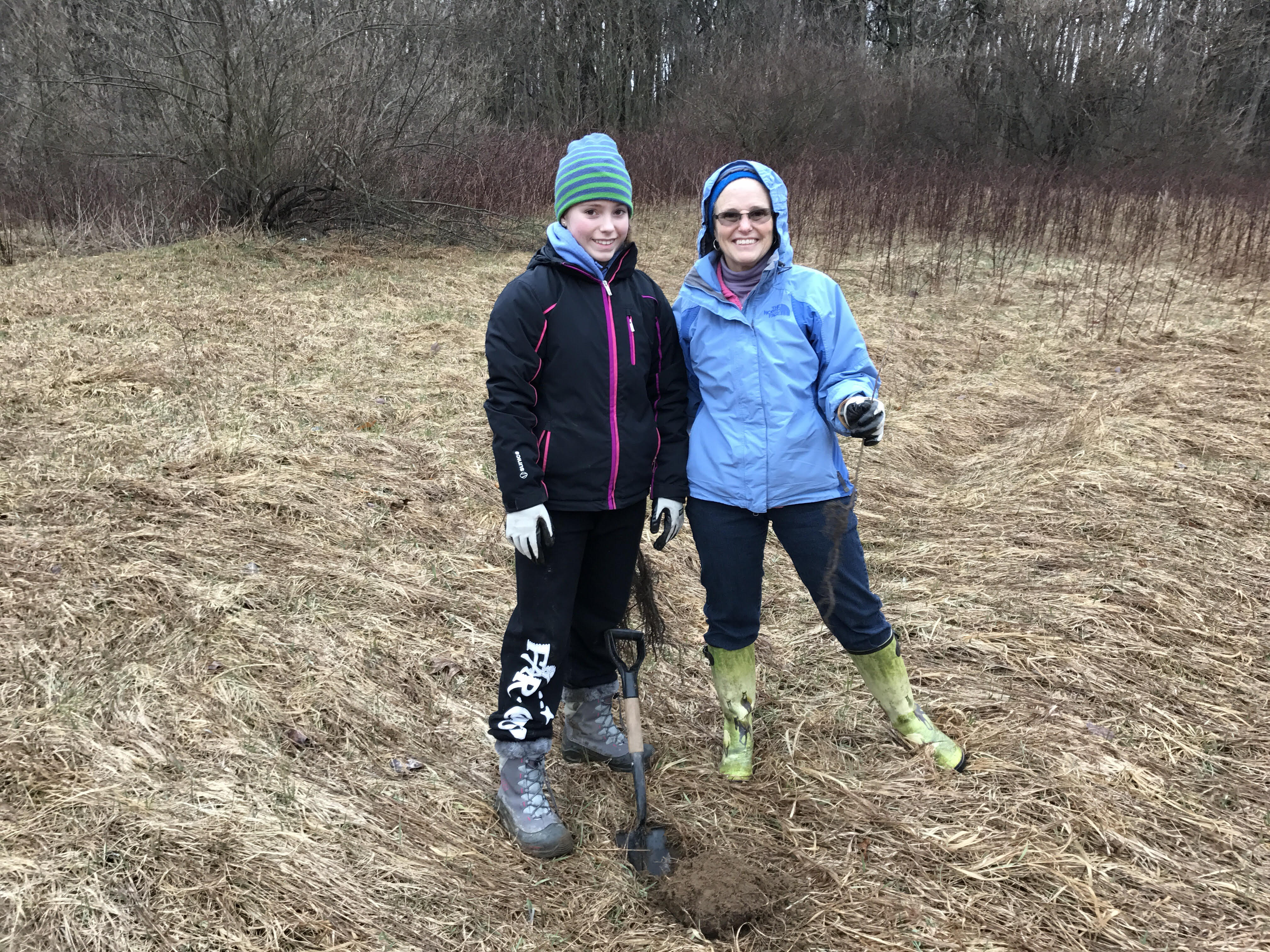 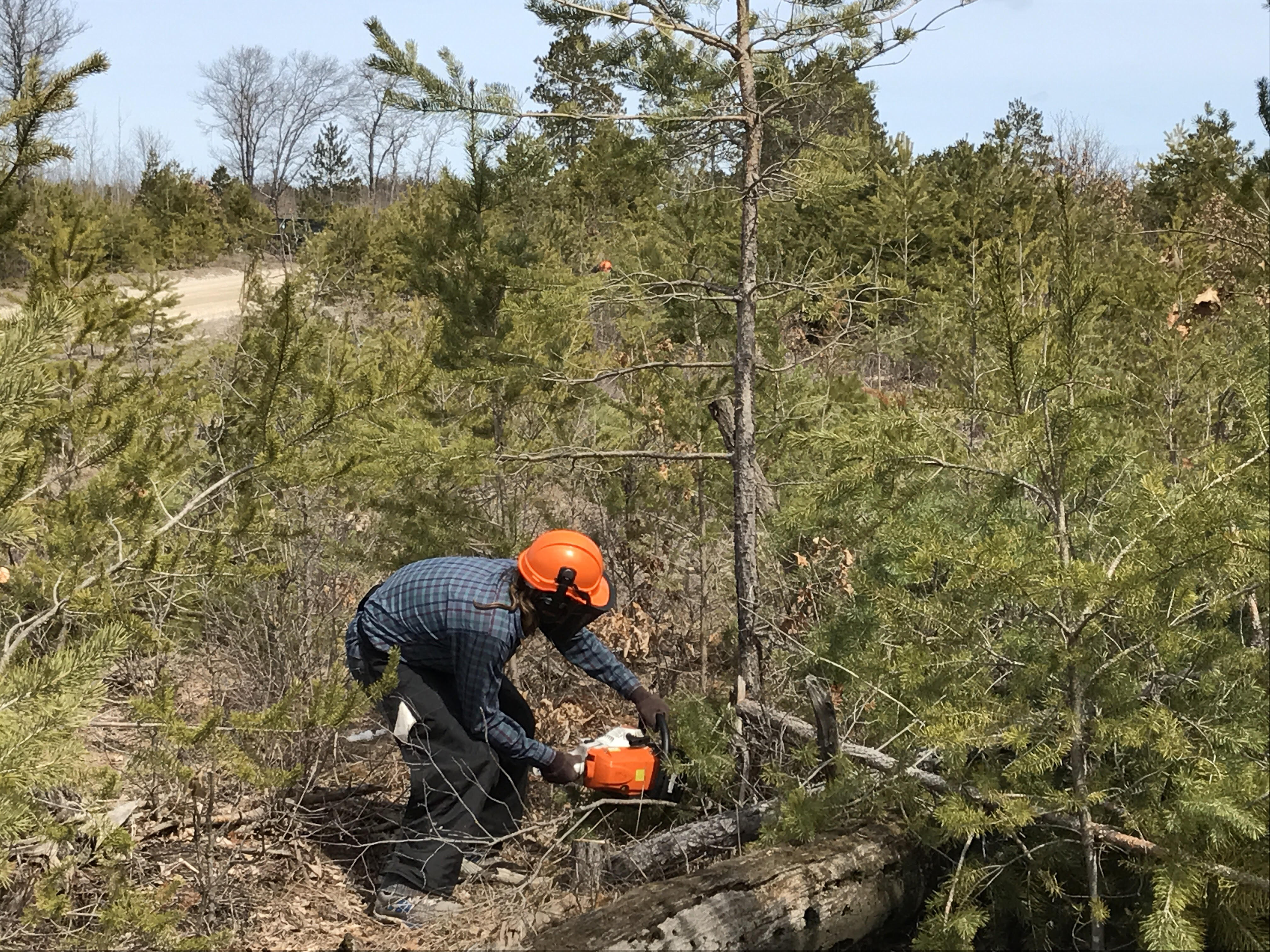 Last week Wednesday, on March 29th, a group of 9 volunteers along with Huron Pines AmeriCorps member Jason LaPointe removed Scotch pine from 8 acres of a Jack Pine plantation in the Atlanta State Forest. Many volunteers were local to the area including several representatives from the Montmorency County Conservation District- Tom and Elaine Carlson, as well as the Montmorency County Conservation Club- Bill Houston, Bob Discher, George LeBlanc, and the Aplena Conservation District- Brook Alloway, among MUCC volunteers Mike Radke and Peter Thompson. This project was coordinated with Jason as well as the Atlanta DNR Unit Manager, Cody Stevens. 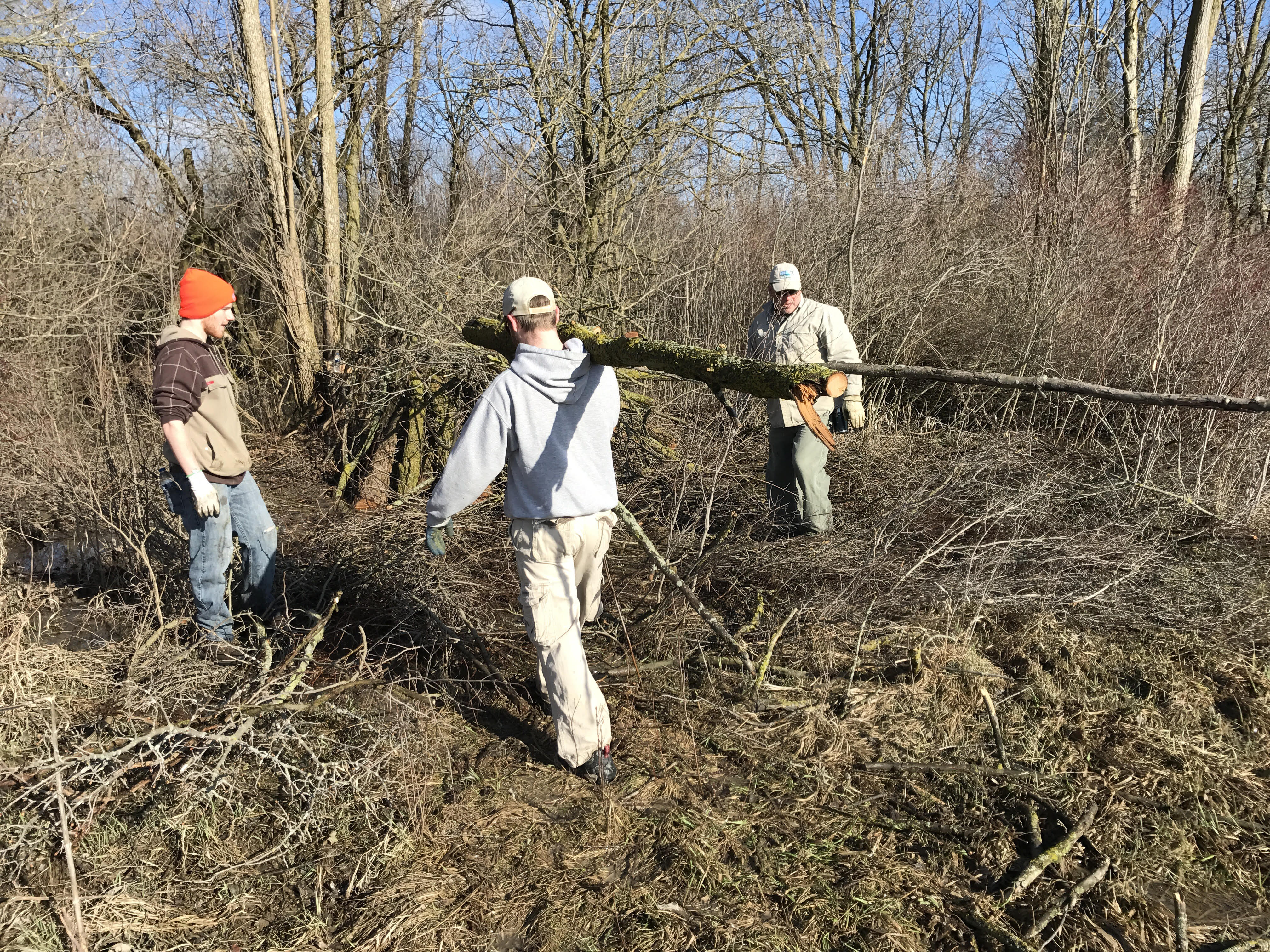 This past weekend on Saturday, April 1st, a group of 8 volunteers built 12 new brush piles to provide cover for the areas rabbits in the Chesterfield Mini State Game Area. This hunting area is only 160 acres and is surrounded by urban area. Although it is not highly known of, it does get used for waterfowl hunting as well as small game hunting and light deer hunting. The areas DNR Wildlife Biologist, Terry McFadden, and DNR Wildlife Technician, John Darling, emphasized the importance of this program helping them to create “quality habitat where quantity is lacking” in the area. Most volunteers were local to the area, including George Fenlin- who dedicated much of his time in the 2015 season, Michael Bono, fellow MUCC Staff member Shaun McKeon and his brother, Patrick McKeon. Volunteer Stephen Powell traveled from 45 minutes away to volunteer; Steve also had attended MUCC’s Chainsaw Safety Training Course this January. 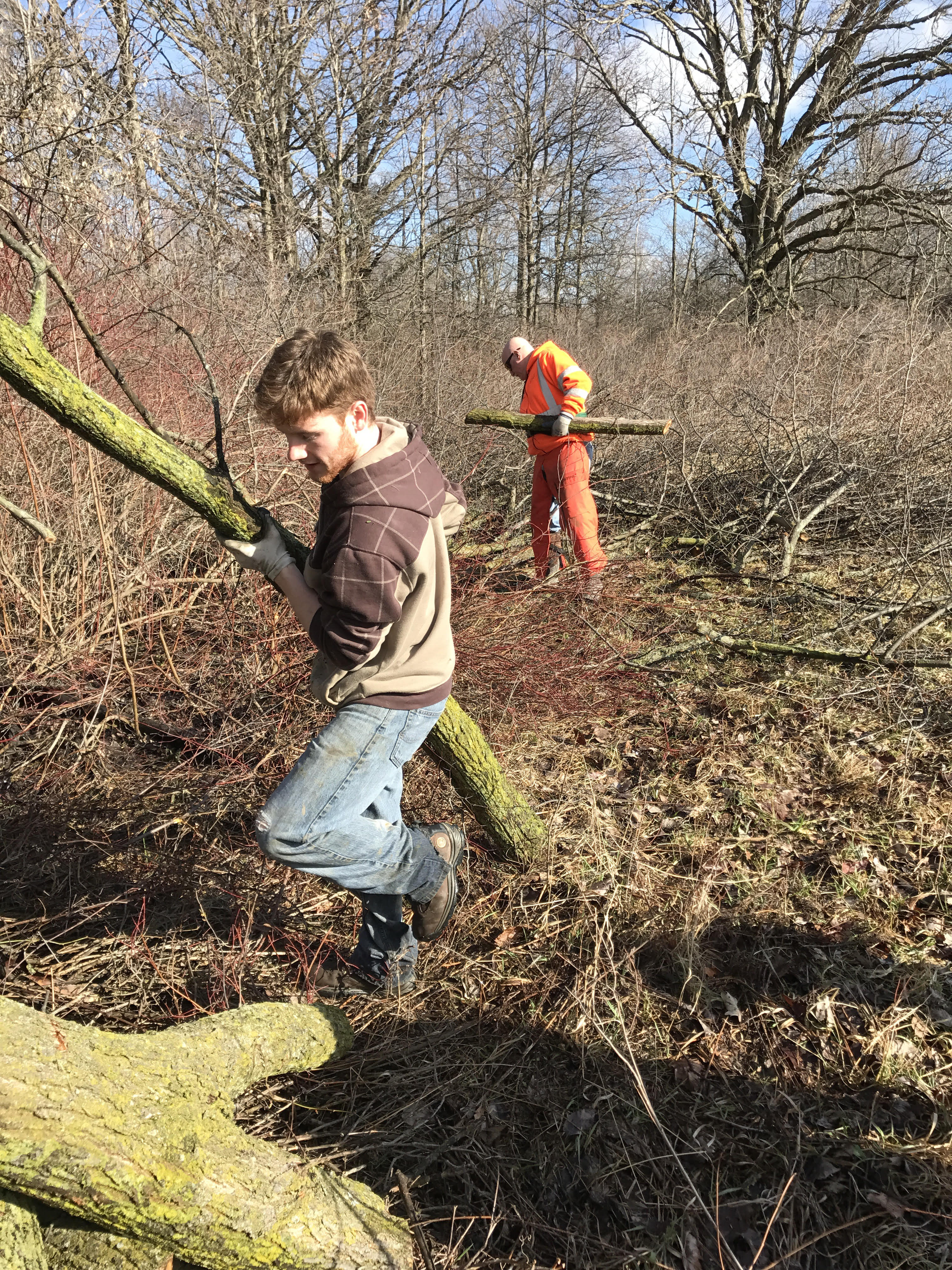 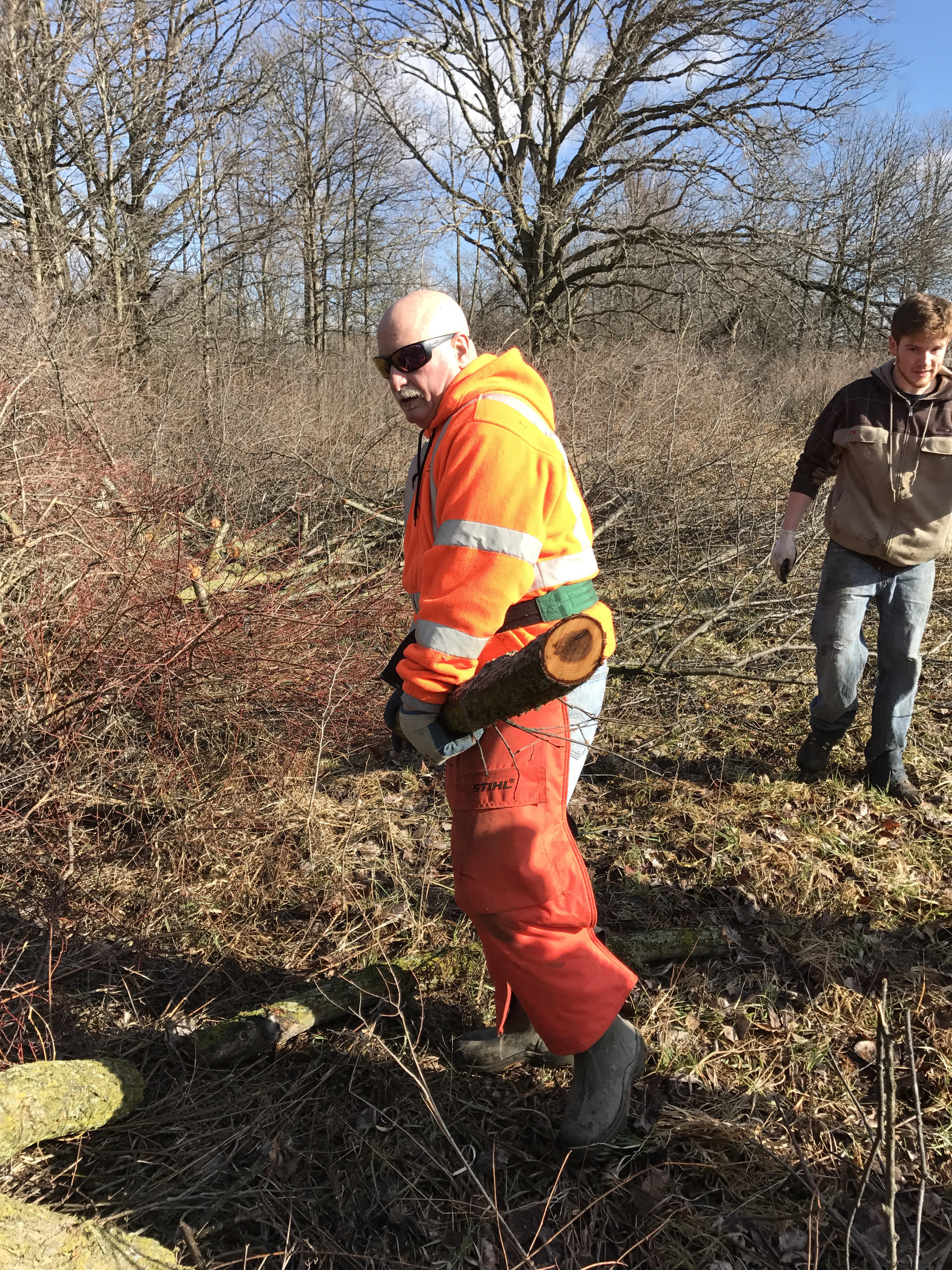 There will be several more volunteer opportunities to improve wildlife habitat on public land throughout the state this month. Next week on Thursday, April 13th, we will be partnering with the Reese High School Out-of-Doors Club to maintain wood duck nesting boxes in the Fish Pointe Wildlife Area. On Saturday, April 15th, we will be re-visiting a site in the Gourdneck SGA to plant trees for thermal cover as Brandon Thomas’s Eagle Scout project. On Wednesday, April 19th, we will be partnering with the Grand Traverse Academy 5th & 6th grade to plant trees in the Petobego SGA. Then, on Saturday, April 22nd, we will be planting trees in the Crane Pond SGA. Look for an event near you and please RSVP to volunteer for wildlife!

We will be teaming up with the Reese High School Out-of-Doors Club to maintain wood duck boxes in the area.

Partnering with Brandon Thomas from Boy Scout Troop 253 out of Vicksburg, MI to complete his Eagle Scout project, we will be planting trees to provide thermal cover for deer and small game in a wildlife opening.

We will be planting mast-producing trees and shrubs in the area to provide browse for wildlife and also will be building brush piles for rabbitat.

We will be pruning apple trees in a large orchard withing the Grayling State Forest.