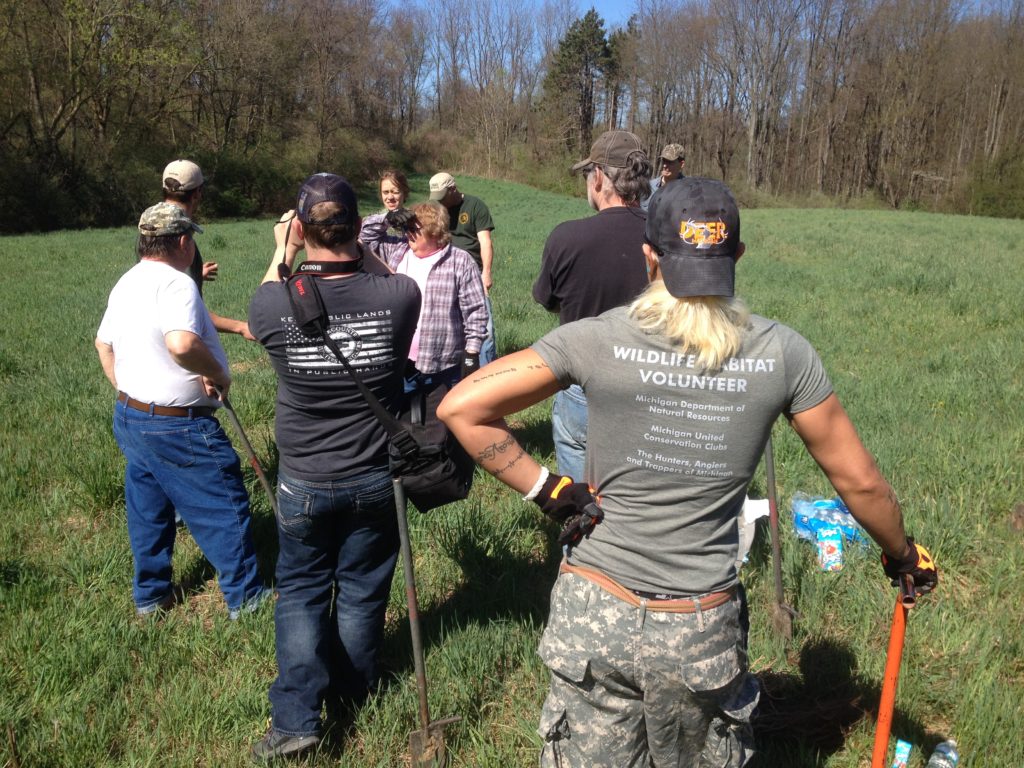 Volunteers with MUCC’s wildlife habitat program complete projects on Michigan’s public land year-round; but the busier season of projects has begun! Last week a total of one thousand trees and shrubs were planted by volunteers between two projects in the Tuscola State Game Area and the Crane Pond State Game Area. A total of 24 students with the Reese High School Out-of-Doors Club took a day off from school to plant 500 trees in a wildlife opening in the Tuscola SGA on Friday; what a great way to participate on Earth Day. Then on Saturday, 10 volunteers planted another 500 trees in two different locations of the Crane Pond SGA. 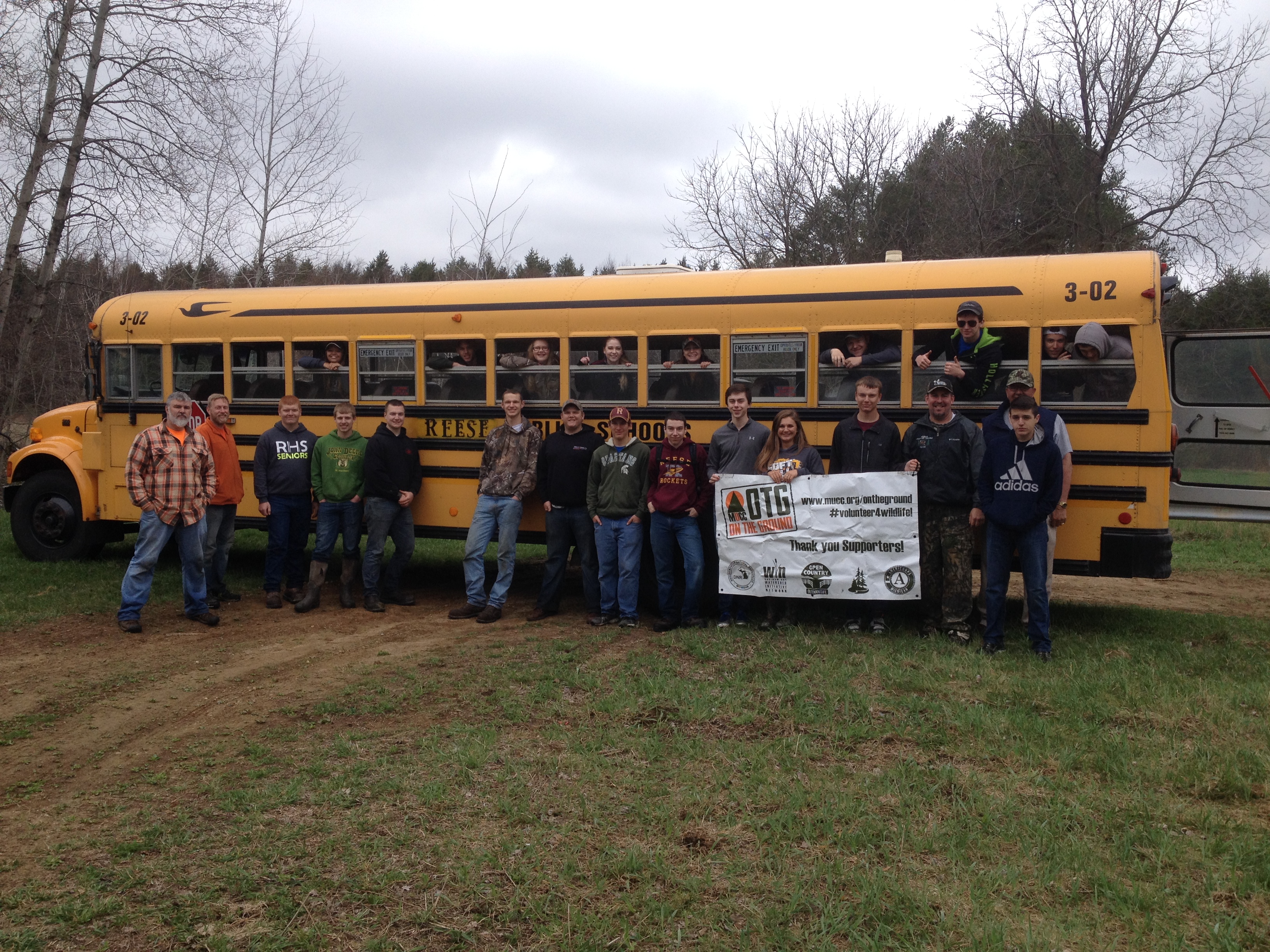 The Reese Out-of-Doors Club is currently going on its twentieth year; incredible! The club offers multiple opportunities for students to get involved in all aspects of the outdoors. Older students will take younger students fishing for their first time, or learn how to hunt a certain species, or identify plants and animals, learn about soils, biology and ecology in the field, and they send a few lucky kids to MUCC’s Youth Camp each summer. This group of students was led by Brian TerBush, Nick Seney, Matt Lefler, and Bill Frost for the day. The group started their morning by cleaning up a section of their adopted highway before attending the habitat project at the Tuscola SGA and since they were hard workers, they got all 500 conifer trees planted in just two hours. They then chose to clean up other parking areas of the Tuscola SGA rather than going back to classes; great choice! 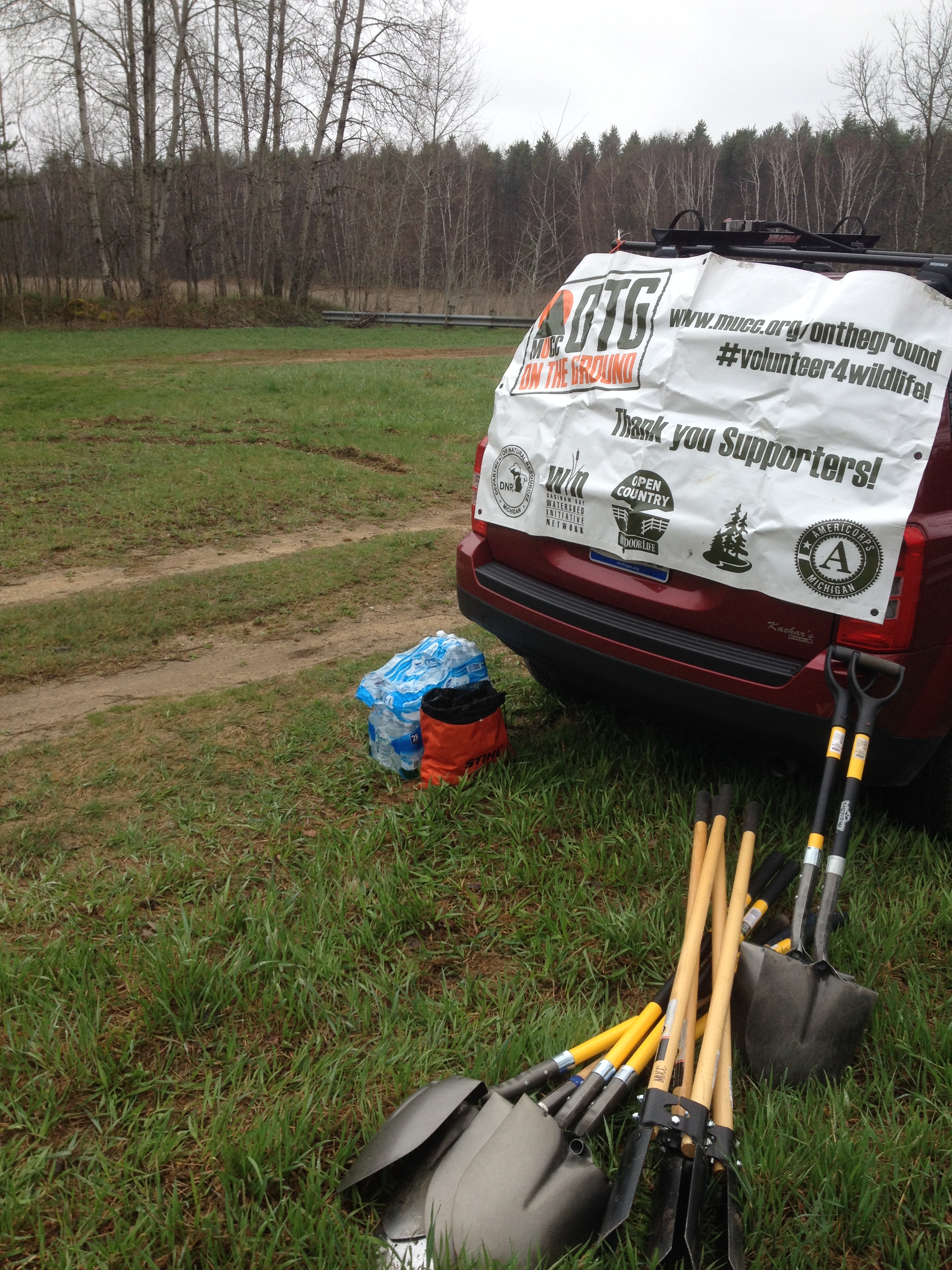 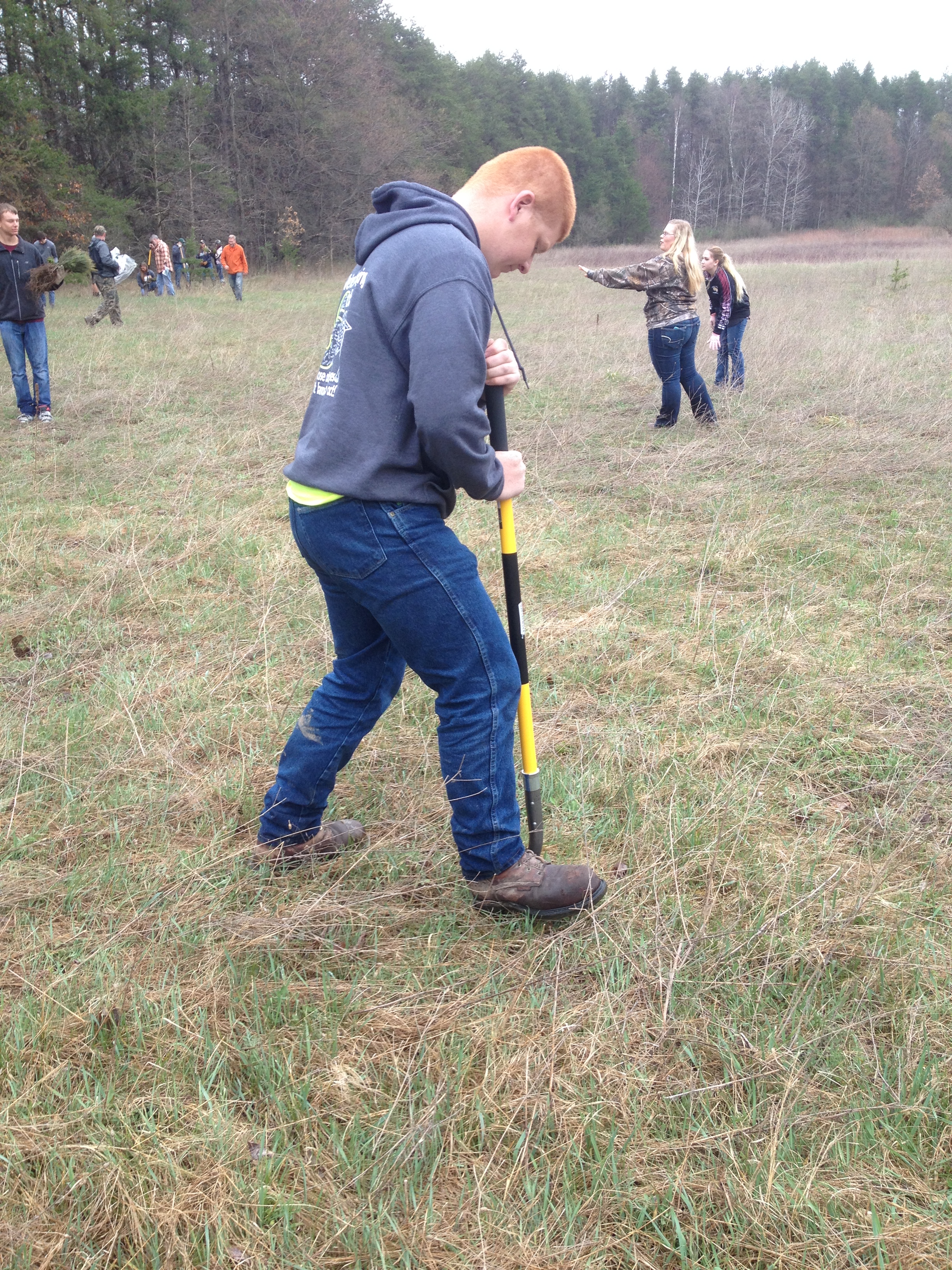 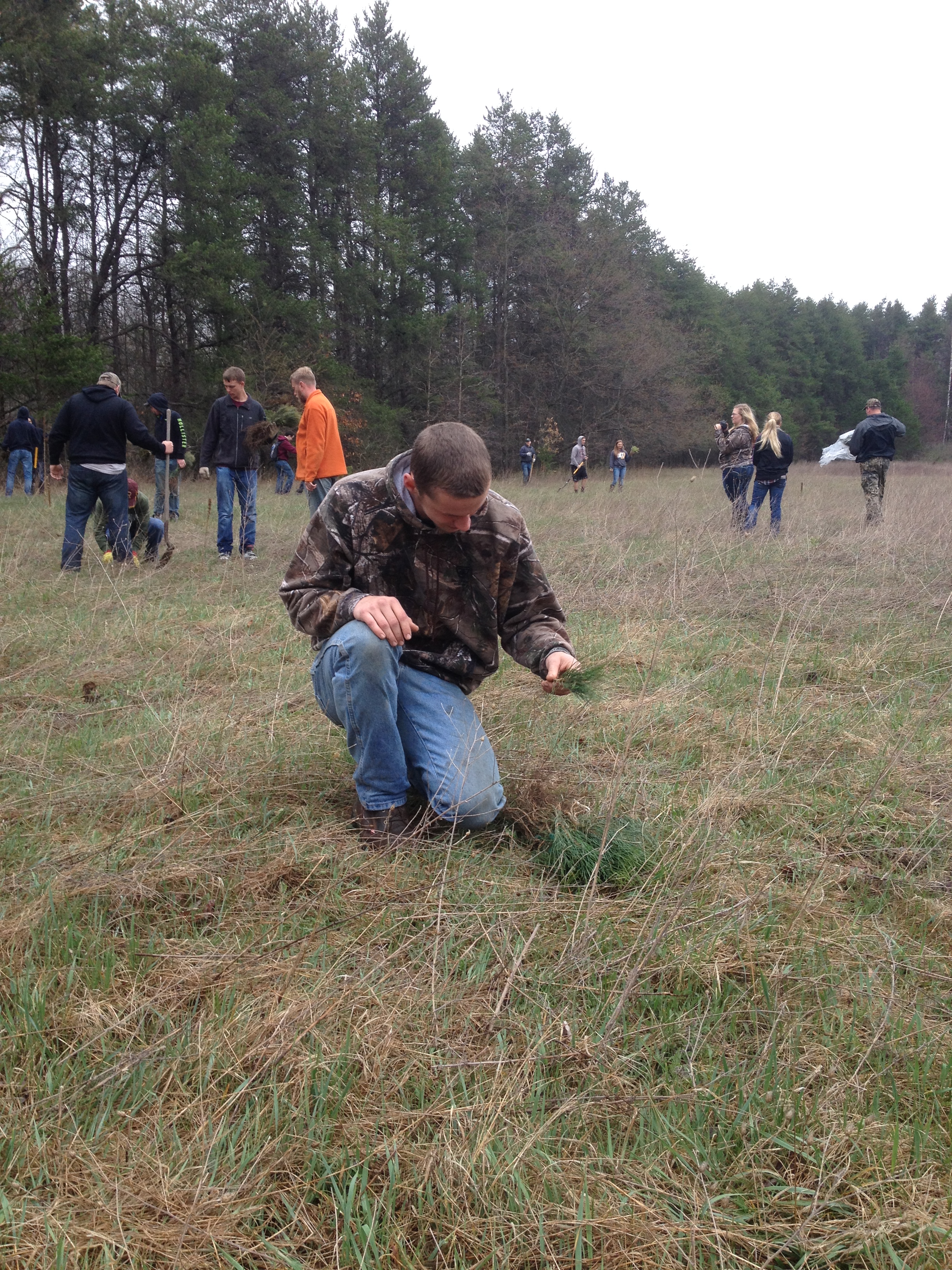 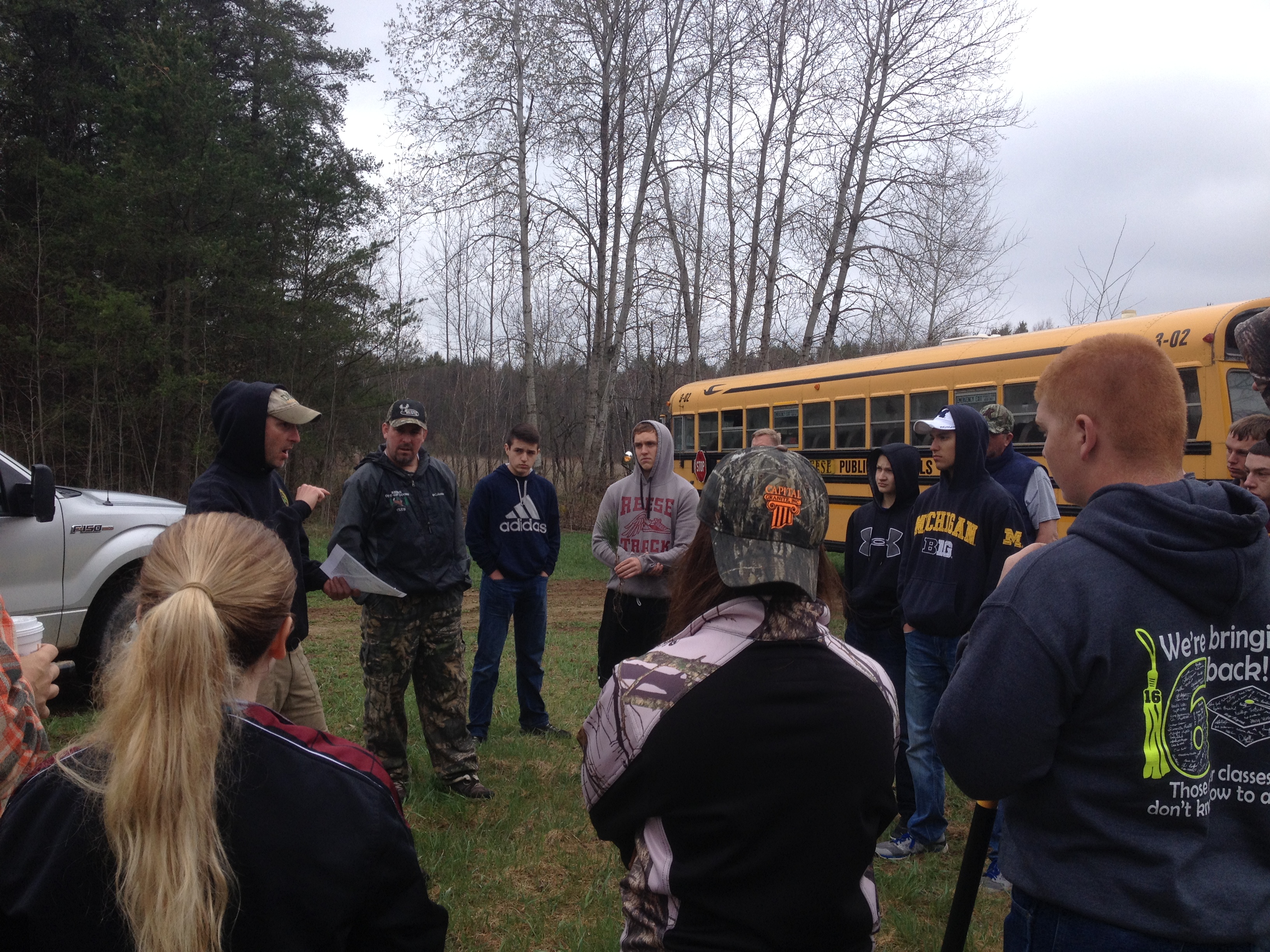 The trees for this project were provided by the National Wildlife Federation; thank you NWF! They were all conifer trees native to the area. Volunteers planted two rows of 50 red pines, two rows of 50 white pines, and six rows of 50 white spruce trees. The planted trees covered about 75% of the wildlife opening and left a portion of field open. The area’s DNR Wildlife Biologist, Don Bonnette, explained to the group what benefits this habitat work will have for wildlife in the area. Don also spent some time talking about wildlife disease management and other aspects of his job, as he left the event early to pick up a deer that had died in a private landowners pond after they observed it drinking the water there a few mornings in a row. 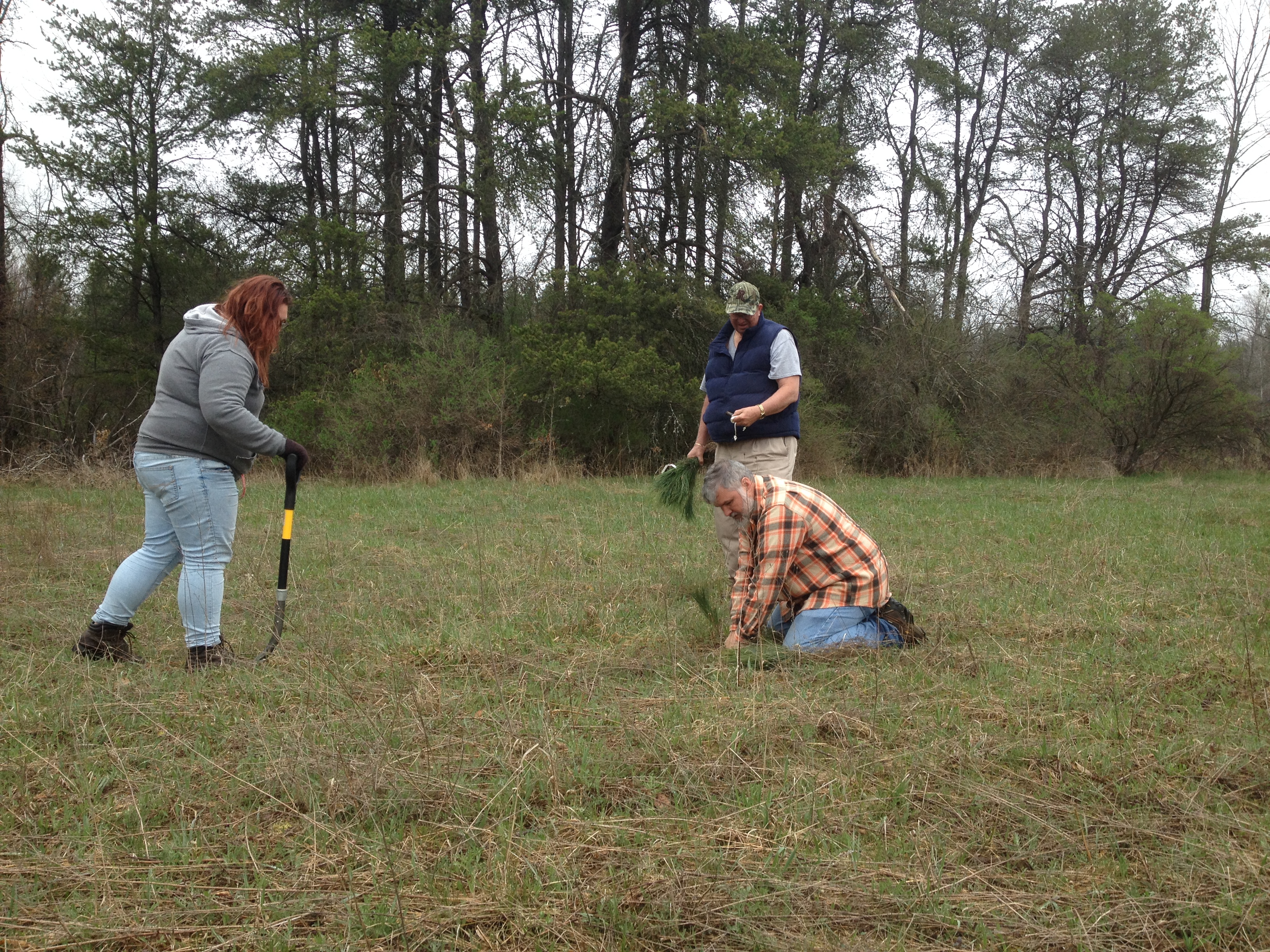 Returning volunteer Melanie Ross joined us for the habitat project as she was on her way from Saginaw Valley State University to her home in Royal Oak; thanks for going out of the way to join us and take a study break! Melanie and her dad helped to build brush piles for rabbitat at the Gratiot-Saginaw SGA last spring. One of the club organizers, Matt Lefler, showed up to the event wearing full camouflage attire. After the group got to work planting trees, I asked him if he’d been out turkey hunting that morning. It turns out he took his nephew, Vince Martinez, turkey hunting for the first time that morning and he got his first bird; congratulations Vince! 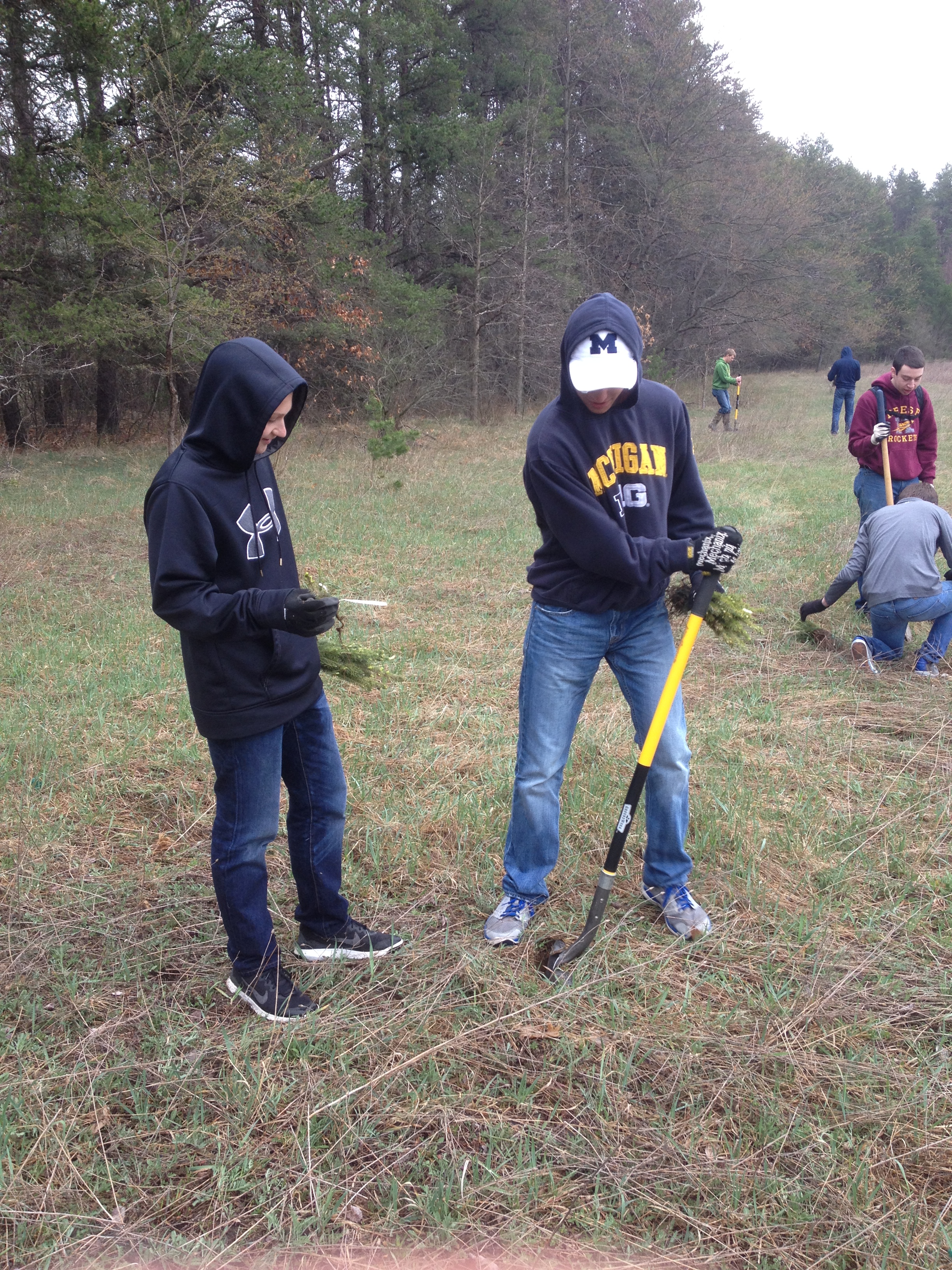 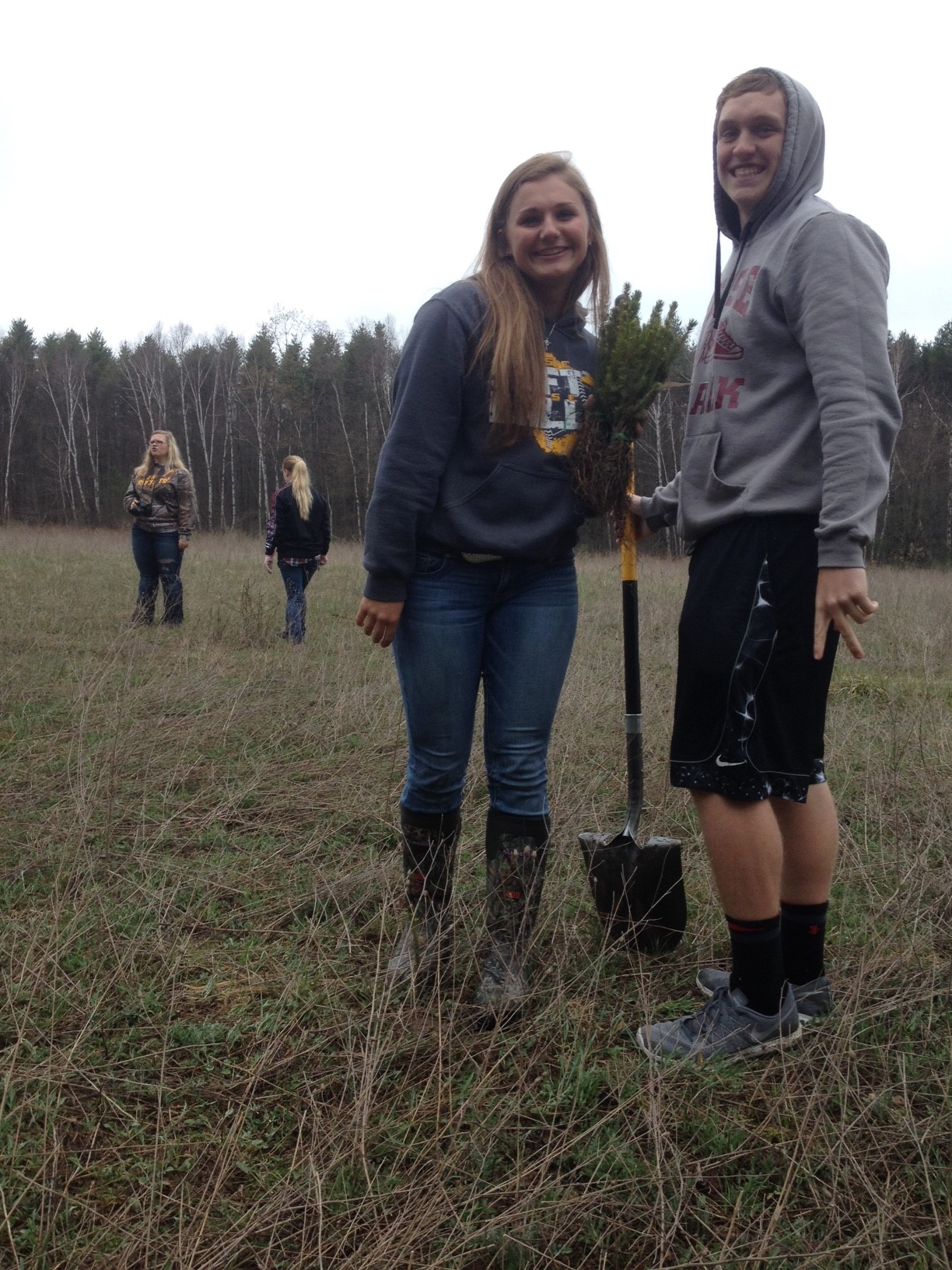 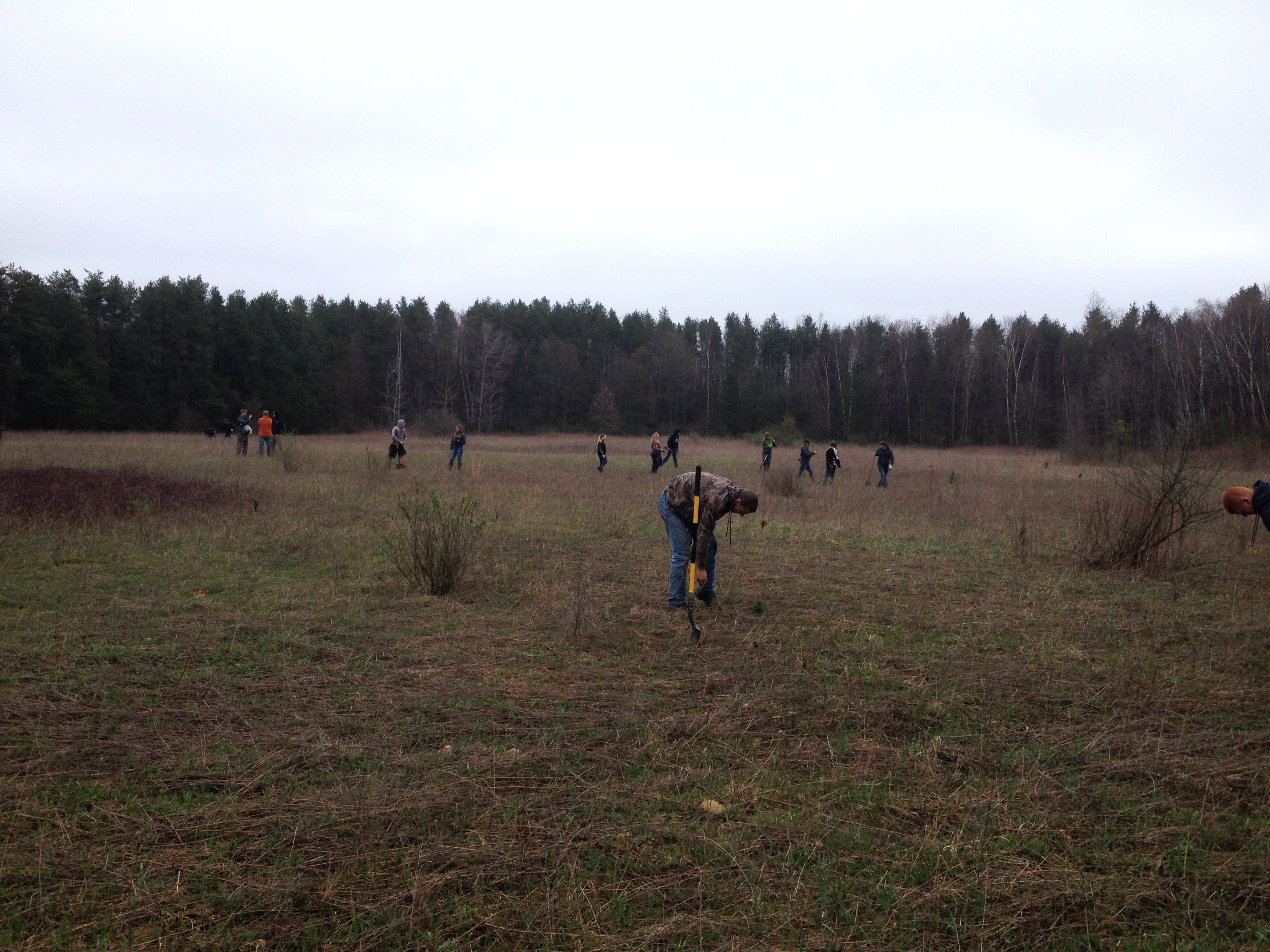 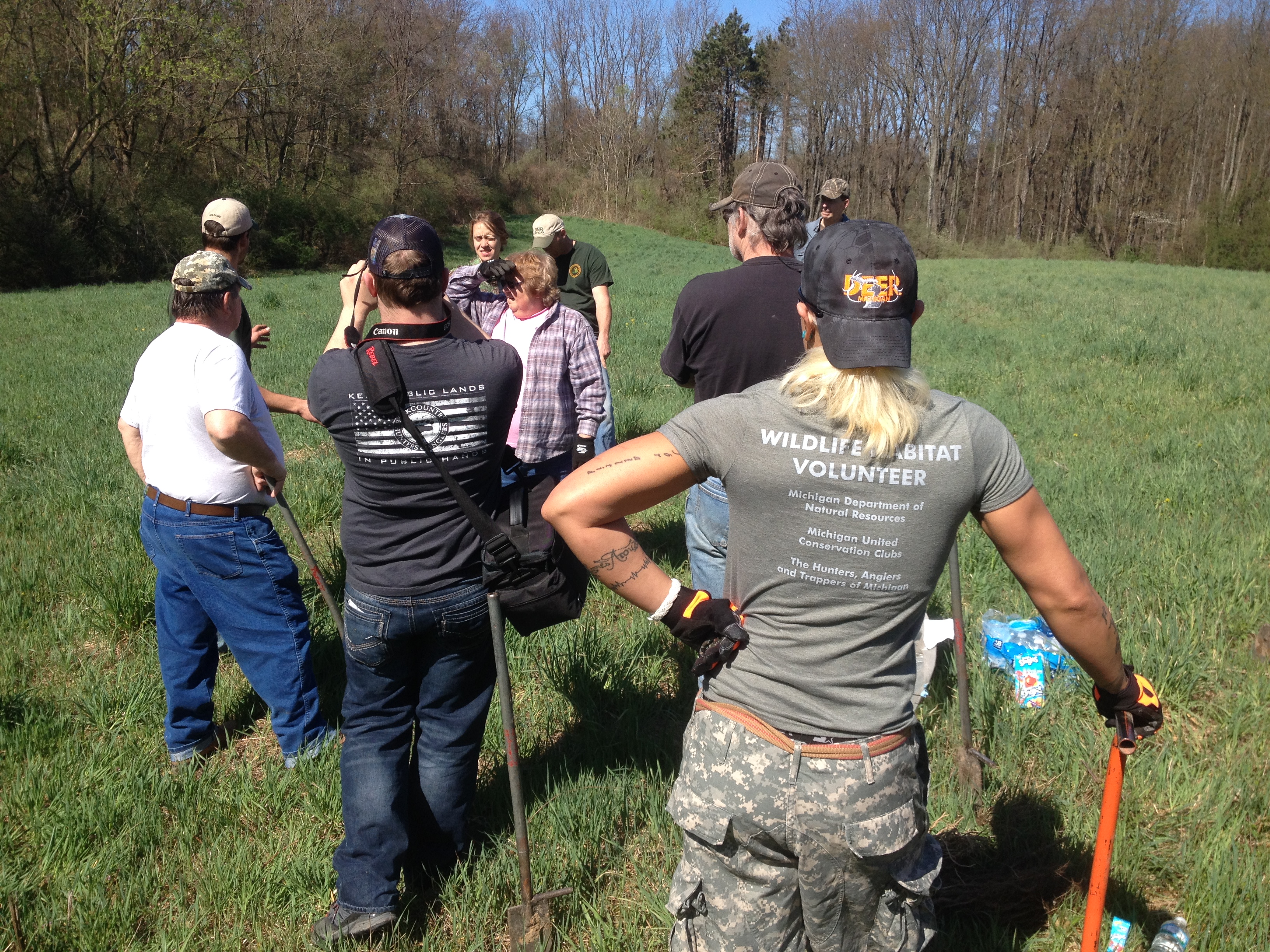 On Saturday I was headed to the Crane Pond State Game Area with my copilot and super-volunteer, Bethy Williams, to plant more trees! This planting for this project was planned by DNR Wildlife Technician Nate DeVries. DNR Wildlife Assistant Dean Boerman joined us for the day with his son Austin as well. Nates girlfriend, Carolyn, and dad, Kevin DeVries volunteered with them. Charles and Diane Konneck represented from the Cass County Conservation Club to volunteer since they’ve lived next to the area almost all of their lives. Relentless rabbit hunter and volunteer Steve Waksmundzki and his girlfriend, Lynda Marcusse, helped out tremendously. Lynda cooked sloppy joes for all of the volunteers for lunch and she planted trees; it was delicious and much appreciated! Neil Summers drove up to the event from Indiana to get some footage and photos for a conservation documentary he is working on; more details to come!  Thank you, Neil, for capturing these great volunteer moments! 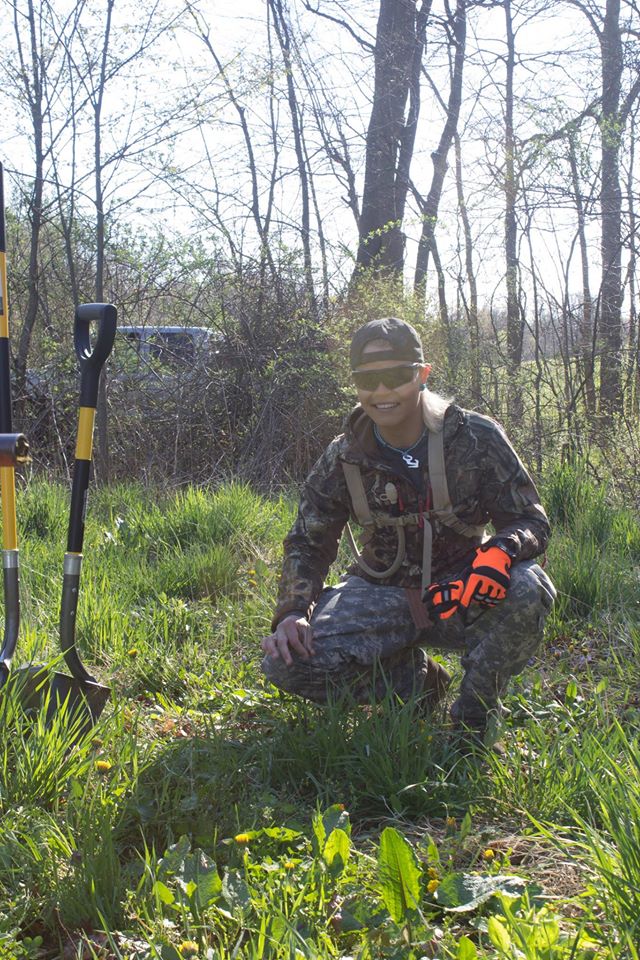 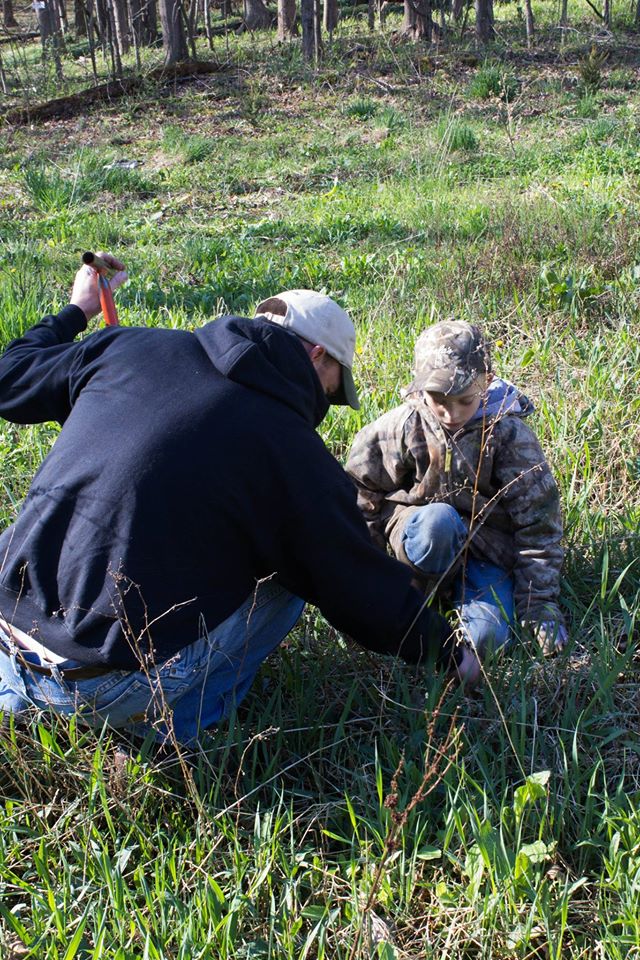 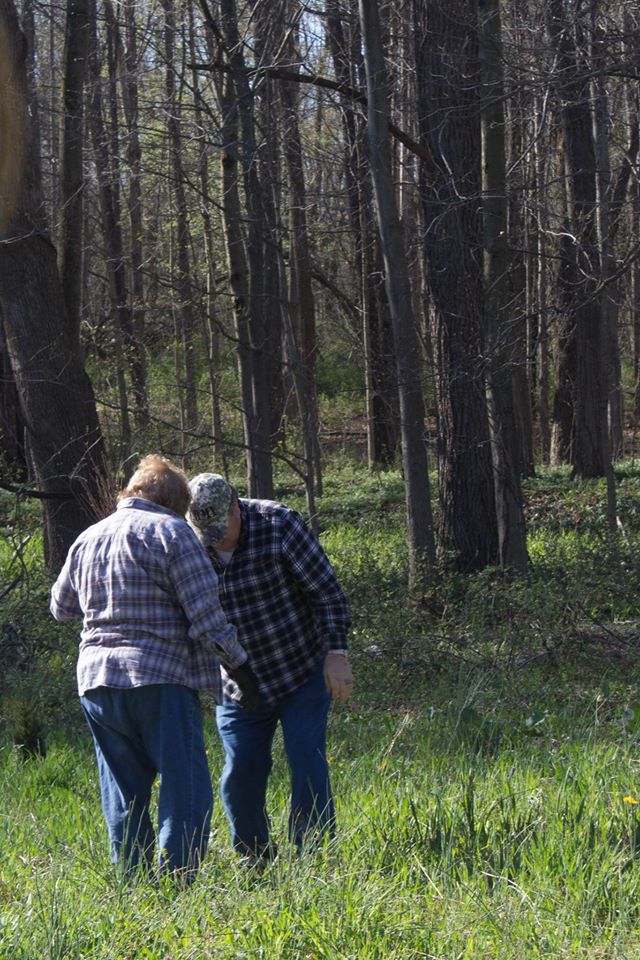 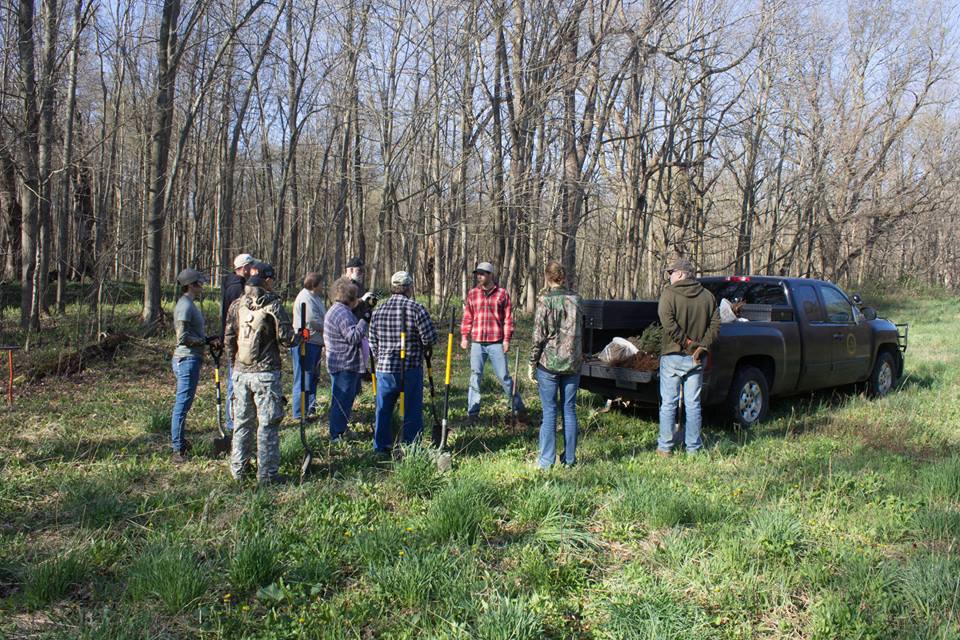 These two events were perfect examples of how the hunter-conservationist cycle works. In fact, there was a turkey hunter that joined us on Saturday as we all rallied up at the field office. Ron Bumgardner had a successful turkey hunt just before volunteers started arriving at the location. He was hunting near the field office and had just returned as Dean was preparing the garage space for lunch later on. As any ethical hunter would, he took interest in the habitat project and chose to help out for the day. Ron was once a wildlife biologist for the Crane Pond State Game Area as well! This perfect balance of hunting wild game species and giving back to the public land you hunt is the key to managing wildlife and their habitat. There are two more opportunities coming up on May 14th 2016 in the Pigeon river Country State Forest and on May 15th 2016 in the Muskegon State Game Area- see more details by clicking on the highlighted date and RSVP to volunteer! 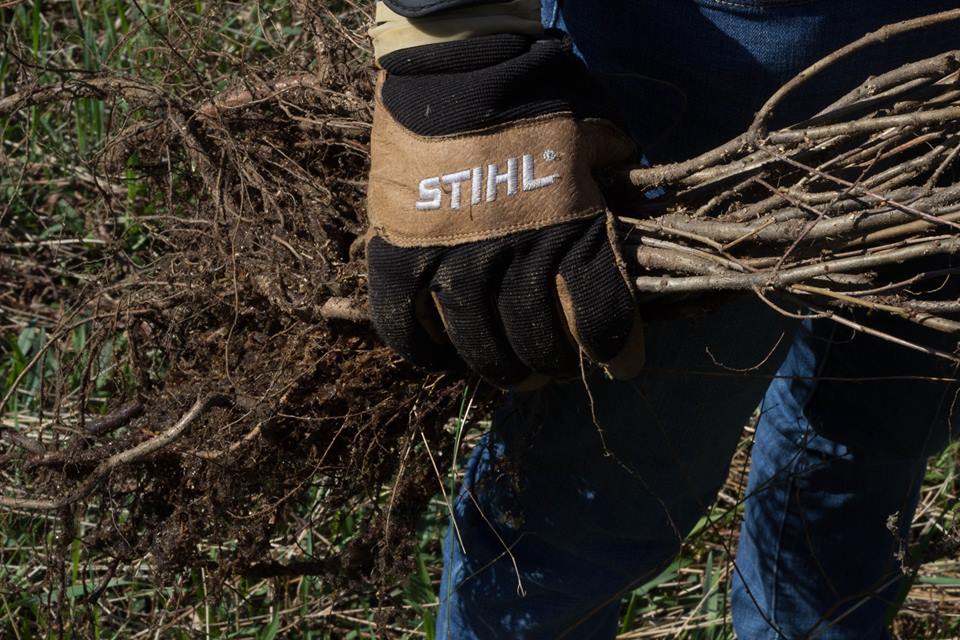