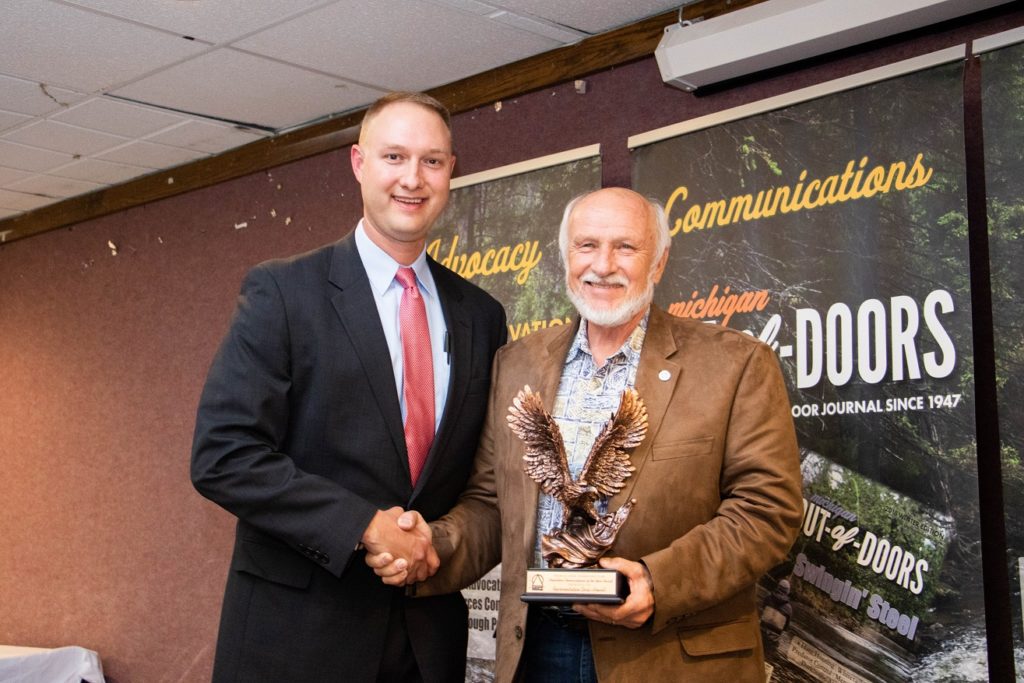 The Wildlife Conservationist of the Year Award was given to Robert Doepker for his outstanding work of 39 years as a wildlife biologist with the Michigan DNR Wildlife Division. Bob’s dedication to basing wildlife management on sound science has resulted in dozens of published papers bearing his name. Bob also helped to create extensive databases aiding managers’ understanding of wildlife occupancies with different forest types.

The Unsung Hero Award was granted to Frank Krist for his work of protecting our natural resources, including our world class sport fisheries. Frank serves on multiple boards such as Hammond Bay Area Anglers Association, Lake Huron Citizens Advisory Committee and Conservation Coalition which help to give public input concurrent with MUCC beliefs.

The Ben East Award was given to John Ozoga for sharing his work as a researcher and biologist on white-tailed deer in Michigan. John has published dozens of peer-reviewed articles, publications and scientific journals. His ability to convey the complex study of deer behavior and research in a way that is understandable to the average deer hunter is why he has been proudly awarded the Ben East Award.

The Corporate Conservationist of the Year Award was proudly given to Rob Miller and Miller Electric for his contribution to our Michigan Out-of-Doors Youth Camp in Chelsea, Michigan. Rob’s company, Miller Electric, has helped to construct bunk beds and wire the electricity of camp providing a total donation of well over $15,000 dollars. Miller Electric has also helped patch roads and regrade the beach down at the youth camp.

The Special Conservationist Award has been granted to Stuart Kenewell for his service with the Chelsea Rod and Gun Club, along with his dedication to the Michigan’s hunter safety program. Stu has instructed over 3,000 young hunters and has even inspired new hunter safety instructors, which are important to keep the program going.

The Affiliate Club of the Year Award has been given to the Lake St. Clair Walleye Association for its dedication to protection, preserving and promoting the walleye fishing in Michigan through conserving and enhancing opportunities for all. Their contributions to MUCC are numerous, including funding kids to attend our youth camp and giving a donation of about $6,000 to help fund needed facility work at Cedar Lake Outdoor Center, the site for Michigan Out-of-Doors Youth Camp.

The Educator of the Year Award was given to Jon Gray for connecting conservation to education in regards to our youth. Jon is active in the Michigan Alliance for Outdoor and Environmental Education helping to teach other teachers about connecting kids to the outdoors. Jon is also on the president of the Novi Safari Club International and sits on the Education Committee which helps coordinate the Riley Wilderness Youth Camp Scholarship helping kids get to camp.

The Volunteer of the Year Award was awarded to Elden Montross Sr., Fred Tyszka, Jim Shipley, Dennis Holoway, Charlie Baker and John Dixson. These six individuals have tirelessly contributed their time to MUCC for decades helping at shows like Outdoorama and the Ultimate Fishing Show. They have a unique ability to sell memberships and raffle tickets which helps to fund our organization. Working over 10-hour days and spreading the MUCC message to thousands of people, it is no question that these individuals share our passion for conservation.

The Legislative Conservationist of the Year Award was proudly granted to State Representative Gary Howell. Rep. Howell serves as the Chair of the House Natural Resources Committee which helps to pass laws that benefit our natural resources, our organization and its members. Rep. Howell has immersed himself in issues such as the land use debate and improving hunting opportunities for young people. Rep. Howell has been known for honest debate and open communication in his committee which helps to move along legislation. MUCC is honored to have worked with Rep. Howell and looks forward to the years of great work to come.

Posted in Education, Policy
← In the Field: The Cooperative Difference2018 Annual Convention Recap →