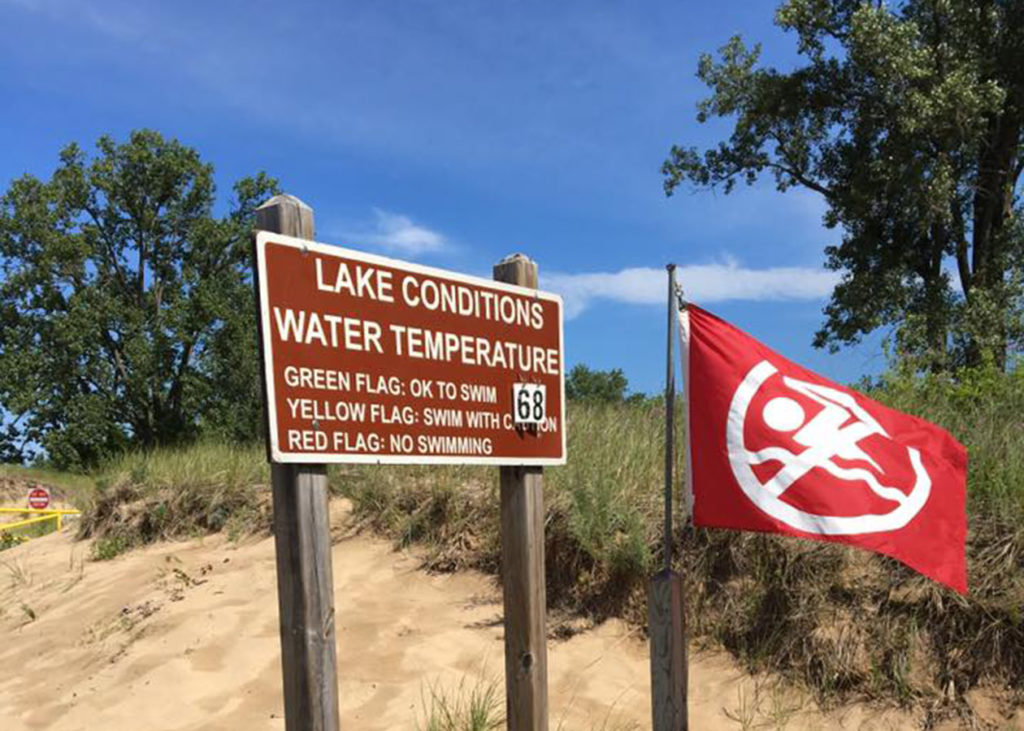 A proposed director’s order related to swimming from state-managed beaches grew in scope last week per a presentation from the Department of Natural Resources (DNR).

The order, first proposed for information at the July Natural Resources Commission (NRC) meeting, would prohibit “exit[ing] the state managed beach area for the purpose of entry into the water when entry is prohibited by signage and/or communication by a department employee or their designee” on state park and recreation area lands.

Director’s orders do not require the approval of the legislature or NRC. The NRC is the venue for public discourse. This order could be up for action during the August NRC meeting.

The memorandum accompanying the proposed order listed disregard for hazardous conditions, commonly referred to as “red flag days,” as the reason for the proposed order. However, during a Powerpoint presentation at the July NRC meeting, DNR Unit Manager Nicole Hunt noted several other reasons a beach may be closed under this order, including an ongoing rescue, when bacteria or contaminants are present and “when other issues are identified that would impact safety.”

The director’s order does not list any of the aforementioned reasons for closure in the order or accompanying documents. In 30 years, the only words left may be the actual order — not the memorandum or the DNR presentation clarifying intent, said Ian FitzGerald, Michigan United Conservation Clubs (MUCC) policy coordinator.

“Since 1937, MUCC has worked to ensure policymakers enact durable laws and rules that withstand the test of time, are clear in their intent and leave little room for interpretation,” FitzGerald said. “While the organization understands natural resources management is fluid, conservationists have to proactively and critically think about how laws will be enforced by future generations and any ambiguity that may present itself.”

FitzGerald also noted that the DNR has not provided any statistics on how many drownings this order could have prevented in past years. After reviewing Great Lakes Surf Rescue Project data for 2020, it appears that only a small portion of Great Lakes drownings occurred during “red flag conditions,” but it isn’t noted whether or not those drownings occurred in areas where this order would be applicable.

Lake Michigan, for example, boasts hundreds of miles of shoreline, but only a small percentage of that shoreline is within a state park or a recreation area — the only two areas this order would apply to.

Michigan’s flag system is meant to be an indicator to beachgoers about water conditions. A green flag means the conditions are safe, yellow means there is a medium hazard and red means water activity should cease and conditions are dangerous.

In 2004, international guidelines for warning flags related to swimming were developed, according to the United States Lifesaving Association (USLA).

“To be fully effective, the use of warning flags to notify the public of current hazard levels should be consistent, based on objective, measurable criteria that can be logged and tracked, and then changed as conditions change. They should be accompanied by good public education efforts to explain the meaning of the flags flown,” according to a release from USLA.

MUCC worries that having no objective standards for beach closures in law could present legal challenges and animosity in the future, FitzGerald said.

“The public deserves metrics and clear, objective language as to what conditions, specifically, would constitute closures and how it would be applied,” FitzGerald said. “While we understand and appreciate the DNR’s intent with this order, it uses a baseball bat where a scalpel is necessary.”

Since 1937, MUCC has worked to ensure your rights to hunt, fish, trap and recreate are not infringed upon. We do so from Lansing to Washington D.C. Join us here: http://bit.ly/JoinMUCC.