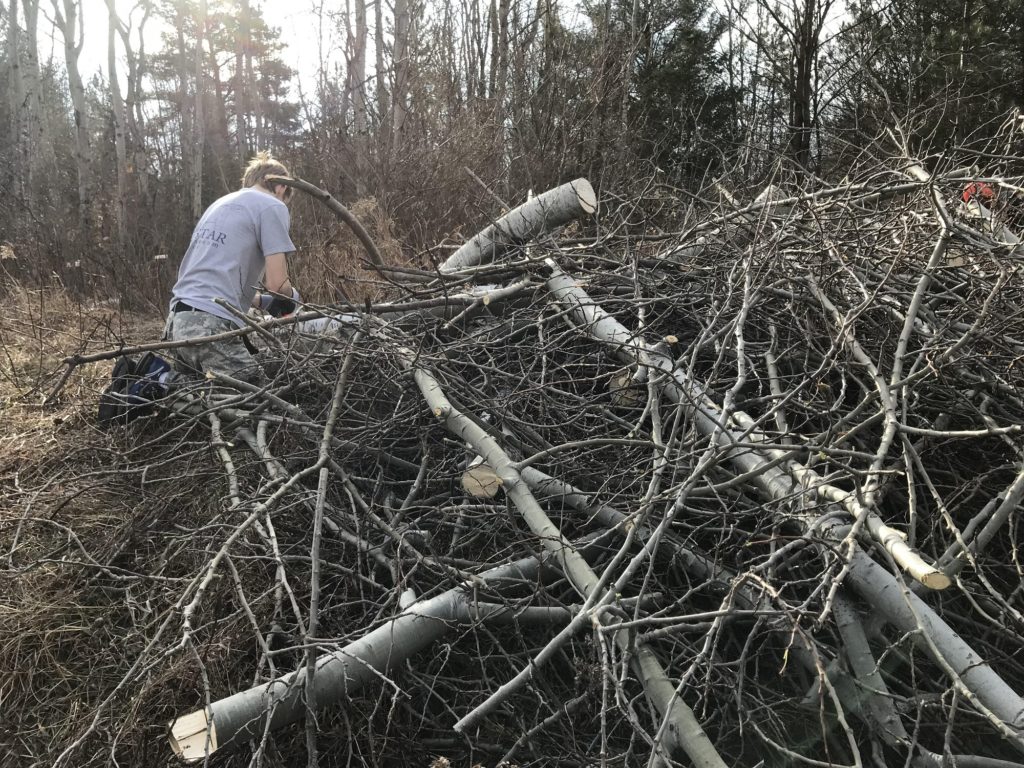 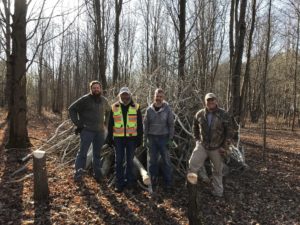 Last weekend, a group of 19 volunteers started On the Ground’s sixth season with a very productive day improving wildlife habitat in the Allegan State Game Area’s Fennville Farm Unit. The day was spent cutting mature aspen trees in selected areas to promote regeneration of new aspen saplings along with other forbes and vegetation by allowing more sunlight to hit the undergrowth. The cut trees were then used to build six large brush piles in the area for rabbitat. For the past five years, this has been an ongoing effort in the area with locations chosen by the areas DNR Wildlife Technician, Mike Richardson. Volunteers included students from Grand Valley State University’s Wildlife Society, Boy Scouts from Troop 147, MUCC members, and residents local to the area wanting to give back to the community. 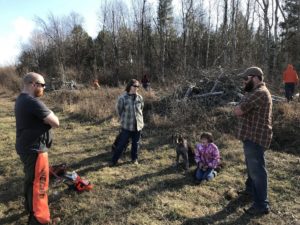 Several volunteers in the group had previously attended other OTG projects including Bill and Denise Dawson representing the Heavy Equipment Response Coalition, Kelvin and Levi Bross representing the Hamilton Rod & Gun Club and Boy Scout Troop 147, Paul Keenlance and Cory Highway both representing the GVSU Wildlife Society, as well as volunteers Jim Blough, Ben Giese, Rex Milliron, John Keith and his kids-Charlie and Amanda. New volunteers heard about the event from social media or email and wanted to join in on the efforts to improve wildlife habitat in the area as well. While each of these volunteers has a different background in regards to hunting and public land recreation, they all collaborated towards one goal of wildlife conservation. 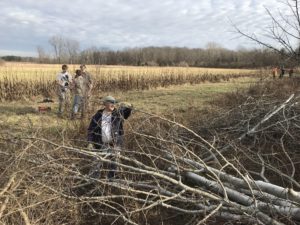 The aspen regeneration projects completed each year with MUCC’s OTG program have been producing great results with thick aspen saplings growing or forbes in some locations. The selected areas are small pockets within mature aspen stands in the Fennville Farm Unit, about a half-acre in size or less for each opening being created. These areas will provide improved habitat for a variety of wildlife species including whitetail deer, turkey, grouse, and rabbits. They will provide areas with both cover and browse for wildlife in various locations through mature forest stands.

There will be another 20-25 On the Ground wildlife habitat improvement projects scheduled this year throughout the state. You can view the updated event schedule and RSVP to volunteer at an event near you at www.mucc.org/on-the-ground! Contact MUCC’s Wildlife Volunteer Coordinator, Sarah Topp, at stopp@mucc.org or (517)-346-6493 with any questions. 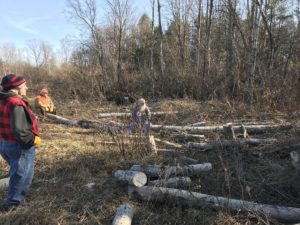