from the Michigan Department of Natural Resources
Doug Reeves remembers his first time as though it were yesterday.
“The first thing I ever caught was an ermine, a white weasel,” said Reeves, assistant chief of the Department Natural Resources’ Wildlife Division and a lifelong trapper. “I sold it for 50 cents to a traveling fur buyer. To me that was big time.”
He was 9 years old. And he was hooked. The next year he got three traps and starting chasing muskrats. He progressed from there.
“Back then you had to be 12 years old to trap beaver,” he said. “The first one I got I brought home in the basket of my sister’s fat-tire bike.”
Now, 50 years later, Reeves is still trapping – muskrats, raccoons, coyotes, fox – just about everything.
“You have to learn a lot,” Reeves said. “The learning curve is very steep. The element of exploration and discovery is a lot of fun. It’s a blast. I just love it.”
Reeves isn’t alone. In Michigan, trapping is growing in popularity. 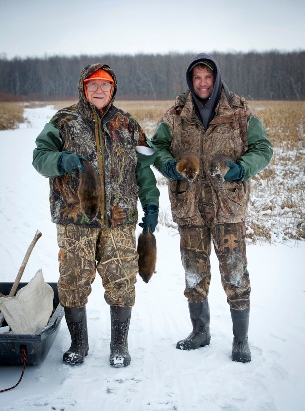 According to DNR records, just more than 10,000 people bought a fur harvester license in 1994. Two decades later, that number has tripled.
“It’s been increasing,” said Adam Bump, the DNR’s furbearer specialist. “Some of it may be because of pelt prices. When you have generally increasing pelt prices, you have an increase in trapping and the last three or four years the pelt prices for muskrats have been near or at record highs. But price for every species varies on its own, so just because ’rat prices are up, that doesn’t mean they all are.”
Indeed, it’s not all about fur prices, said Dale Hendershot, president of the 1,200-member Michigan Trappers and Predator Callers Association, one of three fur-taker associations in the state. A 64-year-old retired diesel mechanic from Gladwin who’s been trapping since he was 14, Hendershot said “the vast majority of trappers are not professionals.”
Most trappers are hobbyists, Hendershot said, recreationalists who “can probably make enough money to pay for their gasoline.”
Hendershot said it’s the challenge that intrigues trappers. “You really have to know the habits of the animals to get them,” he said.
“Trapping is not for the faint of heart,” he added. “If you’re hunting and it’s below zero and the wind’s blowing, you have an option – you can say ‘I’m going to stay in the cabin today.’ But if you have traps out there, you have to get out there in that stuff and check them. It’s a huge commitment.”
The Michigan Trappers and Predator Callers Association – formerly the Michigan Trappers Association – holds fur sales for its members and offers a landowner assistance program to connect folks who have issues with furbearers causing problems.
“Typically it’s either beaver- or coyote- related, but everybody’s got a problem with raccoons,” Hendershot said.
The association also helps the DNR with its trapper education program, which has been in existence since 2009.
“Trapping is misunderstood,” Hendershot said. “We’re trying to make it better understood. We do a lot of educational stuff. I would hope that the educational movement is paying off.”
Just like hunting and fishing, trapping is highly regulated by the DNR. There are prescribed seasons for all 17 of the species that fur-takers can harvest, and the means and methods of capture are regulated as well.
“We tend to set seasons when the pelts are most valuable,” Bump said. “Most trapping gears up in fall and runs through the winter, though you can trap beaver and otter into spring. And weasels are open year-round.”
Dwayne Etter, a research biologist with the DNR, is a relative newcomer to trapping.
“As kids we messed around with it, but we really didn’t know what we were doing,” Etter said. “I was fortunate enough to attend trapper’s college. The Michigan trappers association and national trappers association sponsor a biologist every year for a week to go to trapper’s college. It’s a week of intensive learning – how to trap, how to put up fur, good stuff. 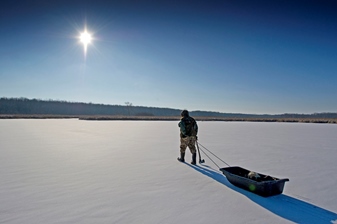 “I immediately got excited, so I got home, bought some traps, and started trapping. It’s kind of an addicting hobby – it grows and grows.”
Now Etter takes a week’s vacation every year to go the Upper Peninsula and trap.
“It’s kind of the same as deer camp – we go with the guys, hang out, cruise around the woods and we have the anticipation that we’re going to catch something.”
Trapping is also a tool for population management; when furbearer populations begin to exceed the carrying capacity, disease inevitably follows.
“Whenever raccoons get too thick, you see a distemper outbreak,” Reeves said. “When you get too many coyotes, you get mange. I’ve seen it where I live.”
To Reeves, being an ethical trapper is critical to wildlife management.
“To me, it’s important that the animal is well caught, that it’s dispatched humanely, and the fur is handled in a respectful way,” he said.
For others, the allure of trapping is reconnecting to times past.
“It’s kind of a lifestyle to some people,” Hendershot said. “It’s a throwback to when our country was settled.  And a lot of people like the feel of it.”
To learn more about trapping and fur harvesting opportunities in Michigan, visit the DNR websitewww.michigan.gov/trapping.

Posted in Uncategorized
← REACH OUTDOORS: KIDS OUT TRAPPING!CAMO AT THE CAPITOL PRIORITIES ADVANCE IN LANSING →