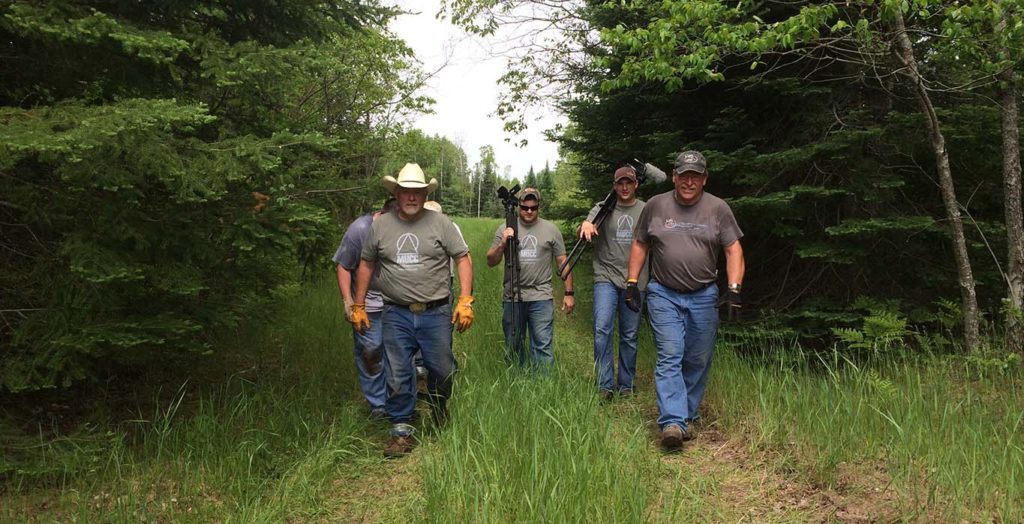 This weekend, MUCC teamed up with the Michigan Chapter of the Rocky Mountain Elk Foundation to plant trees in the Pigeon River Country State Forest. Volunteers both with MUCC and RMEF have been coordinating a habitat workday in the PRCSF for three years in a row now. The Pigeon River Country DNR provided the trees, mulch, and equipment for this project and RMEF provided volunteers from various regions of the state along with a few extra with MUCC. We were also joined by the Michigan Gone Wild crew who captured some film and a few interviews during the event. 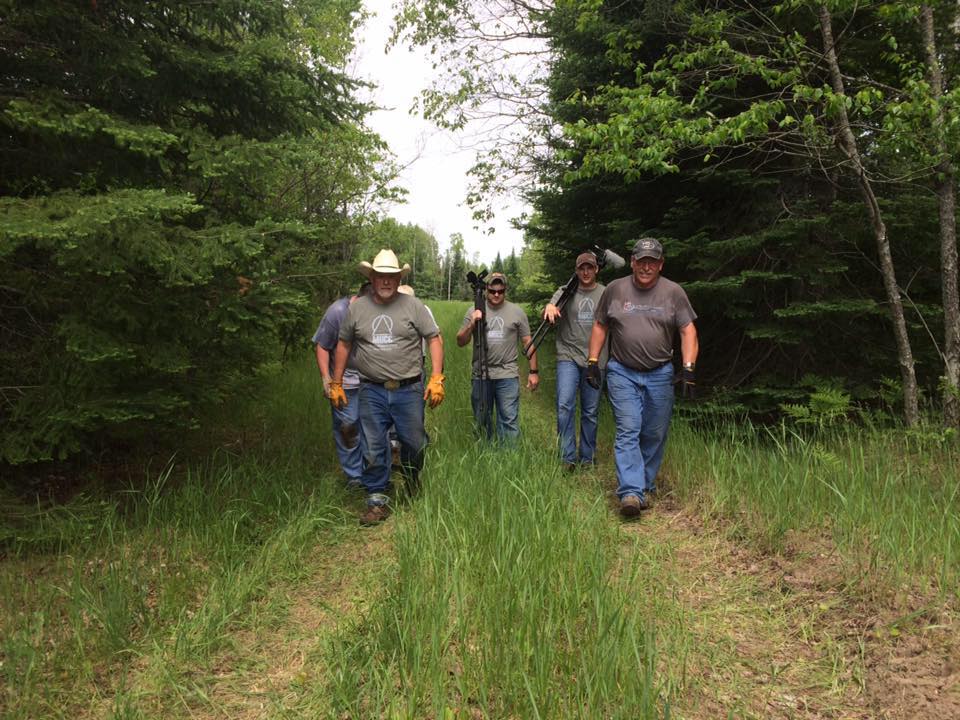 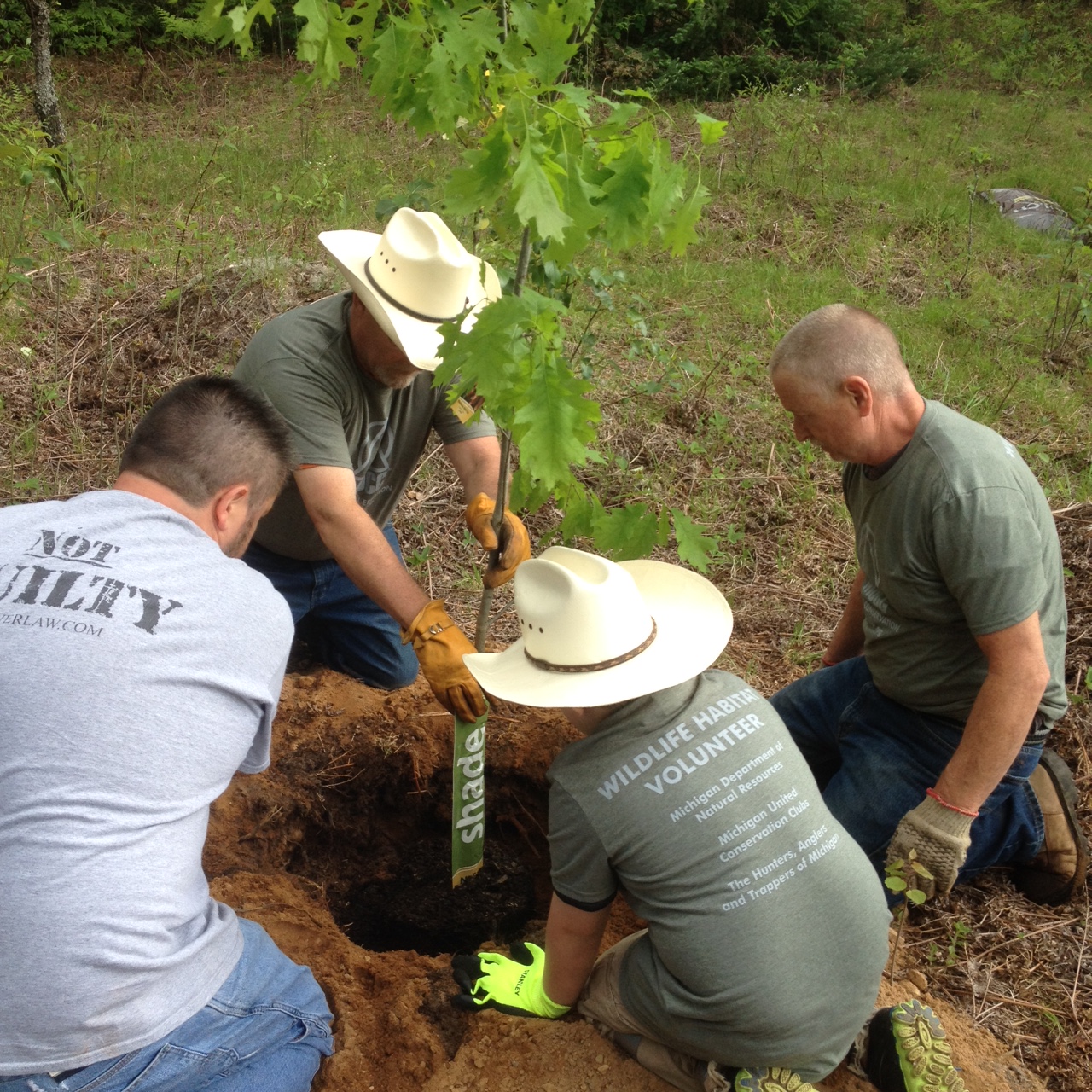 Volunteers planted a total of 77 trees in four different wildlife openings along an access road off of Fisherman Trail. The holes for the trees were pre-dug with the tractor by Huron Pines AmeriCorps member Hunter Fodor to make the workday as productive as possible. Volunteers were extremely grateful for his prep-work but still put in a hard day’s work planting, mulching, and installing fencing around the trees to deter the area’s elk and deer from browsing them.  We started the day by gathering in the camp area at 8 am for breakfast burritos prepared by RMEF’s State Chair, Dan Johnson, and Joey Blata as well as Dan’s grandson, Cayden Holmes who made a great assistant chef. 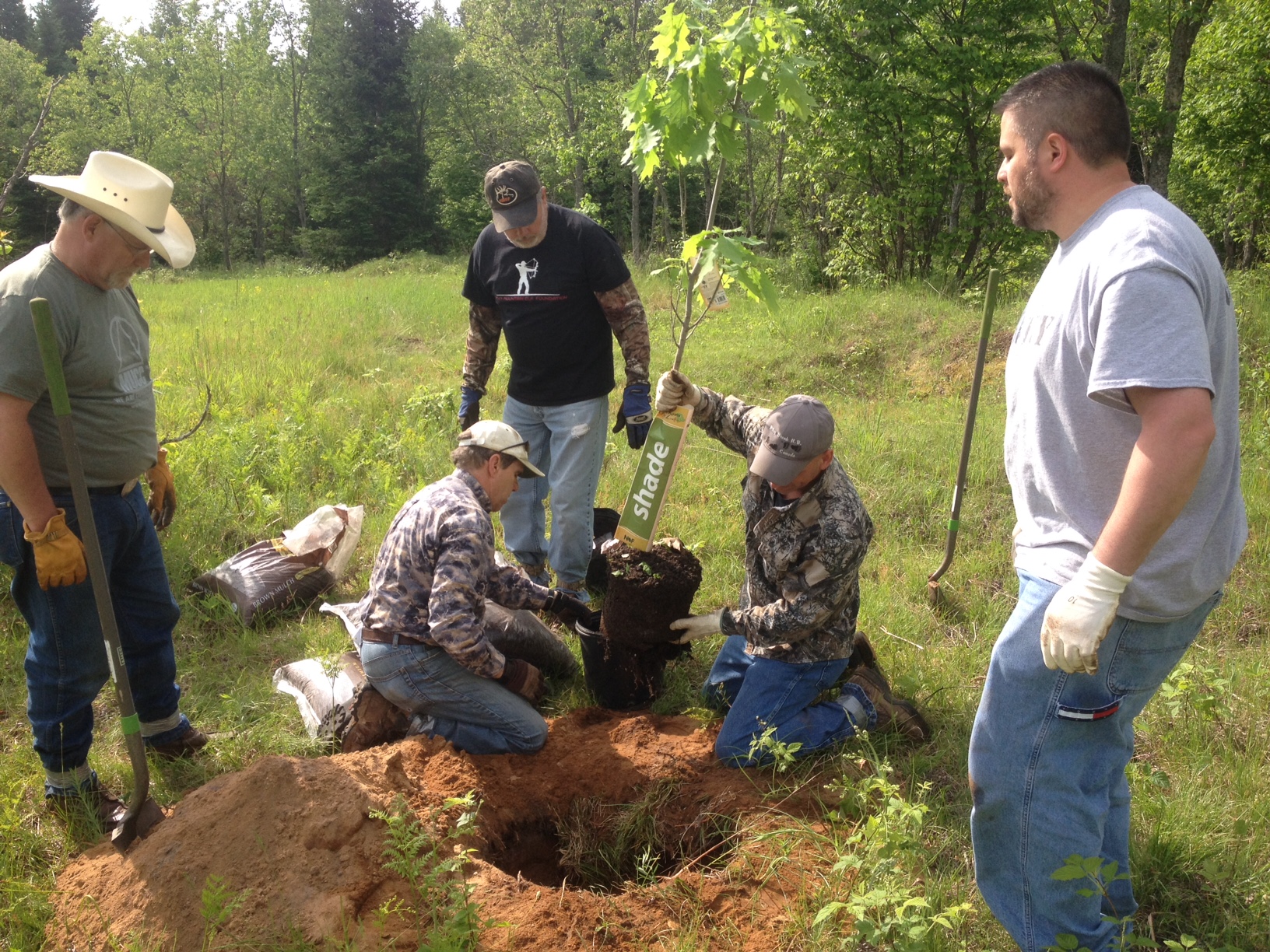 After all the volunteers that we expected had found their way down the narrow, muddy two-tracks to the project site, a quick run through of introductions and project overview was given and groups split up to begin the days’ tasks. With 18 volunteers, things started moving pretty quickly. Each person found a task that fit for them and got to it.  Groups of three volunteers grabbed a tree, a shovel, and two bags of mulch and started heading to a pre-dug hole on the edge of the first opening.  The holes were marked on a map and tagged to be planted with either a fruit (apple) tree or a shade (oak) tree. Hunter Fodor along with the DNR Wildlife Assistant, Miranda Millikin and PRCA Intern, Krista, drove the tractor and truck towing trees and mulch along to the next opening to have the supplies dropped off and ready for volunteers to carry to their designated locations. 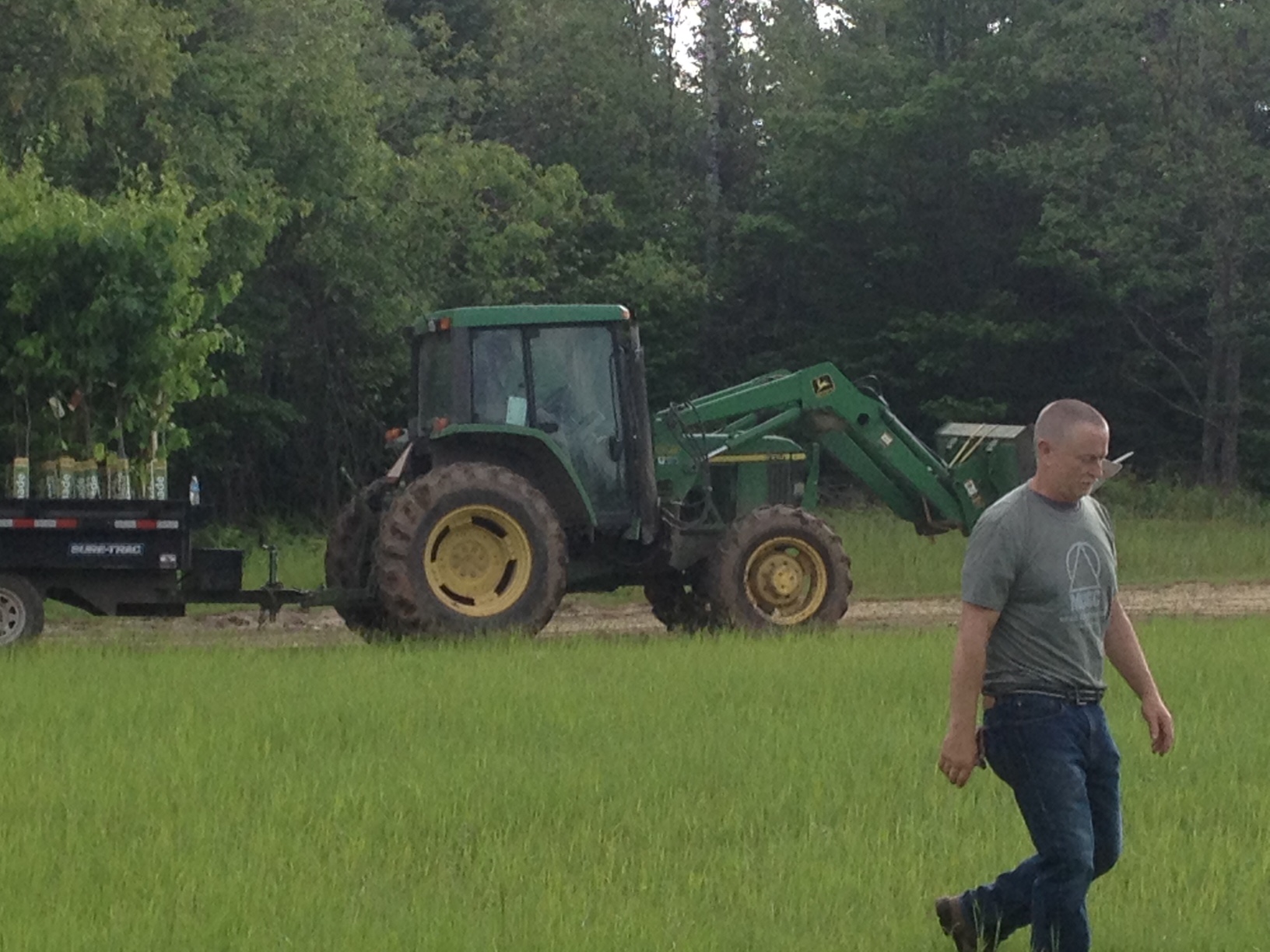 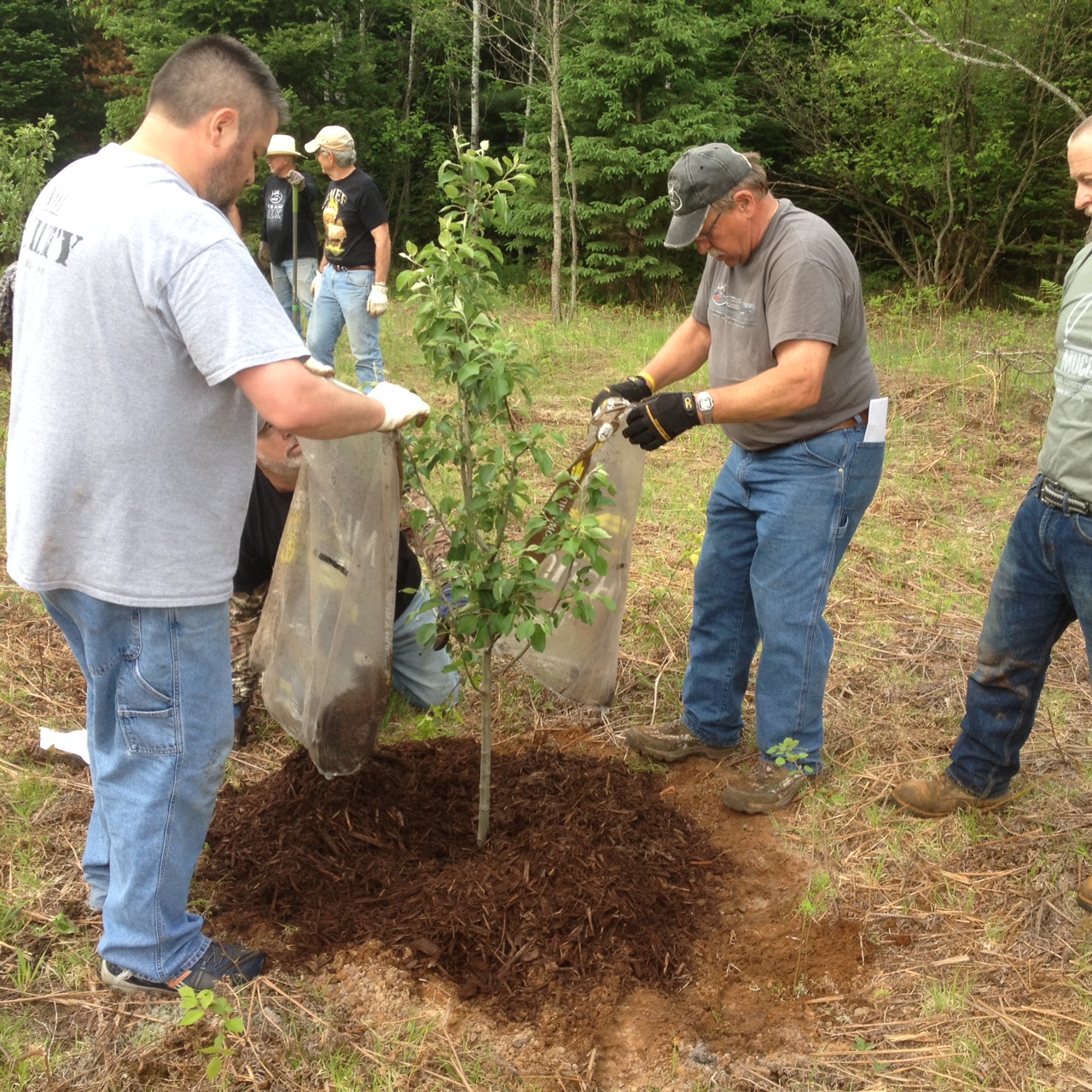 By the time lunch was on the grill, volunteers had planted all 77 trees. It was a perfect time for a lunch break after having a small hesitation with the mulch truck and having to carry bags of mulch over our shoulders to the planting sites. Drew Youngedyke made the trip to attend the event and couldn’t have picked a better one to put functional fitness into practice! While there are light duty tasks available at all events, Drew was happy to volunteer for the heavy duty work and carry bags of mulch as well as drive the T-posts into the ground for the fencing around each tree. I think this was exactly the workout he had in mind for the Train to Hunt Challenge he will be competing in mid-July. 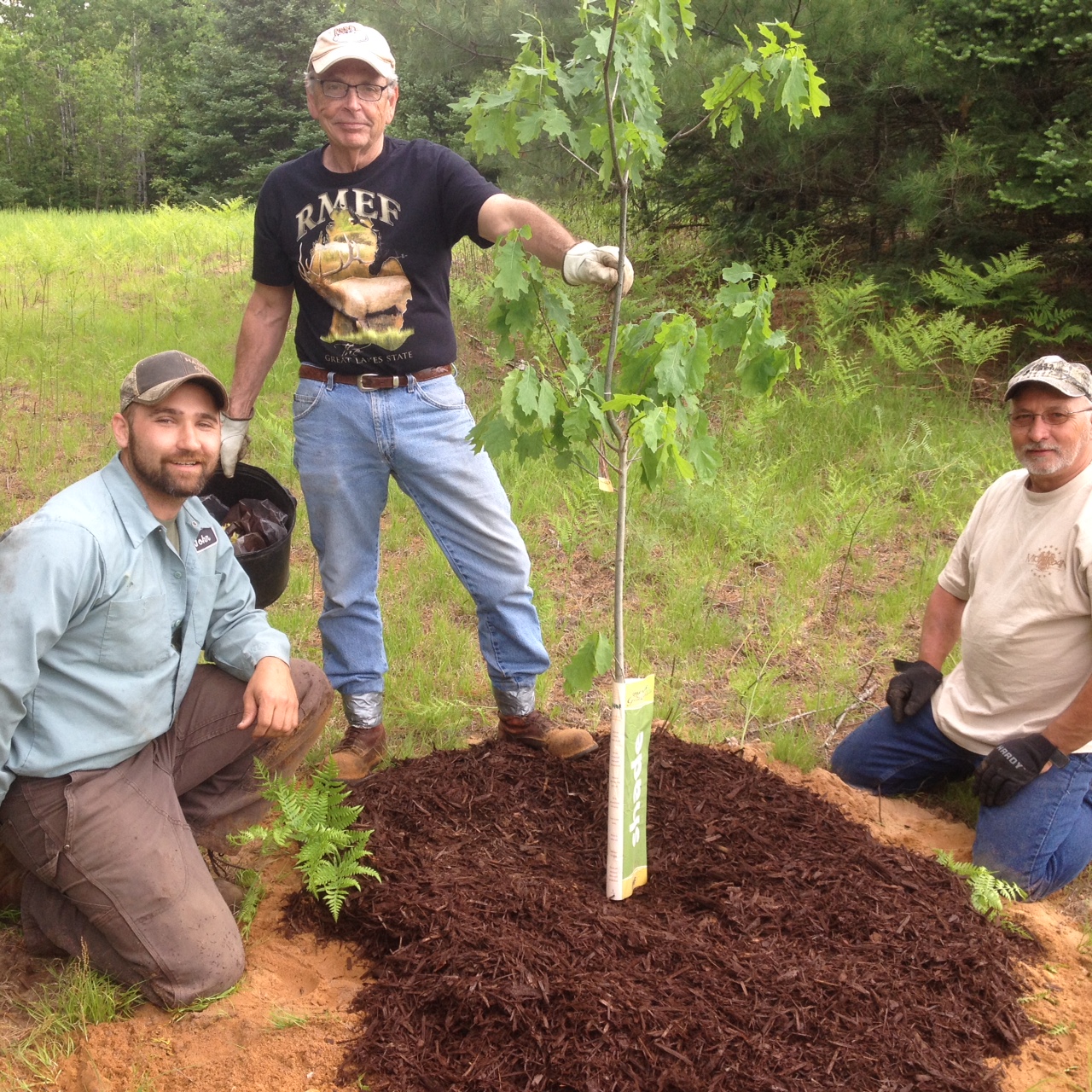 After a great lunch break, volunteers got right back to work and installed a piece of 6ft by 6ft fencing around each tree. The fencing is secured 2ft off the ground on the T-posts so that it protects the tree up to 8ft. This will prevent the terminal crown from being browsed by the area’s elk; there were a lot of signs of them in the fields! As always, the group with RMEF alongside volunteers with MUCC including Bethy Williams, Martin Strausbough, and Mark Sommerman made this workday productive and fun. Thank you to everyone who traveled from as far as Garden City and Montague to help out! 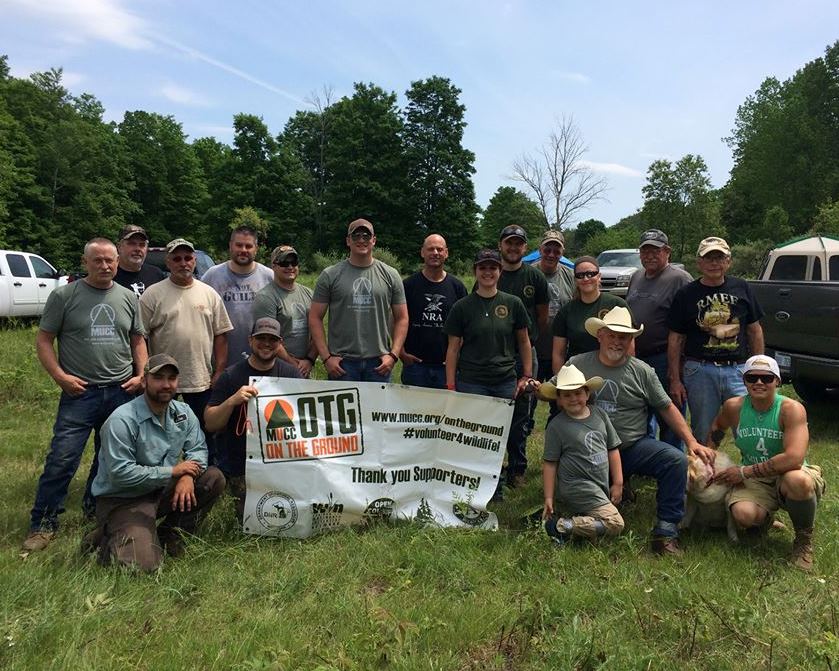 Next up, join us at the Haymarsh Lakes State Game Area on Friday, June 17th at 10 am to build brush piles for rabbitat. This project will kick off our Annual Convention being hosted at the Holiday Inn of big Rapids over the remainder of the weekend. See more details and RSVP for wildlife here!

Posted in On The Ground and tagged Blog, Habitat, Michigandnr, Mucc, Ontheground, OTG, publiclands, RMEF, volunteerforwildlife, weareconservation, Wildlife
← In the Field: How to Start a CooperativeDNR SEEKS COMMENT ON TERRESTRIAL INVASIVE SPECIES PLAN →