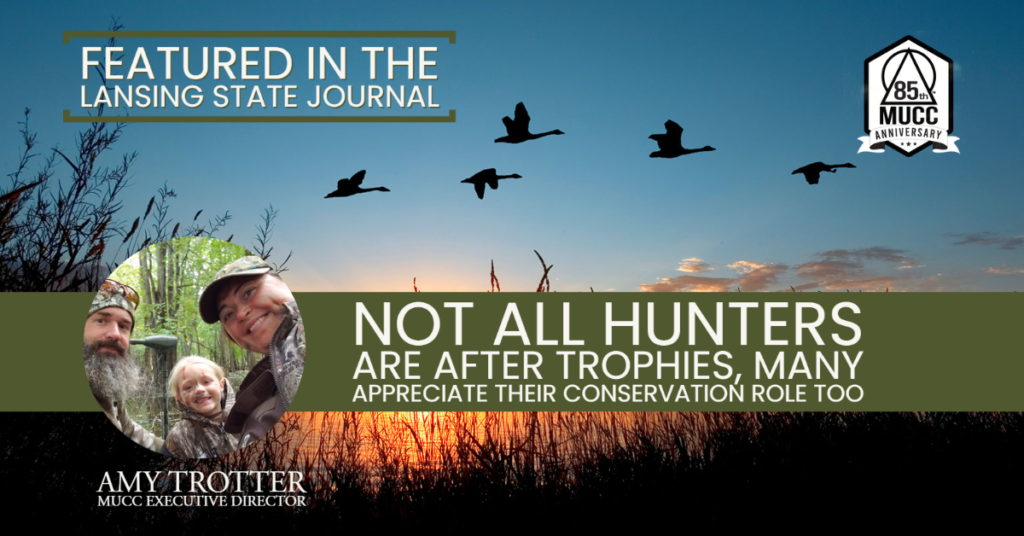 The following is an editorial published in the Lansing State Journal on April 20, 2022 by MUCC Executive Director Amy Trotter.

Anti-conservationists have been parading the term “trophy hunting” around at legislative and Natural Resources Commission meetings to conjure up images of leather-clad barbarians slaughtering animals indiscriminately. The term is fabricated by animal rights activists, and purposely intended to paint legal and ethical conservationists in a negative light — and pad their bottom line.

For too long, these activists have gotten away with using, at best, willful ignorance and, at worst, outright lies to spread misinformation about hunters, trappers and anglers. Multitudes of recovered species in the United States, both hunted and not hunted, owe their recovery to hunters and the North American model of wildlife conservation.

Michigander’s trapping, hunting and angling roots run hundreds of years deep. Yet, back then, there were no regulations or restrictions on hunting and trapping and the commercialization of our wildlife led to significant depletion of natural resources. Thankfully, in the late 1800s and early 1900s, conscientious hunters, anglers and trappers stepped up and formed what would become the modern-day conservation movement.

This model has been the guiding principle of wildlife management in this country for over 100 years. It follows seven principles — including that wildlife is held in trust for all citizens, wildlife may only be killed for legitimate, non-frivolous purposes (protecting property, food, fur, population control, etc.) and scientific management must drive decision making.

The term “trophy hunter” or “trophy hunting” fails to acknowledge that hunters serve several significant roles in wildlife management such as population control for white-tailed deer, raccoons, wolves and everything in between.

The most alluring aspects of hunting for many people is ethically-sourced, organic protein and the deeper connection with nature and the outdoors that conservationists experience.

Anti-conservationists ignore that fish and wildlife, including wolves, have thrived thanks to hunters and anglers. When wolves were listed under the Endangered Species Act in 1974, biologists set a population goal of 100 wolves. The Michigan Department of Natural Resources took it further and established a state minimum viable population goal of 200. The minimum winter count is now at 695 wolves.

During the recent wolf listing and delisting merry-go-round, anti-conservationists did not argue wolves’ recovery — instead, they focused on technicalities in the California federal court.

No wildlife has been extirpated due to hunting since the inception of modern conservation. We can look to the recovery of many species — including the gray wolf, sandhill crane, Canada goose, Kirtland warbler, Karner blue butterfly and lake sturgeon — and thank hunters, trappers and anglers for their conservation efforts and dollars. They are funding, almost exclusively, wildlife management in Michigan.

The conservation model works: Trust our biologists and help manage species with science — not emotion, misinformation and propaganda.

To protect your rights to hunt, fish and trap and continue to fight the anti-hunting rhetoric, join MUCC today: http://bit.ly/JoinMUCC