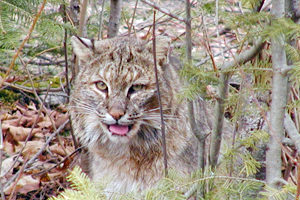 This recap includes everything that MUCC felt was relevant at the NRC meeting last Thursday except for the topic of CWD. A more intensive and thorough release will include MUCC’s take on the CWD proposal and what the organization likes or would like changed.

Bobcat regulations, squirrel season changes and financial updates were all on the agenda at Thursday’s Natural Resources Commission meeting.

A decision was made by the commission to reduce the bobcat limit to one, with the exception of private landowners in the Upper Peninsula being allotted a bag limit of two.

The DNR Fisheries Chief Jim Dexter presented a 2018 fiscal year budget of $30.6 million before the Policy Committee on Finance and Administration. About 65 percent of the budget is for fisheries resources management, and 32 percent is going towards the fish production at hatcheries. Jim Francis from the fisheries division spoke about a proposal to allow muskellunge spearing on Lake St. Clair. The department has recommended not to go through with the proposal over concerns with a decline in muskellunge population and catch rates.

put towards disease management. There will be an increase to $4.2 million for disease management in the 2018 fiscal year. There is a breakdown of 70 percent going towards chronic wasting disease, and 30 percent towards bovine tuberculosis. Erik Eklund outlined the 2019 DNR budget before the committee, which has been approved through the legislature and is awaiting the governor’s signature.

The Michigan State Parks Advisory Committee got an update on the Belle Isle Strategic Management Plan. Belle Isle State Park has the most visitors of any state park in the nation — totaling about 4.2 million annual visitors. Total investments over the last three years to improve the satisfaction of those visitors has equaled about $48 million. Looking forward, there are many construction projects to be completed or currently underway at a cost of over $6 million, with much of the funding coming grants. These projects include storm drain repair, stormwater assessments, Iron Belle trail design, picnic areas, and a boating access site assessment, as well as invasive species control.

Oakland County is working with the DNR to create an off-road vehicle park near the Mt. Holly Ski and Snowboard Resort. This park would entail 130 acres of trails that was a prior gravel mining pit. The land that was acquired by the state in 2014 has a few more changes to undergo, and Oakland County hopes to have it ready by July of next year.

Posted in Policy
← MUCC Executive Director Testified on the Effects and Mismanagement of CormorantsIn the Field: National Pollinator Week →