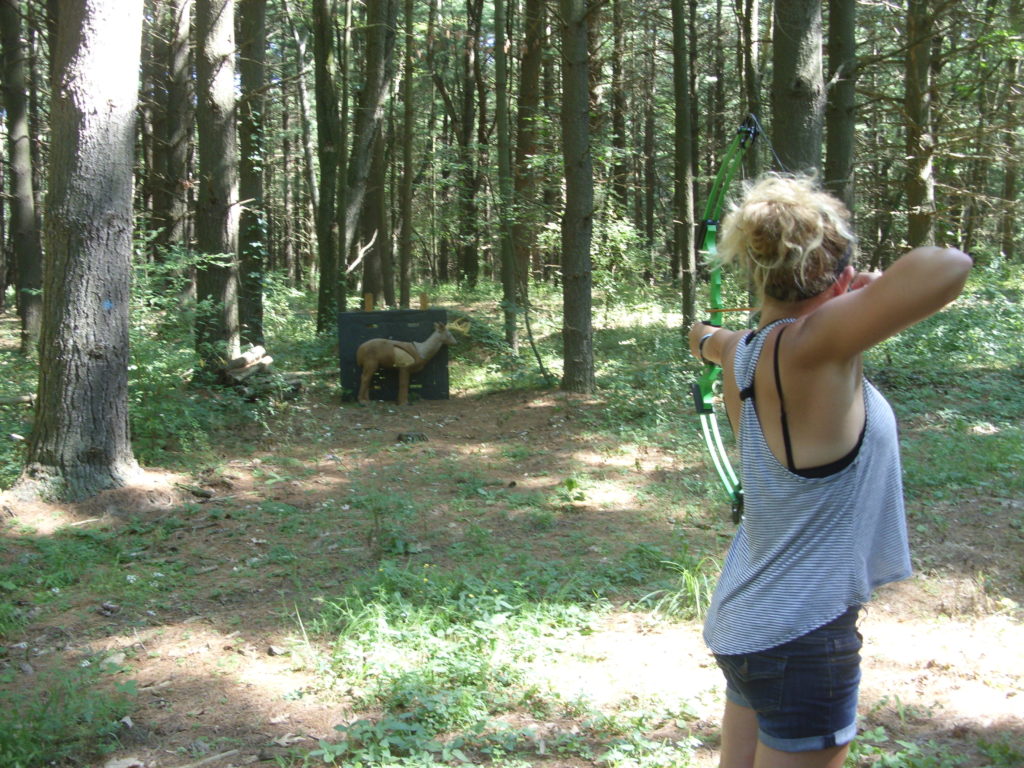 Now that the campers have left and the inventory is put away rental season begins.  We have rental groups using the facility at Cedar Lake every weekend until the MUCC board meeting in mid-October.  This past Sunday August 9th was the 3rd annual Huron Valley Conservation Association Youth Day.

The Huron Valley Conservation Association has been a major supporter of the camp program.  They sent 15 kids to camp this summer!  They decided renting the property and coming out for a fun day of outdoor activities would be good for their club members and a good way to recruit new members. The day was facilitated by Tyler and I and we ran a program very similar to what kids would experience if they came to camp for a day.  We fished in the morning, got kids on the archery range, shot the .22s and spent some time on the water in the kayaks.

This year at the club brought about twenty kids and forty adults. The day was started with giving everyone the opportunity to try their hand at fishing on Cedar Lake. We had some MONSTER fish that were caught, ranging in size from two inches all the way up to an eight inch bass. Several of the kids had never put their own worm on a hook so it was good to see the progression of playing with the worms to landing some fish. Cedar Lake can be pretty up in the air when it comes to the fish bite so it was nice to get the kids into some action.

After archery it was time for lunch. The club members brought their own cooks and everyone was treated to a great meal of burgers, hotdogs, and pulled pork.  Everyone ate their fill and there were plenty of leftovers to take home.  Following lunch we gave everyone the chance to shoot .22 rifles at the range. The shooters were able to keep the target that they were shooting at, which in turn, seemed to create a lot of friendly trash talking. Everyone took a few rounds on the .22 rifles and the siblings and parent rivalries got pretty intense.

Once the range was wrapped up for the day it was time to cool off.  We headed down to the lakefront to go kayaking and swimming.

For a lot of these kids, and even the adults, this day was an opportunity to try something for the first time. I had many of the parents and grandparents tell me that Michigan OutofDoors Youth Camp for Kids is one of the best opportunities for these kids to get in the outdoors and also learn how to be good stewards of the environment. Everyone left happy and many of them would have stayed longer if they could. We would like to thank Kris Matthew and the Huron Valley Conservation Association for giving us the opportunity to spend the day with some of their youth and get them excited about the outdoors.