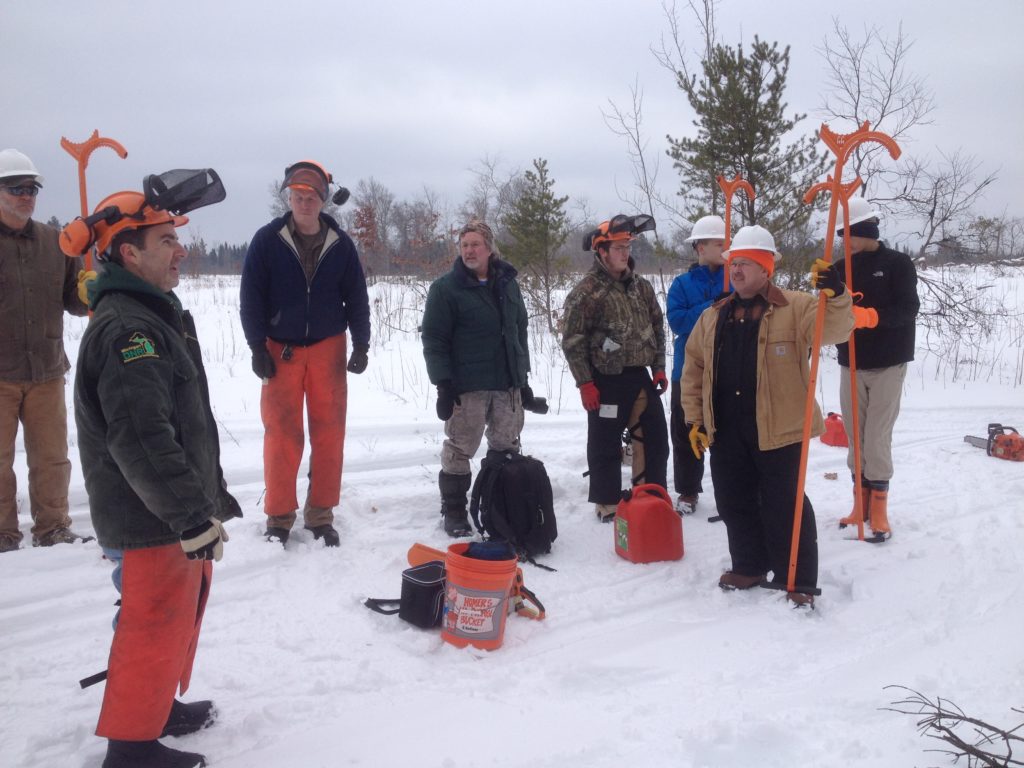 This weekend, MUCC’s Wildlife Habitat Program will be heading to the Grayling State Forest to complete the annual snowshoe hare habitat restoration project. The area’s DNR Wildlife Biologist, Brian Piccolo, stated: “Unfortunately, snowshoe hare populations have steadily declined over the past few decades, and research suggests that this decline is due partially to shorter winters and less snow cover due to climate change.” Snowshoe hare have an adaptation that changes the color of their fur to better match their surroundings. This means that their brownish-cinnamon colored fur in the summer will molt- grow new, white fur- in the winter. With a lack of snow, their white fur stands out to predators, making them an easy target. One way we can help the declining snowshoe hare population is to provide better cover to help camouflage them in their habitat. 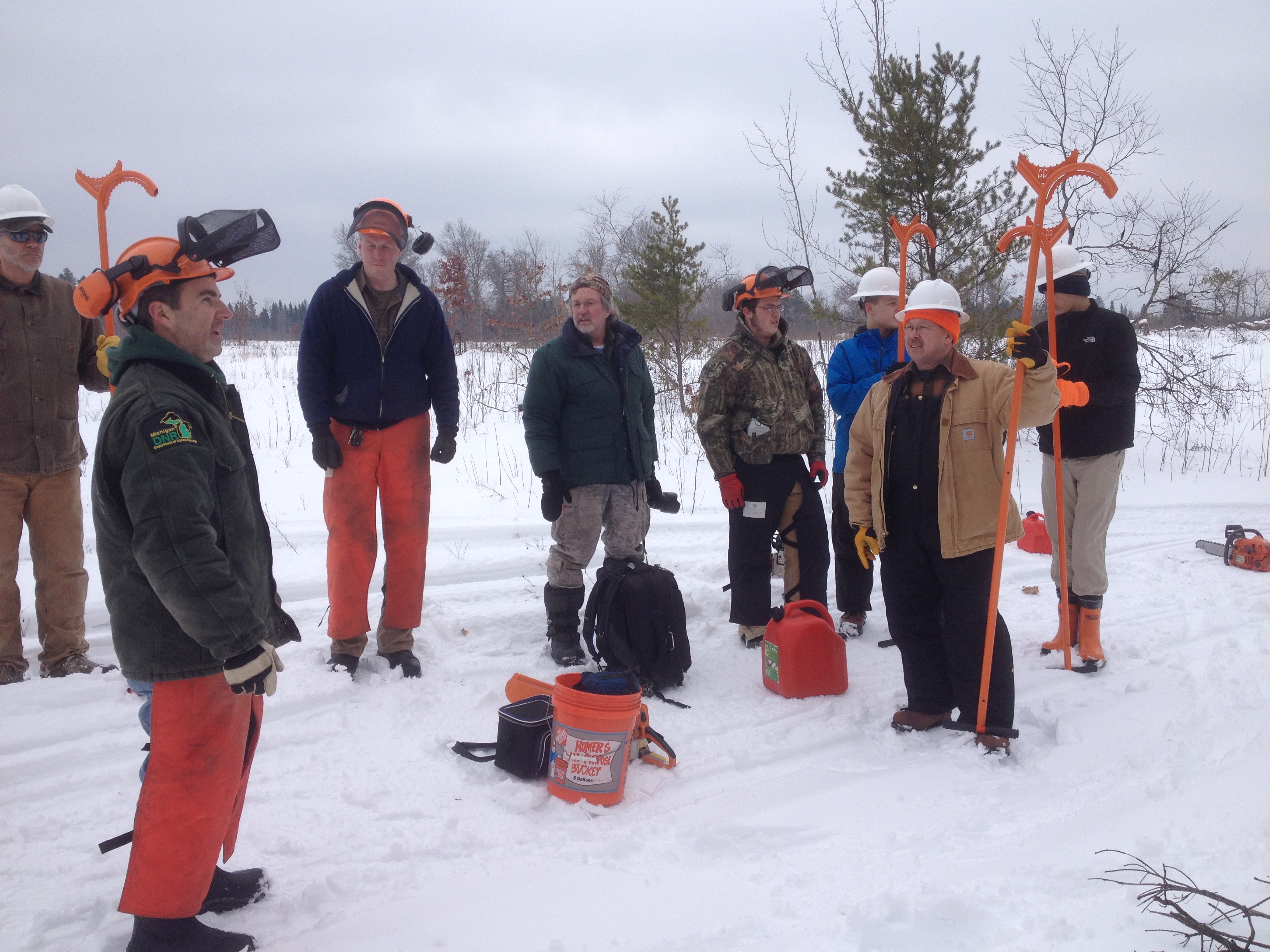 Two years ago today was my first On the Ground habitat project with MUCC and in just two days I will be headed to the Grayling State Forest to complete the same project; hinge-cutting black spruce and balsam fir to create horizontal cover for snowshoe hare habitat. Each year, the area’s DNR Wildlife Technician, Tim Riley, and Piccolo locate an area in a lowland conifer type forest, with sign of snowshoe hare, that is in need of habitat restoration. This will be the fourth consecutive year that MUCC’s Wildlife Habitat Program has coordinated with Piccolo and Riley to continue the hare habitat restoration. In previous years, Piccolo has reported the use of the habitat by snowshoe hares (restored with these projects) within just a couple of weeks.

To ensure that optimal cover is being restored for the hares, volunteers will first meet at the Grayling State Forest Field Office, where Piccolo will give an overview of the project site. Using forestry maps covering various forest types in the project area, the group will determine which trees to look for to distinguish the lowland conifer stand from an adjacent cedar stand. The ideal tree species for this habitat project are black spruce, white spruce, balsam fir, and an occasional cedar or jack pine. These conifers are tall trees with dense needle cover on ample branches- providing a large area of horizontal cover when carefully hinge-cut. Volunteers utilize habitat hooks 8ft-10ft long to slowly push the trees (no more than 6inches in diameter for safety) over after the sawyer has cut one-half to two-thirds of the way through the tree trunk at about chest height. This technique allows enough of the cambium layer of the tree to remain attached to keep the nutrient flow to the branches to maintain its needles. 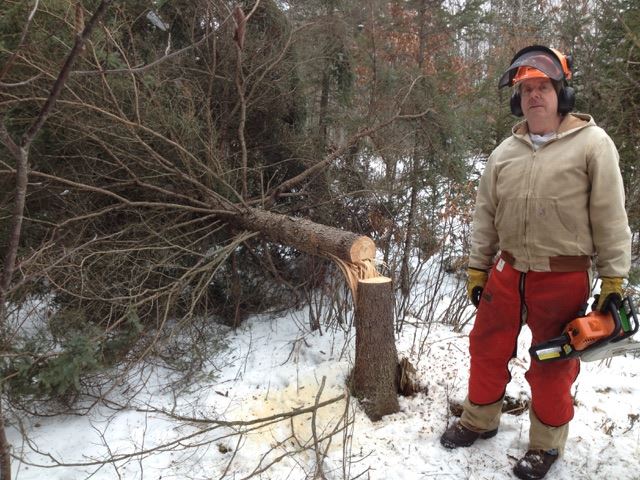 THIS PROJECT BRINGS US TO THE END OF JANUARY, BUT HERE’S WHAT’S COMING UP NEXT IN FEBRUARY:

On Sunday, February 19th, we’ll be clearing an opening for a wildlife food plot in the Gratiot-Saginaw State Game Area with the Midland-Dow High School Conservation Club; see details and RSVP to volunteer here! Also on Saturday, February 25th, MUCC will be partnering to support the Annual Youth Rabbit Hunt at the Crane Pond State Game Area. Participants utilize several of the brush pile areas that have been built by volunteers with MUCC’s projects in the past. For more details about the youth hunt at Crane Pond SGA or to reserve a spot, call 269-244-5928 (deadline is Feb. 18th, 2017).