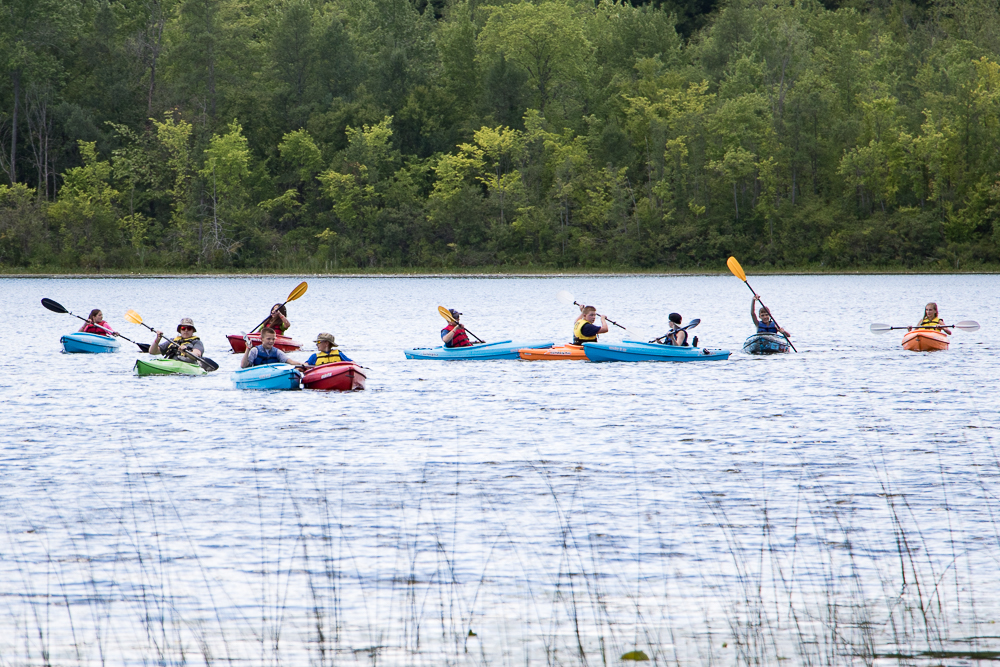 With the camp season, crossing the midway point the programming and activities really picked up this week.  For our third week of campers, an older age group joined us.  This week we were home away from home for 68 campers ages 12-15.  These campers traveled from all over the state and some even came from as far away as North Carolina to spend their week with us.

For the older campers, we offer a more advanced skill building focused curriculum. Each of the three programs this week has a more specific focus than the general conservation connection camp many of our younger kids attend.  For the older kids, we offered the Hunting Heritage program, Primitive Skills, and Stewards in Training.  With the help of our many excited and eager volunteer guest speakers, this week’s group was able to see some first-hand hunting and trapping techniques as well as push themselves on some high adventure activities.

Our Hunting Heritage program spent Tuesday morning with Michigan Out-of-Doors Editor Nick Green and his dog Calvin.  They demonstrated techniques for upland bird hunting.  They also showed the dedication it takes to have a well-trained bird dog. Anytime we have a dog on property they are a big hit with the kids!  On Wednesday, Hunting Heritage spent time with Chris Hillman from the Grand River Chapter of the Michigan Duck Hunter Association.  Chris is a state champion duck caller and he brought four different decoy spreads to show the kids.  He had the kids setting decoys in the water, placing them in fields and practicing setting up blinds.  He also gave a short session on calling techniques and had the kids quacking away the rest of the afternoon.  The Hunting Heritage kids also had an opportunity to visit the Chelsea Rod and Gun Club and spend time on the trap and rifle ranges.

Another guest speaker we had this week was Dale Hendershot.  Dale is with the Michigan Trapper and Predator Callers Association. He spent a day with the Primitive Skills campers teaching them the basics of trapping.  Showing the campers how to be ethical trappers and how to earn some money doing something they love.  All of the knowledge Dale had about trapping, fascinated the kids and many of the kids are talking about starting their own trap lines this winter.

Our final guest speaker for the week was Dave Berquist.  Dave also joined us for our Primitive Skills program and spent time educating the campers on tool making by the Native Americans of Michigan.  He also spent some time showing off his impressive geological collection of rocks and minerals that he has picked up during the years in Michigan.  The kids were interested in the minerals he brought to show them and they were able to learn more about what life was like in our region over 300 years ago. 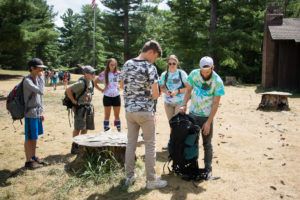 While Hunting Heritage and Primitive Skills were building their skills, Stewards in Training campers were going on adventures.  Highlights of the week were a trip to a high ropes course, where they were about 30 feet up in the air walking across balance beams, climbing ladders and swinging from ropes.  There was also a zip line exit of the course so the campers have to zoom down from the trees to the ground.  This camp also gets to explore the Waterloo State Recreation Area.  They headed out on a 7-mile backpacking trip and camp at a rustic site near Green Lake.  They set up camp, cooked over a fire and watched the stars.  After sleeping in their tents or hammocks, they head back down the trail the seven miles again and return to camp.

With another week in the books, we are already planning and prepping for week four. Week 4 is filled to capacity and the Riley Wilderness Youth Camp and another round of conservation connection campers will join us.  The spirits are high and we are looking forward to another exciting week here at Cedar Lake.