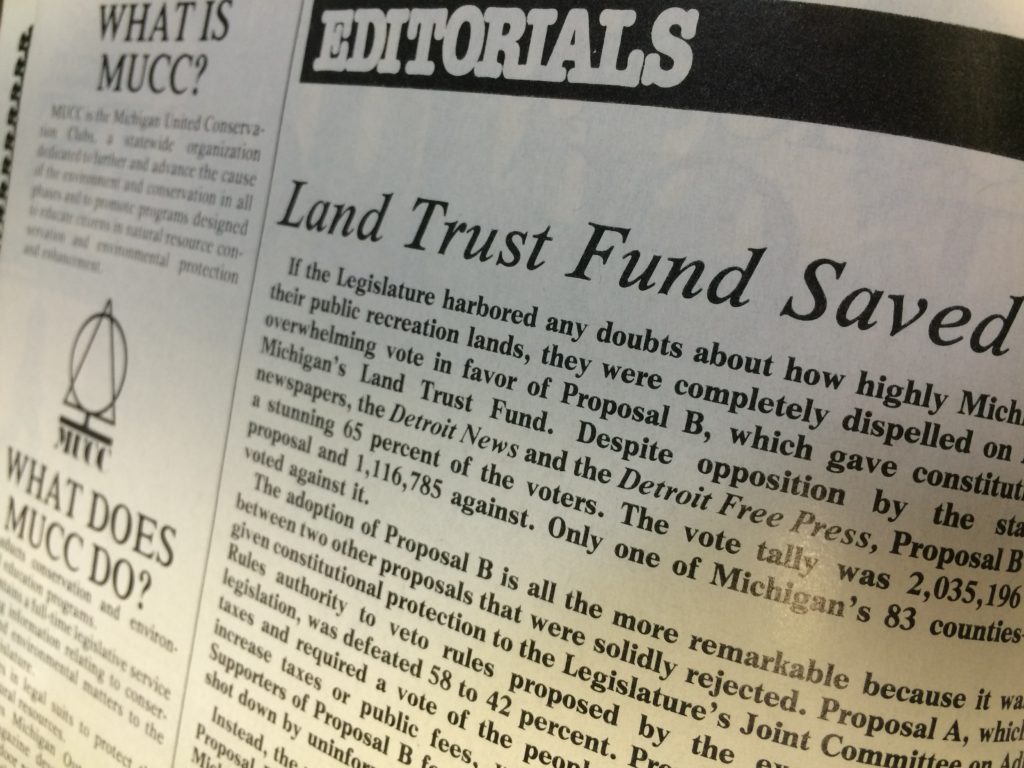 Sneak Preview! This article will appear in the May/June 2016 issue of Michigan Out-of-Doors.  Subscribe today by becoming a member of MUCC!

In my last column, I chronicled how the Michigan Natural Resources Trust Fund was achieved 40 years in 1976. Almost immediately it faced challenges from politicians who wanted to divert it for non-conservation or outdoor recreation uses and from those who just plain don’t like public land. It has taken a vigilant, concerted and united effort to protect it and uphold its promise to future generations to compensate them with public recreation land for their share of the mineral resources we use today. 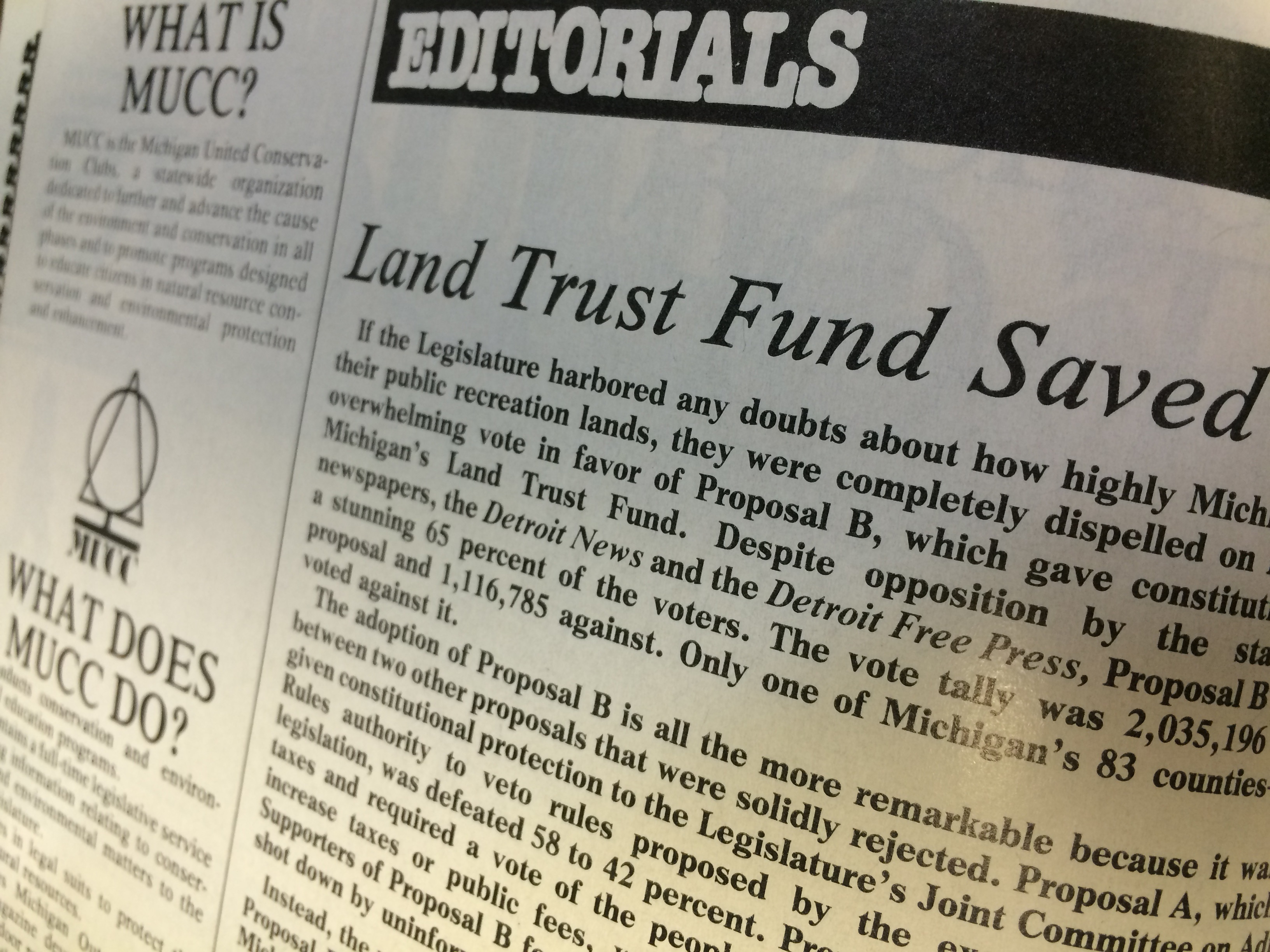 Until 1984, there was no protection for the Trust Fund from legislative raids. While the royalties from state-owned oil and gas development were earmarked for the Trust Fund, and the purpose of the Trust Fund was to ensure public outdoor recreation land for future generations, the Legislature could tap it for unrelated issues, such as was suggested last year for roads.

Michigan United Conservation Clubs recognized this problem, though, which we described in an editorial in the May 1984 issue of Michigan Out-of-Doors: “[T]he Legislature has found the fund to be a convenient source of emergency revenue and over the years has siphoned off millions of dollars to balance the budget and meet other needs of the moment.”

On November 6, 1984, voters had their say on Proposal B, which protected the “Land Trust Fund” in the Michigan Constitution so that funds from oil and gas royalties could only be used to purchase new public recreation lands, areas of special scenic beauty, lands of special environmental importance or to develop outdoor recreation facilities.

In a letter encouraging its passage, Governor James Blanchard described the purpose of the fund:

“The cornerstone of this proposal is the principle that funds received by the state from oil, gas and other mineral extraction on publicly-owned land should be used to provide benefits not only to our citizens today, but to subsequent generations as well.”

The principle rests on the foundation that the oil, gas and minerals that are being extracted belong to all current and future citizens of Michigan; therefore, the revenue derived from their sale today should benefit all current and future citizens of Michigan. Only public land can do this. Public land is open to every citizen to enjoy, and only in public ownership can its value to future generations be conserved.

Kerry Kammer, who had sponsored the original bill creating the Trust Fund eight years earlier, said, “The wonderful thing about the Land Trust Fund program is that is is truly for tomorrow’s citizens. We must protect the fund to make it inviolable to raids in the future.

In our November, 1984 issue of Michigan Out-of-Doors, we included a special section encouraging a “Yes” vote on Proposal B.

The problem stark. By 1984, the Trust Fund should have had $150 million in it for public recreation land. However, because of legislative raids, it had just $8 million! Jean Worth, former editor of the Escanaba Daily Press, wrote at the time that “Diversion of earmarked funds is a political sin of robbing Peter to pay Paul, with the excuse that government need not be honest: Make it impossible with Proposal B.”

And the voters did. 65% of voters and 82 out of 83 counties (Schoolcraft being the exception) voted to save the Land Trust Fund. MUCC had spearheaded the effort to pass Proposal B, but we weren’t the only ones. In addition to the Michigan Parks and Recreation Association, two companies in the oil and gas industry were instrumental: Shell Oil Company and Northern Michigan Exploration Company.

That shouldn’t have been too much of a surprise, though: after all, the Michigan Oil and Gas Association (MOGA) has been a supporter of the Michigan Natural Resources Trust Fund from the start: former MOGA Executive Director Frank Mortyl has told me of multiple meetings and one epic dinner that he had with Tom Washington during the formation stages in 1976.

That is why throughout this year, we are celebrating the 40th Anniversary of the Michigan Natural Resources Trust Fund with MOGA. Visit www.michiganoilandgas.org for more information.

To volunteer to improve wildlife habitat on public land, visit www.mucc.org/ontheground. We’ll have more on the history of the Trust Fund in the next issue!