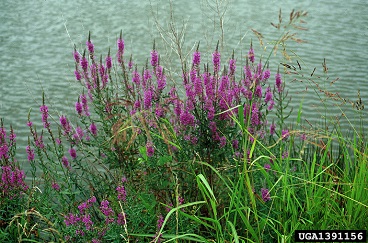 Purple Loosestrife is such a pretty plant! Of course it’s pink/purple flowers catches the eye, but is it benefiting our Michigan ecosystems? The species was introduced to the states from various parts of Asia and this pretty plant has made its way into almost every state in the US. Read on to see the affects purple loosestrife can have on our natural resources!

Reproduction rates for the plant are rapid, which can lead to their exponential growth in wetlands. Millions of seeds can be found in one plant, which shows how easily a new plant could propagate from a parent plant. As the purple loosestrife grows in a wetland, it aggressively invades native ecosystems. As seeds propagate in these wet environments, they reduce the fitness of native plants. The purple loosestrife can produce 50 shoots, which tends to suffocate other plants and eventually hinder it from photosynthesizing and respiring. Proliferation of the purple loosestrife is often associated with diversity loss of vegetation. This overall decreases ecological interactions in these patches of environment.

The plant develops a different composition which affects how animals nest for shelter, find food, and even reproduce. Purple loosestrife creates dense canopies which can’t be penetrated by native organisms such as; fish, birds, and other small mammals. With alarmingly fast reproduction rates, purple loosestrife can out-compete native vegetation in wetlands or areas partially inundated. This plant could change the chemistry of the wetland, and create conditions not favorable for native species. Weevil and beetle in the past, have been used to contain purple loosestrife and keep its population density under control. This is a way in which scientist try to control the purple loosestrife. Because of the flower’s attractive appearance, the species of plant is also used for landscape purposes. Though the species does not generally benefit the environment;for beekeepers, the purple loosestrife serves as a source of nectar for pollinators. This may be one of the few benefits which the flower introduces to Michigan environments.

Allowing the perennial plant to establish is detrimental to native wetland plants in Michigan. Native plants serve as food resources for other native organisms. Replacing the native wetland plants with purple loosestrife can cause a drastic change such as; making the trophic cascade collapse. Without native primary producers, we will see the effect of bottom-up controls in this ecosystem. Nutrients from invasive or native plants in the ecosystem will ultimately influence trophic levels in wetland niches. If allowed, the purple loosestrife will out-compete native plants and will have negative ecological implications. As good stewards and conservationists, we should seek to limit the propagation of purple loosestrife to protect our native wildlife.