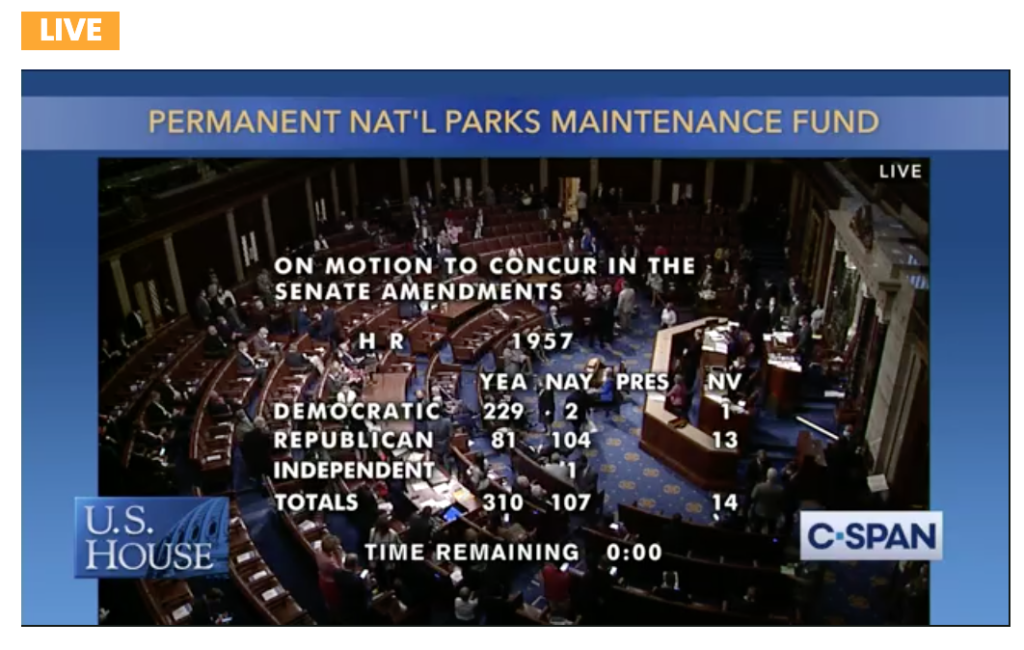 The Great American Outdoors Act (S. 3422/H.R.7092 & H.R.1957) passed out of the House of Representatives by a margin of 310-107 on Wednesday. We are now one important step closer to full, permanent funding for the Land and Water Conservation Fund (LWCF) and addressing the deferred maintenance backlog on federal public lands.

The LWCF has only been funded at full capacity (~$900 million) once since 1964 and federal land management agencies have accumulated a deferred maintenance backlog in excess of $19 billion. Deferred maintenance is considered debt by the federal accountants, but in reality it often makes it more difficult for citizens to utilize public lands. LWCF provides funding for both public land access and improvement.

If signed by the President, this legislation will permanently dedicate full funding to LWCF, and create the National Parks and Public Land Legacy Restoration Fund, which would utilize up to $1.9 billion annually to improve infrastructure on federal lands in the next five years. Funds for both of these originate from royalties charged for energy development on federal lands or waters, which are mainly concentrated on the continental shelf in the Gulf of Mexico.

“I am proud that MUCC members and staff played a role in advocating for the passage of this legislation,” Trotter said. “This funding will go towards projects that will allow future generations to enjoy the natural resources and wild places of this country.”

LWCF is often hailed as one of the most successful conservation tools for conserving fish and wildlife habitat, opening access to fishing and hunting opportunities and supporting the outdoor recreation industry.

Since 1964, a number of public land sites in Michigan have benefited from LWCF, including the Huron, Ottawa and Hiawatha national forests, Sleeping Bear Dunes National Lakeshore and Shiawassee National Wildlife Refuge. It is likely that many thousands of acres of public land in Michigan could benefit from the full funding of this program through the Great American Outdoors Act.

Beyond LWCF, this bill will also address the deferred maintenance backlog on lands managed by the National Park Service, U.S. Forest Service, Bureau of Land Management, U.S. Fish and Wildlife Service and Bureau of Indian Education. According to research conducted by the Congressional Research Service, these five agencies have a combined deferred maintenance backlog totaling more than $19 billion. The dedicated funds allotted in this bill will be divided among these agencies, with the National Park Service will receive 70 percent of the funds, the Forest Service will receive 15 percent and the other three agencies will each receive 5 percent.

Nationwide, the outdoor recreation industry has created and maintained in excess of 5.2 million American jobs and $778 billion in economic expenditures. According to a study commissioned by MUCC, Michigan hunters and anglers contribute 171,000 of those jobs and $11.2 billion of that economic activity. In providing dedicated funding for these long lists of shovel-ready projects developed by public land management agencies, the Great American Outdoors Act will create new jobs and vitalize our robust outdoor recreation economies through the creation of new infrastructure and habitat conservation projects.

An identical version of this bill was passed by the Senate in June, the bill will now head to the President’s desk. President Donald Trump has indicated that he will sign this historic bill into law.

Conservation funding will remain a very relevant issue to all groups dedicated to conserving, protecting and enhancing the natural resources of this country.

View all posts by Charlie Booher →